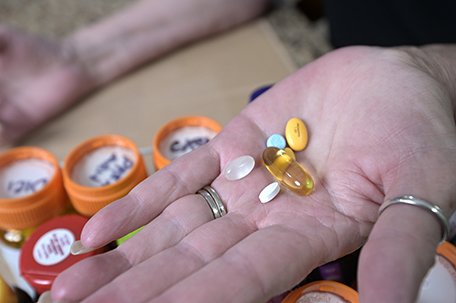 ABOVE PHOTO: Retiree Donna Weiner shows some of the daily prescription medications that she needs and pays over $6,000 a year through a Medicare prescription drug plan at her home, Tuesday, Oct. 5, 2021, in Longwood, Fla. Weiner supports giving Medicare authority to negotiate drug prices. Negotiating Medicare drug prices is the linchpin of President Joe Biden’s ambitious health care agenda. Not only would consumers see lower costs, but savings would be plowed into other priorities such as dental coverage for retirees and lower premiums for people with plans under the Obama-era health law. (AP Photo/Phelan M. Ebenhack)

WASHINGTON — After decades of failed attempts, Democrats passed legislation that aims to rein in the soaring costs of drugs for some in the United States.

It will take years for people to realize some of the most significant savings promised in the climate and health care bill that President Joe Biden signed last month.

The bill mostly helps the roughly 49 million people who sign up for Medicare’s drug coverage. But many will be left out from direct savings after lawmakers stripped cost-savings measures for a majority of those covered by private health insurance.

A look at how some might benefit from the drug savings provisions in the “Inflation Reduction Act” and how drugmakers might push back on those efforts.

For the first time, Medicare can negotiate the price of its costliest drugs.

In the U.S., “we’ve never had any entity that was negotiating on behalf of such a large group of people before,” said Leigh Purvis, the director of AARP’s health care costs and access.

That new bargaining power won’t kick in until 2025, when Medicare is able to haggle over the price of 10 drugs covered by its prescription plan. By 2029, Medicare will be able to negotiate the cost of as many as 60 drugs.

It will take some time because the Health and Human Services Department will need to develop a plan for selecting which drugs will be negotiated. The complicated rule-making process will take years to devise and face intense lobbying and scrutiny from the pharmaceutical industry, which is eager to carve out loopholes in the new rules.

“The biggest lift is definitely going to be negotiations because the secretary is establishing a whole new program, and they’re going to do a lot of hiring,” Purvis added.

The savings are expected to be huge. The nonpartisan Congressional Budget Office estimates costs could fall by as much as $100 billion over the next decade.

Which drugs Medicare and patients will save on, however, remains a bit of a mystery.

In the first year, Medicare will be allowed to negotiate the cost of 10 drugs it spends the most money on, as long as those drugs have been approved by the Food and Drug Administration for at least nine years and don’t have any rival generics on the market.

Right now, for example, the blood thinner Eliquis, used by 2.6 million Medicare recipients at a yearly cost of nearly $10 billion, would likely be at the top of that list.

That might spur pharmaceutical companies to launch new drugs at a higher price, knowing that the product’s cost will be negotiated down for Medicare, cautioned Arthur Wong, an analyst for S&P Global, a financial research firm.

PhRMA, the trade organization that represents pharmaceutical companies, acknowledged it intends to push back against the law.

“We are exploring every opportunity – including legislative, regulatory and legal — to make sure patients have access to the medicines they need, and our industry can continue to develop lifesaving cures and treatments,” PhRMA spokesperson Brian Newell said in an emailed statement to The Associated Press.

A CAP ON OUT-OF-POCKET DRUG PRICES

The bill limits how much money Medicare recipients must use for medications but, again, it will take some time for those rules to take hold.

In 2024, Medicare will get rid of a 5% coinsurance required of patients who have met the catastrophic threshold, which is currently set at $7,050 for out-of-pocket costs for drugs. Nearly 3 million Medicare patients met that threshold at some point from 2015 to 2019, according to a study by the Kaiser Family Foundation.

The following year, out-of-pocket drug costs will be capped at $2,000 for Medicare Part D, which typically covers at-home prescription medications.

HOW WILL THE PRICE OF DRUGS BE CONTROLLED UNTIL THEN?

The Inflation Reduction Act has a series of controls aimed at immediately blunting the rising cost of drugs for Medicare. The bill caps copayments for insulin at $35 per month beginning in January, but for Medicare beneficiaries only. A $35-per-month limit on out-of-pocket costs for those on private health insurance was cut.

Starting next year, drug companies will also have to pay a rebate to Medicare if they raise the cost of a drug higher than the rate of inflation. The industry regularly raises the price of drugs above inflation yearly.

A similar rule exists in Medicaid, so the Centers for Medicare and Medicaid has experience running this program, said Rachel Sachs, a professor of law at Washington University in St. Louis.

“They’ve been helpful at controlling the rate of increase,” she said of the rebates.

Only Medicare patients will benefit directly from this. A move to include people on private insurance who are sold overpriced drugs in the calculation was scrubbed from the legislation.

Some health policy experts hope this provision, along with the others in the package, will help insurance companies negotiate the price of drugs for its customers, potentially extending cost-savings to millions of people.

But others are waiting to see if the bill has the opposite effect. Medicare makes up about one-third of the pharmaceutical industry’s market, meaning companies could try to draw more profits from elsewhere.

“That could be a threat that non-Medicare payers may end up having to pay more or at least face harder negotiations with the pharma industry,” said analyst Wong.

Four things you might not know about prescription drug costs