The Birds of Boo 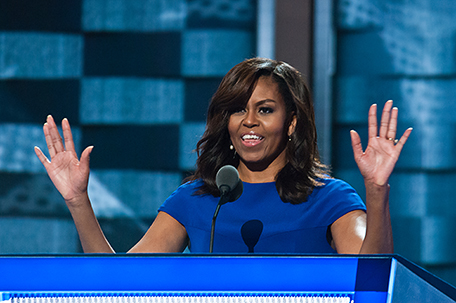 During the first night of the Democratic National Convention, delegates pledged to Vermont Sen. Bernie Sanders shared their displeasure with almost everyone who showed Hillary Clinton their support. But they also knew whom NOT to challenge in that way.

There was a kind of angry electricity in the air as the Democratic National Convention was gaveled into session on Monday at the Wells Fargo Center.

On Sunday, Florida Rep. Debbie Wasserman Schultz stepped down from her post as chair of the Democratic National Committee after Wikileaks published a series of emails that indicated that the DNC may have favored former Secretary of State Hillary Clinton over Vermont Sen. Bernie Sanders in their primary contests.

Because of this, Sanders partisans have been demanding that he rescind the Clinton endorsement and continue the initial plan of twisting superdelegate arms until they agreed to get information behind their candidate.

But Sanders, who was greeted with chants of “Bernie!” as he took the stage, asked the crowd to consider the alternative. “You might not be a big fan of Hillary Clinton’s, and even I don’t agree with her on everything, but she’s on your side whether you realize it or not,” Sanders said.

“The nation needs the best possible person in the Oval Office. And despite what he tells you, Republican Presidential candidate Donald Trump isn’t the right man for the job,” Sanders said.

“This election is about which candidate understands the real problems facing this country and has offered real solutions – not just bombast, fear-mongering, name-calling and divisiveness,” Sanders said in a speech that also allowed him to thank his family, supporters and donors. “By these measures, any objective observer will conclude that – based on her ideas and her leadership – Hillary Clinton must become the next president of the United States.”

For the most part, that request fell on deaf ears. And in some cases, was treated like a betrayal.

When Massachusetts Sen. Elizabeth Warren, a progressive champion who opted to remain neutral throughout the primaries, but endorsed Clinton once her path to the nomination seemed secure, was greeted with chants of “We Trusted You!” by angry Sanders partisans who felt she betrayed them, many of them harboring resentment from his loss in Massachusetts.

But while the Sanders partisans took aim at her, Warren took aim at Trump, a man with whom she’s fought a lot with of late, and the Republicans in Congress, who have done little to help with the problems of Americans trying to find money to send their kids to college, and find good jobs that would allow them to pay their bills.

While taking Trump out is a top priority, so is changing the makeup of Congress, Warren said. Thus, the people who currently make up the Senate and the House need to watch their backs, she said.

There were some attempts at levity during the first night of the DNC. One such attempt came when actress Sarah Silverman and Sen. (and former “Saturday Night Live” cast member) Al Franken came on stage to talk about how they were united in the support for Clinton.

Silverman, a staunch Sanders supporter, gave an endorsement that acknowledged the disappointment she felt that the man she backed didn’t win while also saying that Clinton was a choice she could get behind.

It was met with a combination of derision, and feelings of anger and betrayal from the Bernie or Bust group.

After a few minutes of this, and failed attempts by Franken to calm the situation, Silverman said something that many in the Wells Fargo Center were probably feeling.

“Can I say to the ‘Bernie or Bust’ people, you’re being ridiculous now!” she said.

Because it seemed that the Bernie or Bust crew had it’s boo bird game in full effect, people took to their timelines on Twitter and Facebook to let the world know that they were ready to launch the social media equivalent of a nuclear warhead if they jeered First Lady Michelle Obama when she took the stage.

Fortunately, Black Twitter didn’t have to go in. Only cheers punctuated Obama’s speech, the last she will make as First Lady at a Democratic Convention as she embraced the woman her husband defeated to become the nation’s first Black president.

While elections might be based on policy or other factors, Obama, who referred to herself as the “Mom-in-Chief during most of her tenure as First Lady, believed that the most important thing that she and her husband did was to be the best examples they could be for the nation’s children.

That’s the most important thing that any presidential administration does, and for that reason, her choice is obvious, Obama said.

“Make no mistake about it, this November when we go to the polls, that is what we’re deciding, not Democrat or Republican, not left or right.” Obama said. “This election, and every election, is about who will have the power to shape our children for the next four to eight years of their lives. And I am here tonight because in this election cycle, there’s only one person I trust with that responsibility, only one person who I believe is truly qualified to be president of the United States, and that is our friend Hillary Clinton.”

Obama also neutralized some of the Bernie or Bust anger by acknowledging their disappointment…and reminding them that just because they lost a fight, doesn’t mean that they should stop fighting.

“When she didn’t win the nomination eight years ago, she didn’t get angry or disillusioned,” Obama said. “Hillary did not pack up and go home, because as a true public servant, Hillary knows that this is so much bigger than her own desires and disappointments. What I admire most about Hillary is that she never buckles under pressure. She never takes the easy way out. And Hillary Clinton has never quit on anything in her life.”

Whether or not that tenacity will help her win over disgruntled Sanders supporters is going to play out the rest of this week.

On Tuesday, Clinton will make history by becoming the Democratic Party’s presidential nominee, and will be saluted in a speech by her husband, President Bill Clinton.