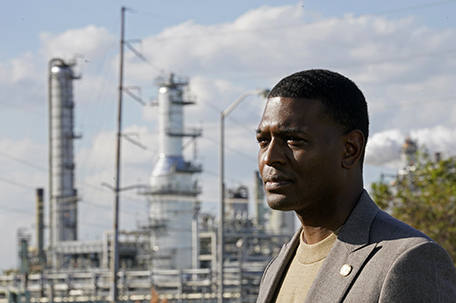 ABOVE PHOTO: EPA Administrator Michael Regan stands near the Marathon Petroleum Refinery as he conducts a television interview, while touring neighborhoods that abut the refinery, in Reserve, La., Tuesday, Nov. 16, 2021. Regan visited St. John and St. James parishes on a tour he called “Journey to Justice.” The five-day trip from Mississippi to Texas in mid-November highlighted low-income, mostly minority communities adversely affected by decades of industrial pollution. (AP Photo/Gerald Herbert)

Stateline, an initiative of The Pew Charitable Trusts

But now they fear that work could be upended by a pair of pending U.S. Supreme Court cases examining affirmative action admissions policies at universities. If the court strikes down affirmative action, many state lawmakers believe, the ruling could open legal challenges to “race-conscious” laws that seek to help marginalized communities.

“State laws are very explicitly self-aware in acknowledging the past explicit racism that underlies the environmental injustice that we continue to see,” said Emily Hammond, an environmental law expert and professor at the George Washington University Law School. “That’s heartening, but it’s worrisome to see those on a crash course with a different policy agenda to make race neutrality the explicit law of the land.”

State lawmakers who have backed such measures say they’re carefully watching the Supreme Court cases, and many Democrats worry they’ll have to revise a whole slew of state laws to help them survive legal challenges. There’s not yet a clear consensus on whether the environmental justice proposals that legislators will consider in their 2023 sessions should be written to exclude race.

“Do I think our environmental justice law hangs in the balance? I do,” said New Jersey state Sen. Troy Singleton, a Democrat. “This could have a seismic impact on how public policy is crafted. I would be naive to tell you I’m not concerned about it.”

Singleton was among the sponsors of a law, passed in 2020, that requires New Jersey state regulators to consider the environmental and public health effects of facilities proposed in overburdened communities. Among the qualifiers for the “overburdened” label are communities with 40% of residents who are racial minorities or tribal members.

Republicans have largely opposed efforts to address environmental issues through the lens of race, with many characterizing systemic racism as a thing of the past.

“It’s just a dangerous trajectory for us to continue to force this conspiracy of racism on all of these decisions,” U.S. Rep. Garret Graves, a Louisiana Republican, said last year during a hearing on a federal environmental justice bill, E&E News reported.

Environmental justice advocates note that communities of color face numerous health disparities and outsized exposure to pollution, because of the racist legacy of practices such as housing segregation and the siting of highways, industrial facilities, and waste dumps. They’ve pushed state lawmakers to address those imbalances with investments in air quality monitoring, permitting safeguards, regulatory changes, and funding to prepare for the effects of climate change.

Many of those policies, which have passed largely in Democratic-led states in recent years, target such efforts at communities with large minority populations or tribal membership, among other factors such as income and health disparities.

“If you look at which communities are getting dumped on, getting the greatest share of pollution impacts, race is the most potent predictor,” said Robert Bullard, a professor at Texas Southern University who has been dubbed the father of the environmental justice movement. “If somehow you don’t take race into account, you are not creating a tool that can get at the heart of the problem.”

The Supreme Court is expected to rule next year on a pair of cases questioning admissions policies at Harvard University and the University of North Carolina. Opponents of the policies argue that race-conscious admissions violate the 14th Amendment’s guarantee of equal protection under the law.

Supporters of affirmative action counter that the 14th Amendment was crafted to secure equality for victims of discrimination, noting that the same Congress that drafted the amendment passed its own race-conscious legislation, including the Civil Rights Act of 1866.

Earlier this year, the Biden administration released its Climate and Economic Justice Screening Tool to steer federal funding to disadvantaged communities. The tool’s 21 indicators notably omit race, Grist reported, a calculation that seeks to protect the effort from legal challenges.

Administration officials argued that the factors it included would still send money to communities of color without explicitly naming them. Grist’s analysis confirmed that, noting that “many of the criteria that the tool uses — proximity to hazardous facilities, linguistic isolation, and proximity to traffic, among others — are effectively functioning as proxies for race.”

A similar approach has been taken in California, which is bound by a 1996 ballot measure that bans affirmative action and considerations of race in public employment and contracting. The state requires that 35% of the revenue raised under its cap-and-trade program for greenhouse gases be reinvested into disadvantaged communities but does not use race in its methodology to identify those communities.

The ballot measure did not explicitly outlaw race considerations in environmental law, said Alvaro Sanchez, vice president of policy at the Greenlining Institute, an inequality-focused nonprofit, but the “shadow” of a potential lawsuit caused its omission. He said the state’s screening tool has largely been able to steer funding to communities of color.

In other states, Democratic lawmakers said they intend to defend the legality of the environmental justice laws they’ve passed. But some also plan to begin working on alternative wording if race-conscious language becomes unviable.

“Proxies may be the only approach, because it’s dead on arrival otherwise,” said Pennsylvania state Rep. Chris Rabb, a Democrat. “It’s infuriating, because there should be no dispute that racism is at the heart of this inequality. When you look at where investment and divestment happens, it’s overwhelmingly along racial lines.”

Pennsylvania Democrats will take a narrow majority in the state House next session, but with Republicans holding the Senate, it will be an uphill battle to pass environmental justice legislation, Rabb said. Still, he pointed to proposals, such as a bill to require environmental impact assessments for facility permits in burdened areas, that may stand to get more consideration in the House.

Washington state lawmakers passed a pair of laws last year that require state agencies to factor environmental justice into their strategic plans and set up an air monitoring network in overburdened communities. The state’s new cap-and-invest program for carbon emissions requires that 35% of revenue be directed to projects in overburdened communities, and 10% of projects must have tribal support.

Democratic state Rep. Debra Lekanoff, a member of the Tlingit tribe and a key backer of the state’s environmental justice efforts, said the Supreme Court cases could threaten a broad swath of state laws, as well as tribal sovereignty.

“It just affects every policy across the state that we’ve developed that targets those who are in critical areas,” she said. “We think it’s scary for the state of Washington. There will be a heavy lift of going through all of these policies and making proxies to ensure that these laws can still move forward, but if this goes a bad way, that is a step we’ll have to work on.”

In Maryland, Del. David Fraser-Hidalgo, a Democrat who serves on the Environment and Transportation Committee, is working on legislation related to air quality monitoring, electric school buses and equitable access to electric vehicles. The pending court decision could affect how those bills are written.

“The last thing you want to do on the state level is pass a bill and have it declared unconstitutional,” he said. “From the drafting perspective, you’re going to have to very closely define economically challenged as opposed to losing X number of years going through the process and then starting all over again.”

Some lawmakers remain hopeful that their policies will hold up.

“I’d like to think that we’re going to be OK, but I can’t really say,” said Maine state Rep. Vicki Doudera, a Democrat and member of the Environment and Natural Resources Committee. Doudera helped pass a bill earlier this year that requires state regulators to incorporate equity considerations into their decisions, and to define “environmental justice populations” with factors that include race and ethnicity.

In North Carolina, state Rep. Pricey Harrison, a Democrat who serves as vice chair on the House Environment Committee, plans to propose legislation that would require state regulators to analyze whether permits related to solid waste, air emissions, water quality and animal waste would have a disproportionate impact on communities of color and low-income communities. While the bill is unlikely to earn support from the Republicans who control the statehouse, Harrison said the bill still will be written with the legal threats in mind.

“If the Supreme Court undermines the ability to take race considerations into account when engaged in government action, that’s a real problem,” she said. “We’ll make sure to put protections in place in case the court does something.”

As states begin their 2023 legislative sessions, policy trackers again expect environmental justice proposals to be a major area of focus. Some legal experts think lawmakers should craft those bills with an eye toward potential court challenges.

“The United States Supreme Court has steadily, over decades, limited government power to define harms in race-conscious ways and remediate them in race-conscious ways,” said Toni Massaro, a constitutional law professor at the University of Arizona. “The legally safest path for states today is to craft laws that redress environmental harms without using race or even tribal status per se.”

But Bullard, the environmental justice icon, called on states to redress environmental racism explicitly until a court rules otherwise. And he expressed hope that states would carry on the work even if a ruling went against them.

“I applaud those states that have stepped up to really capture what’s happening on the ground,” he said. “I’m hoping they will be adaptive and creative and try to get at these problems in some way and not just throw it out the window.”