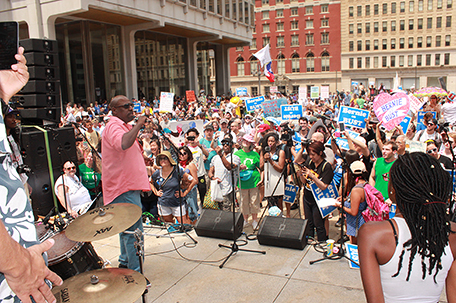 ABOVE PHOTO:  Bernie Sanders protestors hold court in front of the municipal building in CC.  (Photo by Leona Dixon)

A group of Bernie Sanders supporters at this week’s Democratic National Convention is still not ready to make nice with Democratic Presidential nominee Hillary Clinton.

When he delivered a prime-time speech on Monday night that endorsed his former rival for the Democratic presidential nomination, Vermont Sen. Bernie Sanders asked his supporters to help unify the Democratic Party.

But as the end of the Democratic National Convention approaches, Sanders’s more hardcore supporters have been taking to the streets protesting former Secretary of State Hillary Clinton’s being chosen as the party’s presidential nominee.

Hours after Sanders’s speech, protests raged outside of the Wells Fargo Center. On Tuesday night, after the Roll Call of the States certified Clinton’s nomination, a phalanx of Sanders supporters took over a media tent behind the Center, confronting members of the press.

Despite winning several concessions to the DNC platform, basically pushing Clinton far to the left, the most ardent critics of the Democratic nominee, many of them young, progressive African-Americans, believe Clinton won’t follow through with the platform.

They’re also tired of having to settle for the lesser of two evils, they say.

“We have a two-party system and we have two candidates that are absolutely trash. They’re horrible,” said Juanita Jones, 30, who came up from her hometown of Bel Air, Maryland  to take part in the protests. “The lesser of two evils is evil. It doesn’t make a difference.  Of course, there’s discontent, there’s a disconnect.”

Wilson Holts, 34, a member of the group Black Men for Bernie, said Clinton proved that she wasn’t a real progressive by choosing centrist Democrat Tim Kaine as her vice presidential nominee.

“How am I to believe that if she gets into office all of a sudden progressive ideas are going to be important to  her?” said Holts, a native of Los Angeles.  “If (Clinton) chooses Bernie Sanders as her vice presidential candidate, she wins in a landslide, hands down, done over with. He brings not only the rest of the Democratic party, he brings in independents at an overwhelming rate and some Republicans.”

While many African-American politicians, like Maryland Congressman Elijah Cummings, have said a Trump presidency would be detrimental to African-Americans because of his appeal to the racism of white voters, Black Sanders supporters are unwavering in their disdain for Clinton.

“Every time someone defends their view of Hillary Clinton, they always have in Trump’s[corner] in contrast,” said 18-year-old Megan Lewis, who came in from Reno, Nevada  as a member of the activist group Journey for Bernie. “They’re just afraid of Trump and that’s why they want us to vote for Hillary.”

Lewis said the election for Clinton was rigged from the beginning, citing the recent discovery of  emails saying the Democratic National Committee favored Clinton over Sanders during the course of the primaries.

“They’re not counting our votes — they’re not listening to us,” Lewis said. “They decided this election for Hillary Clinton before we the people got a chance to speak. I will not vote for Hillary because it would be supporting a queen.”

The young people interviewed for this story would rather vote for Green Party candidate Jill Stein, who spoke at a rally across the street from City Hall on Tuesday.  They see Stein as the continuation of Sanders progressive policies even if she doesn’t have a chance to win in November’s election.

“[Stein] is Bernie or bust,” Jones said. “Even she’s realizes that she’s picking up the momentum and giving the man a chance. It will never be Hillary because she’s a liar. She’s lied about her emails. Hillary has lied about her stance on African-Americans. She’s been silent on the recent police brutality.She’s not actively seeking to make things better for African-Americans.”

Jake Quinn, a white Sanders superdelegate from North Carolina, who says he’ll be voting for Cleveland, blames the media for the distrust these millennials have of Clinton is due to the constant drumbeat of the conservative media.

“That vast right-wing conspiracy is about as real as real can be, and Hillary Clinton has had to deal with that poison atmosphere her whole life,” Quinn said. “It’s no wonder millennials don’t trust her — they’ve been conditioned not to trust her.”

Elias Kelley, 28, a Black male voter from Dayton, Ohio said his vote for Clinton is because he doesn’t like Trump. He’s leaning toward Stein.

“If I were to vote for Hillary, I would recognize that it’s just a chess move to make sure that the real enemy Donald Trump doesn’t get into office,” Kelley said.

The Bern Comes To Philadelphia