Rough debate performance by moderators a blow to CBS News 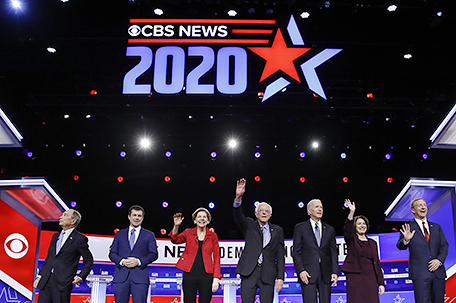 NEW YORK— CBS News faced an ill-timed blow to its reputation on February 25 following a bruising Democratic presidential debate that its moderators struggled to keep from spiraling out of control, although it could take some comfort in the numbers.

The Nielsen company reported that 15.3 million people watched the debate in South Carolina on CBS and BET. While down from the 19.8 million who saw last week’s debate from Nevada on NBC and MSNBC, it revealed that public interest is high.

Gayle King and Norah O’Donnell tried to manage seven presidential candidates fighting for their lives, just a week before the South Carolina and Super Tuesday primaries. Particularly at the start, the journalists looked like substitute teachers in front of an unruly school class.

“This is way worse than any bad day at ‘The View,’” tweeted that show’s Meghan McCain, no stranger to verbal brawls.

CBS News could have used a boost as it navigates new corporate management with Viacom. The network flubbed its handling of a King interview with Lisa Leslie following Kobe Bryant’s death that angered the anchor and made her the subject of threats and criticism, and is facing headwinds trying to establish its evening news in a new Washington base.

Instead, the debating Democrats ran roughshod over rules and it sometimes seemed they were talking and gesturing all at once.

“When you have that much pent-up tension and that much at stake, it makes it nearly impossible to fit tidy answers in a limited amount of time,” said Michael Clemente, who has produced debates for ABC News and Fox News Channel.

Experience counts, and both King and O’Donnell had not done a similar event of this magnitude. CBS, which was televising its first debate of this campaign, also had backstage leadership that had not done a presidential debate.

Having co-moderators, instead of one person in charge, can also make it more difficult to keep control because there are questions about responsibility, Clemente said. At times, the co-moderators were joined by Margaret Brennan, Major Garrett and Bill Whitaker.

“These are good journalists, every one of them,” said Mark Lukasiewicz, who produced debates at NBC News and is now dean of the communication school at Hofstra University. “But being a journalist and being a debate moderator are different functions. And they did not do a good job.”

Initially, the moderators hesitated in steering the conversation, and candidates learned that the loudest and most persistent voice got the floor, he said.

Techniques for taking control that could have been employed, like sharply cutting off a speaker, threatening to turn off their microphones or swiftly moving to a commercial break, weren’t used, the experts said.

The candidates grew frustrated, too. “Can we just speak up when we want to?” former Vice President Joe Biden said at one point. “Is that the rule?”

“Listen to the moderator, guys,” Sen. Bernie Sanders urged at one point.

“It was another slugfest, and I don’t think that necessarily serves the people who were watching,” Sen. Amy Klobuchar said after it was over.

Even experts concede that debate moderating is often a thankless task: like baseball umpires, they are rarely noticed unless something goes wrong. And the line between being too strict or letting a conversation flow is a narrow one.

CBS improved as the night wore on. Brennan effectively cut off combatants trying to interrupt Klobuchar by brusquely saying, “if you could honor the rules of the debate, thank you.”

The debate also grew more substantive, touching on housing, the Middle East and racial equity in education. There was a discussion of coronavirus. Oddly, there was surprisingly little asked about President Donald Trump’s legacy.

Some found the raucousness energizing.

CBS News President Susan Zirinsky, in a note to her staff on Wednesday, said her team should take pride in its performance.

“The Democratic debate last night reflected the intensity of the battle for president,” Zirinksky wrote. “We came together as a team and strived to get to substantive issues, which we did.”

Some viewers were also thrown off by an advertisement for candidate Mike Bloomberg that depicted him at a podium, much like the debate stage. It was confusing because CBS did not give the entire screen over to the commercial, wrapping around debate graphics and a picture of the venue.

“I think it’s a bad idea,” Lukasiewicz said, likening it to a car commercial appearing right after a news report that talked about deficiencies in the vehicle.

CBS said its news division had nothing to do with the placement of the advertisement, and it had been vetted by the network’s standards and practices department.