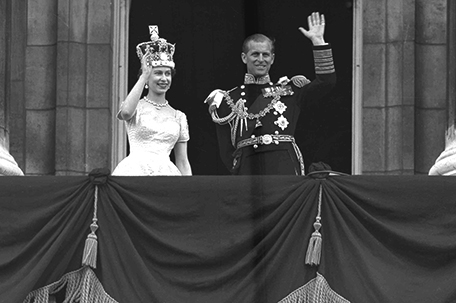 ABOVE PHOTO: In this June 2, 1953 file photo Britain’s Queen Elizabeth II and Prince Philip wave to the crowds from the balcony at Buckingham Palace, following her coronation at Westminster Abbey in London. Prince Philip, the irascible and tough-minded husband of Queen Elizabeth II who spent more than seven decades supporting his wife in a role that both defined and constricted his life, has died, Buckingham Palace said Friday, April 9, 2021. He was 99. (AP Photo/Priest, File)

LONDON (AP) — Queen Elizabeth II, Britain’s longest-reigning monarch and a rock of stability across much of a turbulent century, died Thursday after 70 years on the throne. She was 96.

The palace announced she died at Balmoral Castle, her summer residence in Scotland, where members of the royal family had rushed to her side after her health took a turn for the worse. A link to the almost-vanished generation that fought World War II, she was the only monarch most Britons have ever known.

Her 73-year-old son Prince Charles automatically became king and will be known as King Charles III, his office announced. (British monarchs in the past have selected new names upon taking the throne.) Charles’ second wife, Camilla, will be known as the Queen Consort.

The BBC played the national anthem, “God Save the Queen,” over a portrait of Elizabeth in full regalia as her death was announced, and the flag over Buckingham Palace was lowered to half-staff as the second Elizabethan age came to a close. The impact of her loss will be huge and unpredictable, both for the nation and for the monarchy, an institution she helped stabilize and modernize across decades of enormous social change and family scandals.

In a statement, Charles called his mother’s death “a moment of the greatest sadness for me and all members of my family,” adding: “I know her loss will be deeply felt throughout the country, the Realms and the Commonwealth, and by countless people around the world.”

World leaders extended condolences and paid tribute to the queen. In Canada, where the British monarch is the country’s head of state, Prime Minister Justin Trudeau saluted her “wisdom, compassion and warmth.” In India, once the “jewel in the crown” of the British empire, Prime Minister Narendra Modi tweeted: “She personified dignity and decency in public life. Pained by her demise.”

President Joe Biden called her a “stateswoman of unmatched dignity and constancy who deepened the bedrock alliance between the United Kingdom and the United States.”

Since Feb. 6, 1952, Elizabeth reigned over a Britain that rebuilt from a ruinous and financially exhausting war and lost its empire; joined the European Union and then left it; and made the painful transition into the 21st century.

She endured through 15 prime ministers, from Winston Churchill to Truss, becoming an institution and an icon — a fixed point and a reassuring presence even for those who ignored or loathed the monarchy.

She became less visible in her final years as age and frailty curtailed many public appearances. But she remained firmly in control of the monarchy and at the center of national life as Britain celebrated her Platinum Jubilee with days of parties and pageants in June.

That same month she became the second longest-reigning monarch in history, behind 17th-century French King Louis XIV, who took the throne at age 4. On Tuesday, she presided at a ceremony at Balmoral Castle to accept the resignation of Boris Johnson as prime minister and appoint Truss as his successor. When Elizabeth was 21, almost five years before she became queen, she promised the people of Britain and the Commonwealth that “my whole life, whether it be long or short, shall be devoted to your service.”

It was a promise she kept across more than seven decades.

Despite Britain’s complex and often fraught ties with its former colonies, Elizabeth was widely respected and remained head of state of more than a dozen countries, from Canada to Tuvalu. She headed the 54-nation Commonwealth, built around Britain and its former colonies.

Married for more than 73 years to Prince Philip, who died in 2021 at age 99, Elizabeth was matriarch to a royal family whose troubles were a subject of global fascination — amplified by fictionalized accounts such as the TV series “The Crown.” She is survived by four children, eight grandchildren and 12 great-grandchildren.

Through countless public events, she probably met more people than anyone in history. Her image, which adorned stamps, coins and banknotes, was among the most reproduced in the world. But her inner life and opinions remained mostly an enigma. Of her personality, the public saw relatively little. A horse owner, she rarely seemed happier than during the Royal Ascot racing week. She never tired of the companionship of her beloved Welsh corgi dogs.

Elizabeth Alexandra Mary Windsor was born in London on April 21, 1926, the first child of the Duke and Duchess of York. She was not born to be queen — her father’s elder brother, Prince Edward, was destined for the crown, to be followed by any children he had.

But in 1936, when she was 10, Edward VIII abdicated to marry twice-divorced American Wallis Simpson, and Elizabeth’s father became King George VI.

Princess Margaret recalled asking her sister whether this meant that Elizabeth would one day be queen. ”’Yes, I suppose it does,‘” Margaret quoted Elizabeth as saying. “She didn’t mention it again.”

At Westminster Abbey in November 1947 she married Royal Navy officer Philip Mountbatten, a prince of Greece and Denmark whom she had first met in 1939 when she was 13 and he 18. Postwar Britain was experiencing austerity and rationing, and so street decorations were limited and no public holiday was declared. But the bride was allowed 100 extra ration coupons for her trousseau.

In February 1952, George VI died in his sleep at age 56 after years of ill health. Elizabeth, on a visit to Kenya, was told that she was now queen.

Her private secretary, Martin Charteris, later recalled finding the new monarch at her desk, “sitting erect, no tears, color up a little, fully accepting her destiny.”

“In a way, I didn’t have an apprenticeship,” Elizabeth reflected in a BBC documentary in 1992 that opened a rare view into her emotions. “My father died much too young, and so it was all a very sudden kind of taking on, and making the best job you can.”

Her coronation took place more than a year later, a grand spectacle at Westminster Abbey viewed by millions through the still-new medium of television.

The loss of Philip in 2021 was a heavy blow, as she poignantly sat alone at his funeral in the chapel at Windsor Castle because of coronavirus restrictions.

And the family troubles continued. Her son Prince Andrew was entangled in the sordid tale of sex offender businessman Jeffrey Epstein, an American businessman who had been a friend. Andrew denied accusations that he had sex with one of the women who said she was trafficked by Epstein.

The queen’s grandson Prince Harry walked away from Britain and his royal duties after marrying American actress Meghan Markle in 2018. He alleged in an interview that some in the family -– but pointedly not the queen -– had been less than welcoming to his wife.

She enjoyed robust health well into her 90s, although she used a cane in an appearance after Philip’s death. Months ago, she told guests at a reception “as you can see, I can’t move.” The palace, tight-lipped about details, said the queen was experiencing “episodic mobility issues.”

She held virtual meetings with diplomats and politicians from Windsor Castle, but public appearances grew rarer.

Meanwhile, she took steps to prepare for the transition to come. In February, the queen announced that she wanted Camilla to be known as “Queen Consort” when “in the fullness of time” her son became king. It removed a question mark over the role of the woman some blamed for the breakup of Charles’ marriage to Princess Diana in the 1990s.

May brought another symbolic moment, when she asked Charles to stand in for her and read the Queen’s Speech at the State Opening of Parliament, one of the monarch’s most central constitutional duties.

Prince Philip shaped, and was shaped by, a century of tumult