Police killings, other racial injustice cases pending in US 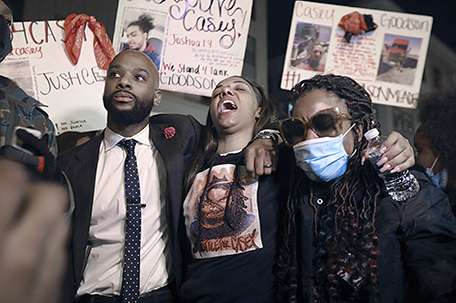 ABOVE PHOTO: Tamala Payne, center, with attorney Sean Walton, participates in a protest march against the shooting of her son, Casey Goodson Jr. in Columbus, Ohio. The final coroner’s report released Thursday, March 18, 2021, indicated Goodson was shot five times in the back by a white Ohio sheriff’s deputy last December. Relatives of the victim have said he was shot while opening the door at his grandmother’s house. (Doral Chenoweth/The Columbus Dispatch via AP, File)

Even as that case grinds forward, many other cases are being closely watched as the U.S. grapples with the racial injustice exposed anew by Floyd’s death. Most involve killings by police, although some — like Ahmaud Arbery’s death in Georgia — are being scrutinized for other reasons.

Here’s a rundown of some of the most high-profile cases:

Arbery, a 25-year-old Black man, was chased and fatally shot by three white men who spotted him running in their Georgia neighborhood on Feb. 23, 2020. Glynn County police were widely criticized for making no arrests. Charges didn’t come until the state took over the case more than two months later. Jury selection for the three men, charged with malice murder and other counts, is scheduled in October, and federal authorities have charged the men with hate crimes.

Brown, 42, who was Black, was fatally shot in April by sheriff’s deputies in Elizabeth City, North Carolina. They were serving drug-related warrants at Brown’s home when they surrounded Brown’s car; he backed up and moved forward before several shots were fired at and into his vehicle. Attorneys for Brown’s family say he was trying to get away, while authorities have said he was using his car as a weapon. The deputies were cleared by a prosecutor who agreed with authorities. An FBI probe is ongoing.

Bryant, 16, who was Black, was shot four times in April by a white Columbus, Ohio, police officer as she swung a knife at a young woman. Police were responding to a 911 call from Bryant’s foster home about a group of girls threatening to stab members of the household. Bryant’s family has said the teen and her younger sister were the ones who called for help. The city’s mayor invited the Justice Department soon afterward to review the police department for any possible racial disparities.

Wright, 20, who was Black, was shot during a traffic stop in April in a Minneapolis suburb in the midst of the Chauvin trial. A white police officer, 26-year veteran Kim Potter, is charged with manslaughter. Body camera video shows Wright attempting to pull away from officers, and Potter shouting “Taser! Taser! Taser!” just before shooting Wright. The city’s police chief said he believed Potter mixed up her Taser with her handgun; both he and Potter resigned two days after the shooting. Wright’s family and activists have rejected the Taser explanation and called for more serious charges.

Toledo, a 13-year-old who was Latino, was fatally shot in March by a white police officer in Chicago. Body camera video shows the teen appearing to drop a handgun less than a second before the officer fired his gun. A civilian police accountability board hasn’t yet made a recommendation on whether the officer should be charged.

Alvarez, a 22-year-old Latino man, died March 31 after being shot by a Chicago police officer during a foot chase. Police said Alvarez brandished a gun while being chased. Body camera video showed Alvarez had his back turned and appeared to be holding a gun when Officer Evan Solano fatally shot him. The city’s independent police review board recommended that the officer be stripped of his police powers until an investigation concludes.

Greene, a 49-year-old Black man, died in 2019 in Louisiana in the custody of state troopers, but his case drew new attention in May after The Associated Press obtained and published body camera video of his arrest that appeared to contradict at least one trooper’s statement. The trooper said Greene was a threat even after restrained and that his behavior was the reason troopers used force. The video shows troopers stunning, beating and choking Greene after a car chase. He also was placed face down on the ground for more than nine minutes while restrained. Activists have called for the troopers to be fired and charged with crimes.

Scott, a 26-year-old Black man, died in March while struggling with detention officers at a Texas jail. Scott was arrested at a mall on a charge of marijuana possession, then taken to a hospital because he was reportedly acting erratically. After he was released, he was taken to the Collin County jail, where he exhibited what the sheriff called “some strange behavior.” Jailers put him on a restraint bed, used pepper spray and covered his face with a spit mask. He eventually became unresponsive and died of what the medical examiner’s office called “fatal acute stress response” during restraint struggle with law enforcement. Seven jailers were fired and one resigned. Scott’s family called for their arrest. A grand jury in June declined to indict the jailers but called for a work group to study Scott’s death.

Myeni, a 29-year-old Black man, was fatally shot by Honolulu police in April after they responded to a 911 call. Tourists staying at a home called police after a stranger — Myeni — walked into the home and acted oddly, according to their attorney. Police said Myeni violently attacked responding officers, leaving one with a concussion, and released clips of body camera video showing him ignoring commands to get on the ground and being unaffected by a stun gun. Myeni’s widow has filed a wrongful death lawsuit saying he likely mistook the home for a temple next door.

Winston Boogie Smith Jr., a 32-year-old Black man, was fatally shot in a Minneapolis parking ramp by members of a U.S. Marshals Service task force. Authorities said they were trying to arrest Smith on a weapons violation and that he showed a handgun. The state investigative agency said evidence shows Smith fired the gun. A woman with Smith said through attorneys that she never saw a gun on Smith or in his vehicle. The two sheriff’s deputies who shot Smith weren’t wearing body cameras, saying the Marshals Service told them they could not. The lack of video in the city where George Floyd died contributed to anger over Smith’s death, sparking several days of protests.

Prude, a 41-year-old Black man, died in Rochester, New York, in March 2020, several days after encountering police after he was released from a hospital following a mental health arrest. He ran naked from his brother’s home and was seen breaking store windows; his brother Joe testified that he warned an officer who came to his home not to kill his brother. His death drew new attention six months later when his family released body camera video obtained through a public records request that showed Prude handcuffed and naked with a spit hood over his head as one officer pushed his face against the ground, and another pressed a knee to his back. The officers held Prude down for about two minutes until he stopped breathing. A grand jury declined to indict any officers in February. An internal investigation may still result in disciplinary charges.

Hill, a 47-year-old Black man, was visiting a family friend when he was fatally shot by a white police officer in Columbus, Ohio, in December as he emerged from a garage holding a cell phone. Officer Adam Coy was fired and has pleaded not guilty to murder and reckless homicide charges. The police chief was forced out and the city agreed to pay a $10 million settlement to Hill’s family.

Goodson, a 23-year-old Black man, was shot in the back five times by a white sheriff’s deputy in Columbus, Ohio, on Dec. 4. The deputy, Jason Meade, was working for a U.S. Marshals Office task force and just finishing a search for a fugitive when he shot Goodson, who was not the subject of the search. U.S. Marshal Peter Tobin first said Goodson drove past the deputy and waved a gun, then withdrew the comments as based on “insufficient information.” Relatives said Goodson was opening the door to his grandmother’s house when he was shot. Two special prosecutors were appointed in June to examine the case.

Brooks, a 27-year-old Black man, fell asleep in his car in the drive-thru lane of a Wendy’s restaurant in Atlanta in June 2020. Police body camera video showed him struggling with two white officers who told him he’d had too much to drink to drive and tried to arrest him. Brooks grabbed a Taser from one of the officers and fled, firing it at Officer Garrett Rolfe as he ran. Rolfe fired his gun, hitting Brooks twice in the back. Rolfe is charged with murder and was fired after the shooting, though that dismissal was reversed on the grounds the city hadn’t followed its procedures.

Ellis, a 33-year-old Black man, died March 3, 2020 after he pleaded for breath under an officer’s knee in Tacoma, Washington. Ellis was Tasered, handcuffed and hogtied, with his face covered by a spit hood.

A medical examiner said he died from lack of oxygen caused by restraint, with an enlarged heart and methamphetamine intoxication as contributing factors. Tacoma police officers Christopher Burbank and Matthew Collins are charged with second-degree murder after witnesses reported they started beating Ellis without provocation.

The officers say he attacked them. A third officer, Timothy Rankine, is charged with first-degree manslaughter for allegedly kneeling on Ellis’ back and shoulder as he repeatedly said he couldn’t breathe.

“Stakes Is High”– Police killings of unarmed blacks is a national travesty!