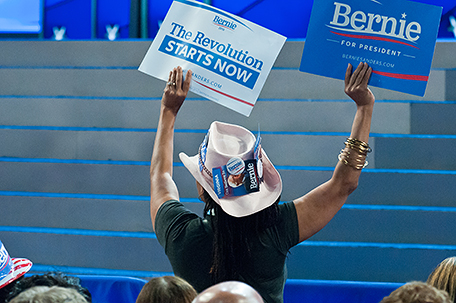 A group of angry supporters of Bernie Sanders decided to make their grievances known by taking over one of the Democratic National Convention’s media tents Tuesday night.

The second night of the Democratic National Convention in Philadelphia was supposed to be memorable for a variety of reasons.

But a group of disgruntled Bernie Sanders supporters made sure that anything else going on at the DNC was going to take a back seat by taking over a news tent behind the Wells Fargo Center.

The occupation of the edifice came after Sanders cast the deciding vote that made Hillary Clinton the first woman to lead a major party’s presidential ticket.

The Sanders supporters burst into the news tent, demanding their voices be heard, something that the assembled media and many outside the tent were more than happy to do. Reporters with cameras, microphones and note pads surrounded the group, some of whom had tape or Sanders bumper stickers over their mouths.

Forcing the media to hear their voices was one of the group’s goals, said Rusty Pearce, a Sanders delegate from Las Cruses, New Mexico. While television coverage of Sanders’ presidential run was quite substantial, Pearce felt that the media gave him short shrift.

“We don’t feel like we get enough coverage from the media,” he said. “We want more news coverage from the corporate media. They declared Hillary the winner before we got here. She may have had the right number of delegates, but we felt it was a rigged system.”

Moving forward with the political revolution Sanders started what was also another goal, Pearce said. They hope to have more progressive candidates on the ballot, body cameras for police, and other things that the former presidential candidate advocated for, he said.

When asked about how this revolution might impact those who don’t have the luxury of sharing his vision by making Donald Trump the nation’s next president, Pearce said that wasn’t his problem.

“I’d tell them that I tried my very best to make Bernie Sanders the nominee,” he said. “His stances are mine. It’s not my fault if Hillary Clinton loses. It’s her fault and the fault of the people that voted for her. Bernie has endorsed her, but it’s not about the man, it’s about the revolution.”

The revolution, at least for this presidential cycle, came to an end at around 7:30 Tuesday night when Sanders asked that Clinton be approved as the party’s nominee by acclamation.

If elected, Clinton would become the nation’s first female president, allowing Democrats to make history for a second time and obliterating the “glass ceiling” she talked about during her run for president in 2008.

Sanders was scheduled to speak at Pennsylvania’s Delegation Breakfast on Wednesday, but was a no-show. While disappointed that the Senator from Vermont didn’t come in first place, State Rep. Mark Cohen — one of Sanders staunchest supporters — felt that his presence on the ticket through the primaries made the party take some stances it might not have without his presence.

“He may not have been a success in all areas, but he was a success on some measures,” Cohen said. “He made a positive effort.”

While the post-Roll Call of the States “revolution” caused things to veer off course, there were a lot of other things that happened on Tuesday night.

A sisterhood formed by the murders of Black children took to the stage to endorse Clinton’s presidency. Sybrina Fulton, mother of Trayvon Martin; Geneva Reed-Veal, the mother of Sandra Bland; Lucia McBath, mother of Jordan Davis; Maria Hamilton, mother of Dontre Hamilton; Gwen Carr, the mother of Eric Garner, and Lesley McSpadden, mother of Michael Brown – the “ Mothers of the Movement” — shared impassioned memories of their children and about how Clinton came and talked to them.

“I’m here with Hillary Clinton because she is a leader, and a mother who will say our children’s names,” Reed-Veal said. “Hillary knows that when a young Black life is cut short, it’s not just a national loss, it’s a personal loss. It’s a loss that diminishes all of us.”

But if Black lives cut short by gun violence really matter, it shouldn’t be just the ones lost through encounters with police, said Dorothy Johnson-Speight, head of Mothers in Charge. Both Mothers In Charge and former Congresswoman Gabrielle Giffords held a press conference to announce a new initiative against gun violence on Tuesday at the Pennsylvania Convention Center.

“Nobody is marching for those kids,” she said. “If all Black Lives Matter, it doesn’t make sense. My son was a 24-year-old college graduate that was killed over a parking spot. Wayne Walker-Lipscomb’s son, Moses was a 15-year veteran police officer killed walking home from work. A little girl gets killed while she’s on her front stoop having her hair braided. Where’s the outrage then?”

She and the members of Mothers in Charge’s chapters around the country are hoping to speak with Clinton about this topic.

“She’s a mother and a grandmother,” said Mattie Scott, a member of Mothers In Charge-San Francisco.

The night ended with a speech from a man whose name usually leads the credits at events like this: former President Bill Clinton. President Clinton shared the story of his courtship with his wife, and how her example made him better.

“Hillary opened my mind to a whole new world of public service by private citizens,” he said. “In our last year in law school, Hillary kept up this work. She went to South Carolina to find out why so many African American boys were being jailed for years with adults. She filed a report and that caused some changes too. She’s always making things better.”

On Wednesday, President Barack Obama and Vice President Joe Biden are scheduled to deliver their last addresses as president and vice president to the Democratic National Convention.