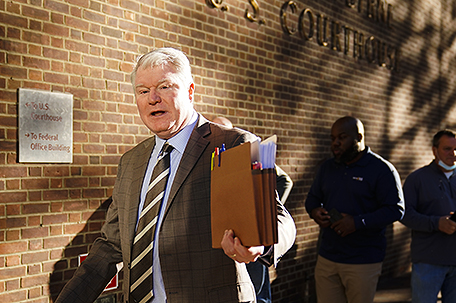 PHILADELPHIA — A powerful Philadelphia labor leader and a city council member were found guilty of conspiracy charges Monday in a corruption trial.

Their convictions follow a lengthy FBI investigation of activities within the chapter of the International Brotherhood of Electrical Workers that Dougherty leads, but will not mark the end of Dougherty’s legal woes.

Jurors deliberated for several days last week before announcing a verdict Monday afternoon. The defendants’ sentencing was scheduled for February.

Dougherty, speaking briefly with reporters as he left the courthouse, didn’t comment directly on the verdict.

Henon didn’t offer any comment as he left; messages were left with attorneys for both defendants.

Federal prosecutors argued that Dougherty kept Henon on the payroll in a $70,000-a-year, no-show job.

“All Henon had to do to keep those benefits flowing to him (was) to use his official duties to please John Dougherty,” Assistant U.S. Attorney Bea Witzleben said, according to The Philadelphia Inquirer.

Defense lawyers insisted that there had been no undue influence and argued that the city allows council members to hold outside jobs. The defense also questioned how it was a crime for union supporter Henon to side with Dougherty and the building trades workers he was elected to represent.

“If you know that the person you’re supposedly bribing is already going to do what you want, then there is no bribe,” Dougherty attorney Henry Hockeimer Jr. said in his closing argument last week.

Dougherty, a major force in Pennsylvania politics, has steered more than $30 million over the years to mostly Democratic candidates, and his brother sits on the Pennsylvania Supreme Court.

Prosecutors over four weeks of testimony tried to show that Dougherty used Henon to press Comcast Corp. to steer $2 million worth of electrical work to a friend during cable contract talks with the city; to shut down the non-union installation of MRI machines at Children’s Hospital of Philadelphia and to investigate a towing company that seized Dougherty’s car.

Hockeimer called Dougherty an older-brother figure to Henon and defended his client’s “bombastic” style. He scoffed at allegations that the salary and Philadelphia Eagles tickets he passed on to Henon amounted to bribes.

Dougherty still faces a second trial on charges he and others embezzled more than $600,000 from Local 98 of the International Brotherhood of Electrical Workers.