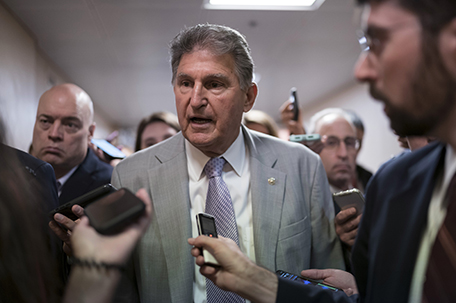 ABOVE PHOTO: Sen. Joe Manchin, D-W.Va., a key negotiator in the infrastructure talks, speaks to reporters as senators arrive for votes at the Capitol in Washington, Tuesday, July 13, 2021. Yesterday, Sen. Bernie Sanders, I-Vt., chair of the Senate Budget Committee, met at the White House with President Joe Biden to address roadblocks on on an infrastructure agreement. (AP Photo/J. Scott Applewhite)

WASHINGTON — The Senate has voted to take up a nearly $1 trillion national infrastructure plan after President Joe Biden and a bipartisan group of senators reached agreement on major provisions of the package.

The White House is projecting that the investments will add, on average, about 2 million jobs per year over the coming decade.

A 57-page Republican summary of the agreement obtained by The Associated Press also outlines how the lawmakers hope to pay for the additional spending.

Here’s a breakdown of where the dollars would go, according to a summary released by the White House on Wednesday.

— $110 billion for roads and bridges. The $40 billion for bridges is the single largest dedicated bridge investment since the construction of the Interstate highway system

— $39 billion for public transit. The money would be used to modernize bus and subway fleets and bring new service to communities. That’s about $10 billion less than senators negotiating the agreement had originally designated.

— $66 billion for passenger and freight rail. The money would be used to reduce Amtrak’s maintenance backlog, improve Amtrak’s 457-mile-long Northeast Corridor as well as other routes and make safety improvements to rail grade crossings.

— $5 billion for the purchase of electric school buses and hybrids, reducing reliance on school buses that run on diesel fuel.

— $17 billion for ports and $25 billion for airports to reduce congestion and address maintenance backlogs.

— $55 billion for water and wastewater infrastructure, including funding to replace all of the nation’s service lines using lead pipe.

— $65 billion to expand broadband access, a particular problem for rural areas and tribal communities. Most of the money would be made available through grants to states.

— $73 billion for modernizing the nation’s electric grid and expanding the use of renewable energy.

And here’s a breakdown of pay-fors in a Republican summary of the plan:

— Tapping about $205 billion in unspent COVID-19 relief aid. Congress has provided about $4.7 trillion in emergency assistance in response to the pandemic.

The trade association for drug manufacturers argued that the rule would help reduce patients’ out-of-pocket costs, but the Congressional Budget Office had projected that it would increase taxpayer costs by $177 billion over 10 years.

— Raising an estimated $87 billion in spectrum auctions for 5G services.

— Restarting a tax on chemical manufacturers that had expired in 1995, raising about $13 billion.

The money had been used to help fund the cleanup of Superfund sites. Also, selling oil from the Strategic Petroleum Reserve would add about $6 billion.

— Strengthening tax enforcement when it comes to crypto currencies, raising about $28 billion.

— Relying on projected economic growth from the investments to bring in about $56 billion.