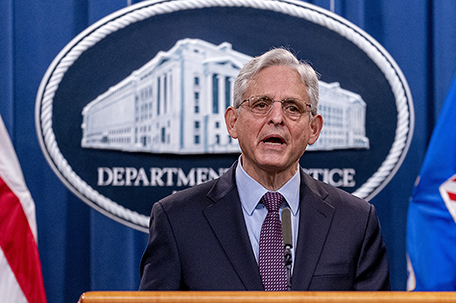 ABOVE PHOTO: Attorney General Merrick Garland speaks at a news conference at the Justice Department in Washington, on Nov. 8, 2021. The Department of Justice has sued Texas over new redistricting maps, saying the plans discriminate against voters in the state’s booming Latino and Black populations. The maps passed by Texas’ Republican-dominated Legislature favor incumbents and decrease political representation for growing minority communities that have driven growth in the nation’s largest red state. (AP Photo/Andrew Harnik, File)

By Acacia Coronado And Nicholas Riccardi

AUSTIN, Texas  — The Justice Department sued Texas on Monday over its new redistricting maps, saying the plans discriminate against minority voters, particularly Latinos, who have fueled the state’s population boom.

The lawsuit claims the Republican-controlled state violated part of the Voting Rights Act in drawing new district boundaries for its congressional delegation and state legislature. It’s the Biden Justice Department’s first legal action challenging a state’s maps since states began redrawing their maps this year to account for population changes.

The lawsuit notes that most of Texas’ population growth over the past decade came from Black, Latino and Asian people, but alleges that the new maps scatter these voters across districts, diluting their votes and denying them opportunities to choose their representatives. It also argues the maps pack Black and Latino communities into bizarre-shaped districts — a Dallas-area one is described as “seahorse” shaped — while preserving seats for white Republicans.

“This is not the first time that Texas has acted to minimize the voting rights of its minority citizens,” Associate Attorney General Vanita Gupta said during a news conference with Attorney General Merrick Garland. “Decade after decade, courts have found that Texas has enacted redistricting plans that deliberately dilute the voting strength of Latino and Black voters and that violate the Voting Rights Act.”

The litigation comes as Republicans and Democrats jockey for an edge in the once-a-decade redistricting process, which has already reached new levels of gerrymandering. The lawsuit also plays out during a changed legal landscape for redistricting challenges. The U.S. Supreme Court ruled in 2019 that it won’t referee partisan gerrymandering disputes — maps drawn to benefit a political party.

A spokeswoman for Texas Gov. Greg Abbott, a Republican, condemned the lawsuit.

“It’s no surprise that Democrats in Washington are attacking our state’s redistricting plans,” Renae Eze said. “We are confident that Texas’ redistricting plans will be upheld by the courts, and our office continues working with the Office of the Attorney General to ensure Texans are represented fairly.”

In west Texas’ competitive 23rd District, the map trimmed out areas near El Paso and San Antonio to lower the share of Latino voting-age residents by 9%. In the Dallas area, it pulled Black and Latino residents in the northwest suburbs out of the district of Republican Rep. Beth Van Duyne, who narrowly defeated Candace Valenzuela, a Democratic Black Latina candidate last year. In the Houston area, where the share of the white population is dwindling, the map kept six of 10 House districts as white-majority or plurality districts.

Texas has had to defend its maps in court after every redistricting process since the Voting Rights Act took effect in 1965. But this will be the first time since a 2013 U.S. Supreme Court ruling gutted a provision of the Voting Rights Act that had required Texas and other states with a history of racial discrimination to have the Justice Department approve the maps before they went into effect.

The case is the second civil rights lawsuit the Biden administration has filed against Texas recently. Last month, it sued to overturn the state’s new voting law, part of a wave of GOP-backed voting changes, claiming the new restrictions would disenfranchise citizens in the state.

The lawsuit, and others that civil rights groups and Democrats have previously filed challenging Texas’ maps, may not change things before next year’s election. Redistricting litigation can take several years and the Biden administration case will be heard in the 5th Circuit Court of Appeals, one of the most conservative in the country.

It remains illegal for mapmakers to discriminate on the basis of race while drawing legislative lines. Additionally, Section 2 of the Voting Rights Act prohibits line-drawers from diluting the voting power of minorities by scattering them among districts and preventing them from choosing their preferred candidates.

“The Legislature refused to recognize the state’s growing minority electorate,” the lawsuit alleges. “Although the Texas congressional delegation expanded from 36 to 38 seats, Texas designed the two new seats to have Anglo voting majorities.”

The lawsuit notes that Texas’ congressional map was drawn with heavy input from its Republican congressional delegation, which is all white except for one Latino representative. Statehouse Democrats at the time objected strongly to the process and the results.

Although the federal lawsuit alleges Black voters are also treated improperly by the map, the bulk of the case centers around the map’s treatment of Latinos.

The focus on Latinos could complicate the case. To prove that Latinos were denied their choice, the government has to prove that they vote as a bloc, and not in line with the majority of the voters in the district. While most Latinos in Texas vote Democratic, many have shifted to Republicans recently, with President Donald Trump gaining ground in 2020.

“That does complicate the narrative,” said Josh Blackman, a law professor at the South Texas College of Law in Houston, noting that the Voting Rights Act claim depends on the group voting as a bloc.

Michael Li, senior counsel at the Brennan Center for Justice in New York, said the legal analysis should consider Latino voting patterns over several elections, not just in 2020. He said he expects Republicans to argue they are only being partisan, now that the Supreme Court has appeared to greenlight that behavior in redistricting.

“Texas drew a really aggressive map this decade,” Li said. “One of the most aggressive maps we have seen so far this cycle and one that heavily targets communities of color.”

Former Rep. Beto O’Rourke, a Democrat who is challenging Gov. Abbott next year, tweeted, “Texas leaders would rather gerrymander election maps and hand pick their own voters than earn their place in power by listening and responding to the needs of Texans.”