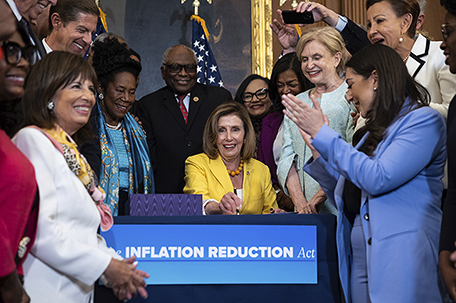 Now that the Inflation Reduction Act has been passed and signed into law, what does it mean for Philadelphians in general, and the Black community in particular?

ABOVE PHOTO: House Speaker Nancy Pelosi (D-Calif.), surrounded by other House Democrats, signs the Inflation Reduction Act after it passed the House 220-207 at the U.S. Capitol Aug. 12, 2022. (Francis Chung/E&E News/POLITICO via AP Images)

When President Joe Biden signed the Inflation Reduction Act into law on Tuesday, it was hailed by many as a historic achievement for those concerned about climate change, drug prices and the deficit.

The $750 billion package allows Medicare to negotiate prices for certain prescription drugs, extends health care subsidies, and provides tax credits to businesses investing in clean energy. To pay for the package, a 15% minimum tax for businesses that make more than $1 billion in profit and a 1% tax on stock buybacks will be implemented.

And before these businesses start looking for a way to get around those taxes, the IRA also includes provisions that beef up the Internal Revenue Service’s ability to collect them.

Prior to voting for the bill’s passage on Friday, three Philadelphia area Congressmembers — Dwight Evans ( D-3rd Dist.), Brendan Boyle (D-2nd Dist.) and Mary Gay Scanlon (D-5th Dist.) — spoke with reporters about what this law would mean for Philadelphians.

For many of the region’s senior citizens, medications were so expensive that they had to choose between getting said medications and paying the bills. Seniors in his Northeast Philadelphia district have been hit with medication bills as high as $10,000, Boyle said.

One of the few things that both Democrats and Republicans in Congress have been able to agree on over the years has been that the price of prescription drugs is far too high. This law begins to solve this problem, Boyle said.

“This bill immediately helps them by instituting for the first time ever a cap of $2,000 a year,” he said. “That’s transformative.”

Another thing that the law does is provide money to try and correct some of the problems caused by the ravages of climate change, Gay Scanlon said. Both Chadds Ford’s Brandywine Museum and Conservancy and the Southwest Philadelphia neighborhood of Eastwick were brutalized by Hurricane Ida a little less than a year ago and are still trying to recover from the massive flooding that storm brought, she said.

IRA stands to provide some much needed relief to these parts of her district, Gay Scanlon said.

“From one end of my district to the other and all across the country, we can see the devastating impact of climate change every single day,” Gay Scanlon said. “Congress has to deliver results, and we’re going to do it with this bill. The Inflation Reduction Act is going to reduce CO2 emissions by 40% by 2030. This legislation is going to lead to investment in our energy sector to spur innovation and support renewable energy. And it’s going to do this while supporting workers and creating more than 9 million new jobs over the next decade. It’s also going to ensure that vulnerable communities like the Eastwick neighborhood that feel the impact of the climate crisis will get the tools and attention that they deserve.”

The $60 billion in environmental justice funding provided as part of the IRA will also go a long way to repairing some injustice inflicted upon Philadelphia when interstate highways split Chinatown down the middle and cut Penn’s Landing off from the Old City. The law includes money to put caps on I-676 and I-95 that create walkways over those two roads.

It gives the federal government the chance to correct a mistake it made a long time ago, Boyle said.

“[The highway splits] were forced upon Philadelphia, by the way, in, I believe, the 1950s,” he said. “If you ever wonder who had the idea from Philadelphia to cut off our waterfront from the rest of the city, no one in Philadelphia had it. That idea was forced by the federal government upon the residents of Philadelphia. That’s an inequity that we’re attempting to address.”

While the final amount headed to Southeastern Pennsylvania from the bill hasn’t been finalized yet, the commitment to putting the dollars to work for the area is, Evans said.

“The three of us, along with our senator, Senator [Bob] Casey are all working together,” he said. “The three of us are working very closely to try to make these things happen for the Southeast, as well as for the City of Philadelphia.”

Evans cosponsors relief bill for restaurants and other hard-hit businesses