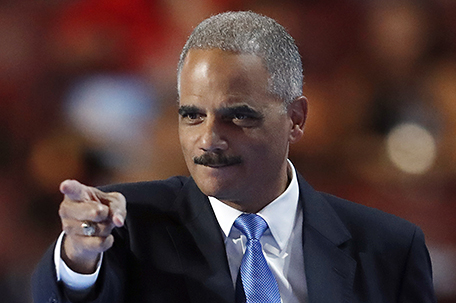 At the Wednesday meeting of the Democratic Party’s Black Caucus, former U.S. Attorney General Eric Holder talked police reform, Hillary Clinton, and how the only thing that matters as much as “Black Lives” are “Black Votes.”

When Former U.S. Attorney General Eric Holder came to speak to the members of the Democratic Party’s Black Caucus as part of last Wednesday’s Democratic National Convention activities, he pulled no punches.

There’s a lot at stake for the Black community in this election, and making sure your electoral voice is heard is going to be important.

In a rousing 19-minute speech in front of 300 people at the Philadelphia Convention Center, Holder urged African-Americans to cast their votes for Democratic Presidential nominee Hillary Rodham Clinton, and to support the Black Lives Matter movement in it’s efforts to stop police brutality.

“There are huge things at stake here and a protest vote for somebody other than Hillary Clinton is a vote for [Republican Presidential nominee] Donald Trump,” Holder said in a speech that brought the crowd to it’s feet several times. “[Black Lives Matter] is in the best tradition of the Civil Rights movement. They’re trying to move this country to a place where it ought to be, and so you all defend Black Lives Matter and you defend the use of that term.”

Holder reflected on his time working with the Justice Department and also talked about what he feels is unfinished business in areas such as gun safety, restoring the Voting Rights Act, and repairing the relationship between African-Americans and the police.

“In spite of the fact that people 90 percent of the people wanted gun safety regulations put in place, but the gun lobby convinced people in Congress not to vote that way. It’s time for us to say, we’ve had enough,” Holder said.  “We’ve simply had enough and we demand that reasonably gun legislation be put in place.”

Holder said too many Americans, especially the African American community have felt the harsh impact of gun violence and it is time to introduce legislation to regulate the access to guns.

“The fact that too many people have access to guns they should not have had access to,” He said. “You think about the carnage that has happened in the nation in general, and the African American community in particular– that for me is a defining issue.”

Holder was also critical of the Supreme Court decision in Shelby vs. Alabama, calling it the worst decision in the history of the court. The decision in Shelby gutted an important provision of the Voting Rights Act of 1965, and said that Congress exceeded its power in enforcing the Constitution’s 14th and 15th Amendments.

“Five members of the Supreme Court, including Clarence Thomas, took it upon themselves to say the Voting Rights act as constituted was unconstitutional and that to has to change,” Holder said.

Holder said it’s important for African-Americans to vote for Clinton because a Supreme Court with Trump as president would be disastrous.

“The guy who ran ‘The Apprentice’ is going to pick people for the Supreme Court,” he said as the crowd roared with laughter.

In addition to his criticism of Trump, Holder took some shots at the Republican-controlled Congress for not confirming Merrick Garland to the Supreme Court after the death of Antonin Scalia. He said that is it was all he more reason that African-Americans should cast their vote for Clinton.

“We have a very qualified guy in Merrick Garland … who, if the Senate would do their damned jobs would be on the Supreme Court right now,” Holder said. “The delay that he’s had to endure is unprecedented and the notion that a President with one year to go in his term can’t pick a Supreme Court justice, tells you all you need to know about the Republican Party.”

Finally, Holder ended his speech by praising the Black Lives Matter movement and the role they have played in educating the public on the issue of police brutality.

“For too long in our history, Black lives didn’t matter, and now we’re saying in 2016 that Black lives do matter,” he said to a standing ovation.