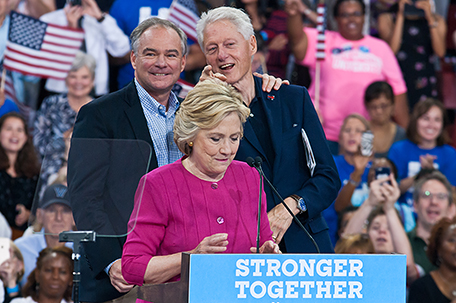 Eight years ago, Barack Obama began his historic Presidential campaign. On Friday, another history-making Democratic Presidential candidate, Hillary Clinton, began her quest for the White House on a bus from Philadelphia.

Accompanied by their spouses—Kaine’s wife Ann and former President Bill Clinton—the duo began a post-convention bus tour across Pennsylvania designed to showcase the agenda that was set forth during last week’s Democratic National Convention.

Because the tour started in Philadelphia, Mayor Jim Kenney was on hand to help send the Democratic Presidential duo off to campaign. Philadelphia is the right place for this campaign to really begin because it matches Hillary Clinton, he said.

“I believe that America will elect Hillary Clinton in November,” Kenney said. “Philadelphia is a tough city with a lot of tough problems and it needs a tough president like Hillary Clinton to help us with them.”

While she was still basking in the history she made on Thursday night by becoming the first woman to lead a major party’s Presidential ticket, there is still a lot of work to be done, Clinton told the crowd.

While people might be tempted to write off Republican Presidential candidate Donald Trump, doing so would be a mistake, she said.

“We have 100 days to make our case,” Clinton said. “So what better place to do that than where our Founding Fathers understood that we are stronger together?”

As part of the tour, Clinton and Kaine went to various manufacturing plants to showcase the fact that despite what the Republicans tell you, America is still making things. In fact, former President Clinton was wearing a shirt made by a manufacturer in Pennsylvania during the tour. Spotlighting things like this are a big part of what the Clinton/Kaine ticket wants to do on the campaign trail, Hillary Clinton said.

But no one could blame Clinton if she wanted to take a few days off because taking a sledgehammer to a glass ceiling more than 200 years in the making takes a lot of energy.

On Thursday night, a journey that began in 2008 ended when Hillary Clinton accepted the Democratic Party’s nomination for President of the United States.

Clinton also took a moment to outline the differences between her and Trump. For one thing, she hopes to be a unifier, because “we work better as a country when we work together,” she explained.

And unlike her opponent, she’s got a plan to make it happen.

“[Trump] spoke for 70-odd minutes – and I do mean odd,” Clinton said. “And he offered zero solutions. No wonder he doesn’t like talking about his plans. You might have noticed, I love talking about mine.  In my first 100 days, we will work with both parties to pass the biggest investment in new, good-paying jobs since World War II; jobs in manufacturing, clean energy, technology and innovation, small business, and infrastructure. If we invest in infrastructure now, we’ll not only create jobs today, but lay the foundation for the jobs of the future. And we will transform the way we prepare our young people for those jobs. Bernie Sanders and I will work together to make college tuition-free for the middle class and debt-free for all. We will also liberate millions of people who already have student debt.”

After a bruising primary that pitted her against Vermont Sen. Bernie Sanders, Clinton emerged victorious. But Sanders’s supporters didn’t go quietly and staged a variety of protests that included taking over a media filing center and taking to the streets.

In her acceptance speech, Clinton offered both Sanders and his partisans an olive branch.

“I want to thank Bernie Sanders,” she said. “Bernie, your campaign inspired millions of Americans, particularly the young people who threw their hearts and souls into our primary. You’ve put economic and social justice issues front and center, where they belong.”

“And to all of your supporters here and around the country: I want you to know, I’ve heard you,” Clinton continued. “Your cause is our cause. Our country needs your ideas, energy, and passion. That’s the only way we can turn our progressive platform into real change for America. We wrote it together – now let’s go out there and make it happen together.”