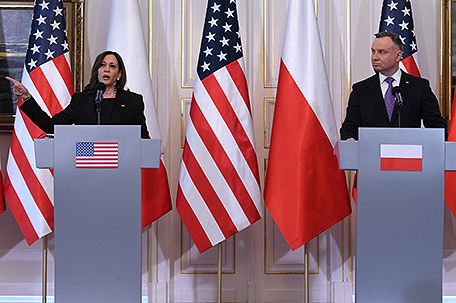 ABOVE PHOTO: US Vice President Kamala Harris, left, and Polish President Andrzej Duda give a joint press conference on the occasion of their meeting at Belwelder Palace, in Warsaw, Poland, Thursday, March 10, 2022. (Saul Loeb/Pool Photo via AP)

By Aamer Madhani And Lisa Mascaro

WARSAW, Poland — Vice President Kamala Harris’ trip to Warsaw to thank Poland for taking in hundreds of thousands of Ukrainians fleeing Russia’s invasion took an unexpected turn before she even left Washington. She’s parachuting into the middle of unexpected diplomatic turbulence over fighter jets.

The Polish government on Tuesday came out with a plan to transfer its Russian-made fighter planes to a U.S. military base in Germany, with the expectation that the planes would then be handed over to Ukrainian pilots trying to fend off Russian forces. In turn, the U.S. would supply Poland with U.S.-made jets with “corresponding capabilities.”

But the Poles didn’t run that idea past the Biden administration before going public with it, and the Pentagon quickly dismissed the idea as not tenable. Warplanes flying from a U.S. and NATO base into airspace contested with Russia would raise the risk of the war expanding beyond Ukraine.

Poland’s Prime Minister Mateusz Morawiecki on Wednesday stressed that Poland’s support to Ukraine has been defensive and that any decision whether to make the MiG-29 planes available to Ukraine would be up to the U.S. and NATO — and then only if all nations agreed.

Around the same time that Harris was arriving in Warsaw, the Pentagon was publicly rebuffing the idea of providing MiGs to Ukraine, even through a second country.

The plane issue provided a rare moment of disharmony in what has been a largely united effort by NATO allies to assist Ukraine without getting embroiled in a wider war with Russia.

And it meant Harris was flying into fractious terrain Wednesday as she opens a two-day visit to Poland and Romania and tries to patch things up.

“This fighter jet situation is a messy deal, and Harris will have to go there and smooth things out,” said Daniel Fried, who served as U.S. ambassador to Poland for President Bill Clinton and was a senior adviser in the George W. Bush and Barack Obama administrations. “There’s plenty of discussion on the way ahead that needs to be had with the Poles that is better to have in an in-person conversation.”

White House Press Secretary Jen Psaki said Harris’ trip was not focused on the aircraft issue and the matter would be “worked through military channels.”

Harris is slated to meet on Thursday with Morawiecki and Polish President Andrzej Sebastian Duda as well as with Ukrainians who have fled to Poland. She’ll also meet with Canadian Prime Minister Justin Trudeau while in Warsaw. Trudeau has been in Europe this week meeting with Ukraine allies.

Harris will travel on Friday to Bucharest, where she’s to meet Romanian President Klaus Iohannis.

The vice president also is expected to use the meetings in Poland and Romania to underscore the U.S. commitment to the NATO alliance and the need for continued humanitarian and military assistance for Ukraine. She’ll also highlight the need for allies to continue their close coordination.

Biden has applauded Poland and other eastern European countries for stepping up in the midst of what’s become an enormous humanitarian crisis that is only growing. Some 2 million people have fled Ukraine, and more than half of the refugees have arrived in Poland.

Biden on Tuesday said he was committed to helping Ukraine’s neighbors assist refugees. He has deployed 4,700 additional U.S. troops to Poland to bolster the defense of the eastern flank NATO ally.

“I’ve made it clear that the United States will share in the responsibility of caring for the refugees so the costs do not fall entirely on the European countries bordering Ukraine,” Biden said. He had been looking to Congress to pass a $14 billion aid package to assist Ukraine and its eastern European allies.

Hours after Biden spoke, Poland blindsided the White House with its proposal.

Victoria Nuland, undersecretary of state for political affairs, told the Senate Foreign Relations Committee that she saw the Polish government’s announcement as she was driving to Capitol Hill to testify.

Sen. Chris Murphy (D-Conn.) called it “curious” for Poland to announce its plan “without alerting us first.”

Secretary of State Antony Blinken did say on Sunday that the U.S. was working with Poland on plans to supply Ukraine with fighter jets and to “backfill” Poland’s needs. The Polish government, however, made clear that it would not send its fighter jets directly to Ukraine or allow its airports to be used.

Poland’s idea of transferring its MiGs to the U.S. did not come up during the talks with Blinken, according to a U.S. official familiar with the talks.

An administration official, who spoke on the condition of anonymity to discuss the delicate matter, said White House officials did not think the proposal would easily solve logistical challenges of providing aircraft to Ukraine and questioned the logic of transferring the planes to a major NATO base in Germany only to move them back to eastern Europe.

Ukraine President Volodymyr Zelenskyy has been pleading for NATO to impose a no-fly zone over Ukraine or provide Ukraine with fighter jets. NATO has nixed the no-fly zone idea, saying such a move would lead to the biggest conflict in Europe since World War II and spread further.

Rep. Michael McCaul of Texas, the top Republican on the House Foreign Affairs Committee, said late Tuesday he hoped the administration could work out a better agreement with Poland and “give them assurances that we will deliver” fighter jets. McCaul also said that more lethal drones could be another option to help provide air power to the Ukrainians

Harris traveled to the Munich Security Conference last month to rally European allies in the days ahead of the invasion. She also met with Zelenskyy and other European officials.

“The vice president’s trip to Poland and to Europe is part of our effort to show our strong support for our NATO allies and partners, the security assistance they’ve been providing, their role in accepting and welcoming refugees from Ukraine,” Psaki said.