Gorbachev mourned as rare world leader but some still bitter 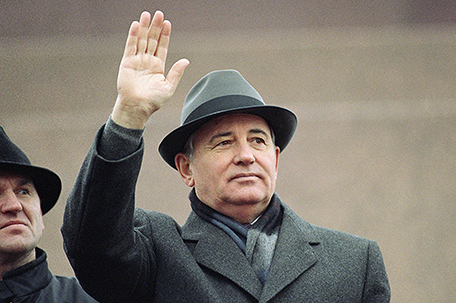 By Kirsten Grieshaber and Patrick Quinn

BERLIN — The passing of Mikhail Gorbachev, the last leader of the Soviet Union and for many the man who restored democracy to then-communist-ruled European nations, was mourned Wednesday as the loss of a rare leader who changed the world and for a time gave hope for peace among the superpowers.

But the man who died at age 91 on Tuesday was also reviled by many countrymen who blamed him for the 1991 implosion of the Soviet Union and its diminution as a superpower. The Russian nation that emerged from its Soviet past shrank in size as 15 new nations were created.

The loss of pride and power also eventually led to the rise of Vladimir Putin, who has tried for the past quarter-century to restore Russia to its former glory and beyond.

“After decades of brutal political repression, he embraced democratic reforms. He believed in glasnost and perestroika – openness and restructuring – not as mere slogans, but as the path forward for the people of the Soviet Union after so many years of isolation and deprivation,” President Joe Biden said.

He added that “these were the acts of a rare leader – one with the imagination to see that a different future was possible and the courage to risk his entire career to achieve it. The result was a safer world and greater freedom for millions of people.”

Gorbachev won the 1990 Nobel Peace Prize for his role in ending the Cold War but although widely feted abroad, he was a pariah at home.

Putin acknowledged that Gorbachev had “a deep impact on the course of world history.”

“He led the country during difficult and dramatic changes, amid large-scale foreign policy, economic and social challenges,” Putin said in a short telegram sending his condolences to Gorbachev’s family.

Gorbachev “realized that reforms were necessary and tried to offer his solutions to the acute problems,” Putin said.

Reactions from Russian officials and lawmakers were overall mixed. They applauded Gorbachev for his part in ending the Cold War but censured him for the collapse of the Soviet Union.

Oleg Morozov, a member of the main Kremlin party, United Russia, said Gorbachev should have “repented” for mistakes that went against Russia’s interests.

“He was a willing or an unwilling co-author of the unfair world order that our soldiers are now fighting on the battlefield,” Morozov said, in a reference to the current war in Ukraine.

World leaders paid tribute to a man some described as a great and brave leader.

Outgoing British Prime Minister Boris Johnson said that “in a time of Putin’s aggression in Ukraine, his tireless commitment to opening up Soviet society remains an example to us all.”

French President Emmanuel Macron described Gorbachev as “a man of peace whose choices opened up a path of liberty for Russians. His commitment to peace in Europe changed our shared history.”

German leaders praised Gorbachev for paving the way for their country’s reunification.

“We will not forget that perestroika made it possible to try to establish democracy in Russia and that democracy and freedom became possible in Europe, that Germany could be united, and the Iron Curtain disappeared,” Chancellor Olaf Scholz told reporters.

However, Scholz also pointed out that Gorbachev died at a time when many of his achievements have been destroyed.

“We know that he died at a time when not only democracy in Russia has failed — there is no other way to describe the current situation there — but also Russia and Russian President Putin are drawing new trenches in Europe and have started a horrible war against a neighboring country, Ukraine,” he said.

EU foreign policy chief Josep Borrell, who was part of the Spanish government when the Iron Curtain fell, remembered Gorbachev as a man who “sent a wind of freedom through Russian society. He tried to change the communist system from inside, which became impossible.”

Others in Europe challenged positive recollections of Gorbachev.

Gabrielius Landsbergis, the son of Vytautas Landsbergis who led Lithuania’s independence movement in the early 1990s, tweeted that “Lithuanians will not glorify Gorbachev.”

Memories are still fresh in the Baltic country of Jan. 13, 1991, when hundreds of Lithuanians headed to the television tower in Vilnius to oppose Soviet troops deployed to crush the country’s bid to restore its independence. In the clashes that followed, 14 civilians were killed and over 140 were injured. Moscow recognized Lithuania’s independence in August that year.

“We will never forget the simple fact that his army murdered civilians to prolong his regime’s occupation of our country. His soldiers fired on our unarmed protesters and crushed them under his tanks. That is how we will remember him,” Landsbergis wrote.

U.N. Secretary-General Antonio Guterres called Gorbachev “a one-of-a kind statesman who changed the course of history” and “did more than any other individual to bring about the peaceful end of the Cold War.”

“The world has lost a towering global leader, committed multilateralist, and tireless advocate for peace,” the U.N. chief said in a statement.

Gorbachev’s contemporaries pointed to the end of the Cold War as one of his achievements.

“Mikhail Gorbachev played a critical role in the peaceful end to the Cold War. At home, he was a figure of historical importance, but not in the way he intended,” said Robert M. Gates, who headed the CIA from 1991 to 1993 and later became U.S. defense secretary.

Israeli President Isaac Herzog called Gorbachev “one of the 20th century’s most extraordinary figures. He was a brave and visionary leader, who shaped our world in ways previously thought unimaginable.”

In Asia, he was remembered as a leader with the courage to bring change.

China’s government recognized Gorbachev’s role in healing relations between Moscow and Beijing. Gorbachev had been an inspiration to reformist thinkers in China during the late 1980s, and his visit to Beijing in 1989 marked a watershed in relations between the sides.

“Mr. Gorbachev made positive contributions to the normalization of relations between China and the Soviet Union. We mourn his passing and extend our sympathies to his family,” Foreign Ministry spokesperson Zhao Lijian said.

However, China’s Communist Party leaders also regard Gorbachev’s liberal approach as a fatal display of weakness and his moves toward peaceful coexistence with the West as a form of surrender.