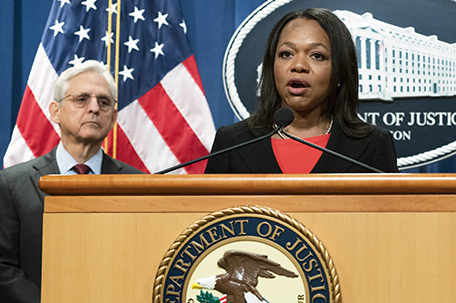 ABOVE PHOTO: Assistant Attorney General Kristen Clarke for the Department of Justice’s Civil Rights Division, with Attorney General Merrick Garland, speaks during a news conference at the Department of Justice in Washington, Thursday, Aug. 4, 2022. The U.S. Justice Department announced civil rights charges Thursday against four Louisville police officers over the drug raid that led to the death of Breonna Taylor, a Black woman whose fatal shooting contributed to the racial justice protests that rocked the U.S. in the spring and summer of 2020. (AP Photo/Manuel Balce Ceneta)

WASHINGTON — The early work of the Justice Department’s civil rights division meant confronting white supremacists who were intimidating Black voters, and 65 years later, its work is just as urgent amid a surge of hate crimes in the U.S., Attorney General Merrick Garland said Tuesday.

Hate crimes in the U.S. rose to the highest level in more than a decade in 2020, and on Tuesday a gunman was charged with hate crimes in a mass shooting at a Colorado LGBTQ nightclub. That case came a week after another mass shooter pleaded guilty to targeting Black shoppers at a Buffalo supermarket. Payton Gendron is also facing separate federal charges in the New York slayings, filed with help from the Justice Department’s civil rights prosecutors.

“We will not tolerate the resurgence of hate. We are fighting it with every tool we have,” said Assistant Attorney General Kristen Clarke. A longtime civil rights lawyer, she is the first Black woman to head the division and oversaw its part in the conviction of three Georgia men in the chasing and slaying of Ahmaud Arbery.

“No one should fear violence because of who they are,” added Deputy Attorney General Lisa Monaco.

As attorney general, Garland has vowed he would prioritize policing and civil rights to combat racial discrimination and he has said America doesn’t “yet have equal justice.” He will also work to confront the rise in extremist violence and domestic terror threats and restore the department’s political independence after years of controversial decisions and turmoil.

Since Garland assumed his role, the Justice Department has also opened sweeping investigations into the practices of police forces in Minneapolis, after the death of George Floyd, and in Louisville, Kentucky, after the death of Breonna Taylor, among other cities.

Created when President Dwight Eisenhower signed the Civil Rights Act of 1957, the division has played a key role in the county’s civil rights history as its more-than 600 employees enforce federal laws against discrimination on the basis of things like race, religion and disability, in arenas ranging from voting to housing to education.

Since the overturning of Roe v. Wade and its national guarantee of abortion rights, it’s also been part of a reproductive rights task force chaired by Associate Attorney General Vanita Gupta. The Justice Department is suing over Idaho’s restrictive abortion policy and has indicted at least 20 people who have been accused of obstructing access to abortion clinics.