First Hispanic director of the Census Bureau sworn in 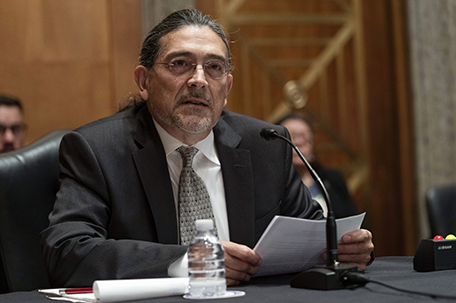 WASHINGTON (AP) _ Robert Santos was sworn in Wednesday as the head of the nation’s largest statistical agency, becoming the first Hispanic director of the U.S. Census Bureau.

The former chief methodologist and vice president at the Urban Institute became the bureau’s 26th director. The Senate in November approved Santos, a third-generation Mexican American statistician from San Antonio, Texas, for the job overseeing a bureau that conducts the once-a-decade census, often described as the nation’s largest civilian mobilization, as well as surveys that create the data infrastructure of the nation.

In his new job, Santos will be responsible for leading the agency as it lays the groundwork for executing the next census in 2030, as well as shepherding the last releases of data gathered during the 2020 census and supervising other bureau programs.

“Mr. Santos is a tremendous leader and I have full confidence that he will lead the Census Bureau with integrity in the years ahead,” said Secretary of Commerce Gina Raimondo in a statement.

Santos is the first person of color to be confirmed as Census Bureau director on a permanent basis. James Holmes, who is African American, was named acting director on a temporary basis in 1998 after the resignation of Martha Riche.

The National Association of Latino Elected and Appointed Officials (NALEO) Educational Fund said in a statement that Santos must now rebuild trust in the bureau following a 2020 census challenged by the pandemic, natural disasters, delays and attempts at political interference by the Trump administration.