EXPLAINER: Why does The Associated Press call US elections? 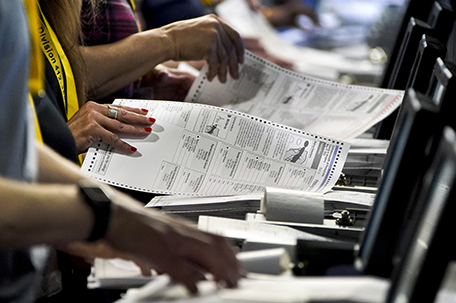 ABOVE PHOTO: Election workers perform a recount of ballots from the recent Pennsylvania primary election at the Allegheny County Election Division warehouse on the Northside of Pittsburgh, June 1, 2022. Unlike in many other countries, elections in the U.S. are highly decentralized, complex and feature a long list of races on the ballot, from president or Congress all the way down to local ballot measures or town council seats. Rules also vary greatly by state. Some give local election offices several weeks before Election Day to process mailed ballots, which includes steps that may include checking signatures or ID information. (AP Photo/Gene J. Puskar, File)

Why has The Associated Press tallied votes and declared winners in U.S. elections since the middle of the 19th century? Because no one else does.

Unlike the case in other democracies, the Founding Fathers didn’t establish a national clearinghouse for counting the vote, and the states all do it a little differently.

So, every U.S. election night, The Associated Press counts the nation’s votes, tallying millions of ballots and determining which candidates have won their races. It’s been done that way since 1848, when the AP declared the election of Zachary Taylor as president.

Here’s the rundown on the AP’s role in election race calling:

HOW DID THE AP GET THIS JOB?

Basically, no one wanted to wait for weeks to find out who won elections.

The Founding Fathers set up the Electoral College — a series of state elections to pick the president — to empower states in terms of their own elections processes. But they didn’t set up a centralized entity to count every citizen’s vote.

Instead, each state determines its own voting rules, laws, and procedures, including when polls close, which means counting doesn’t happen all at once.

“Once we split it into 50 parts, with 50 sets of rules, it’s a big job to try to compile all of that,” said Rick Edmonds, a media business analyst at the Poynter Institute for Media Studies. “Especially if you’re aiming to get a timely report out.”

News organizations began tallying votes themselves, including the AP, which AP Election Decision Editor Stephen Ohlemacher said began with “our own version of the Pony Express,” gathering vote totals from far-flung areas in the 1848 election. As technology evolved, so did that process, with AP eventually transmitting vote counts by teletype to centralized race-calling operations on the East Coast.

Even in general elections, states used to vote on different days, until the advanced technology of knowing how other places had voted led to the practice of a single Election Day.

U.S. television networks began doing their own analyses in the 1960 race between Richard Nixon and John F. Kennedy, examining data and calling winners one state at a time.

AP now uses a network of thousands of stringers and vote center clerks who take feeds, scrape official state websites for data and electronically add up votes across the country.

There is a national elections entity, the Federal Election Commission, which regulates some aspects of federal elections, like administering and enforcing federal campaign finance laws, and financing of federal campaigns. But the FEC has no oversight over election results, laws or vote counting.

HAVE THERE BEEN PROBLEMS?

Yes. In 1948, the Chicago Daily Tribune famously splayed “Dewey Defeats Truman” across the front page when early numbers made it look like Thomas Dewey was ahead. The tide turned, and President Harry S. Truman defied pollsters by scoring an upset victory.

In 2000, the major TV networks and the AP called Florida for Democrat Al Gore, relying largely on Election Day polling. As the votes were counted everyone reversed course.

The networks declared that Republican George W. Bush had carried the state, only to later retract that decision, too.

The AP held off on making the second call, deeming the race too close. More than a month later, a 5-4 U.S. Supreme Court stopped a recount and locked in Bush’s narrow victory.

“It was a very tense situation,” Ohlemacher said. “Sometimes the hardest thing to do is to not make a call.”

By two decades later, the AP’s process had further evolved, and in 2020, the AP was 99.9% accurate in all the race calls it made and perfect in declaring winners in the presidential and congressional races in each state.

DOES ANYONE WANT TO CHANGE THIS?

There were criticisms after the contentious 2020 presidential election, which saw challenges to the results from then-President Donald Trump and his allies in a number of states where he lost. After the AP and the major networks called the presidential race for Democrat Joe Biden, Trump tweeted: “Since when does the Lamestream Media call who our next president will be?”

Touting baseless claims of widespread voter fraud in the days after the election, Trump attorney Rudy Giuliani pointed out that the media have no official role in deciding who becomes the U.S. president.

That’s true, but it doesn’t appear there are any major moves to change that system.

And while control of the U.S. House and Senate are hotly contested in this year’s midterm elections, the fact that a presidential race isn’t on the ballot could alleviate concerns about the media’s role, Edmonds said.

“The question about who will control the House or Senate, that almost rises to the level of who will be elected president, though,” he said.

THERE ARE STILL FORMALITIES AFTER COUNTS AND CALLS

Winners may have been called, and concessions may — or may not — have been made but voting itself is over when polls close on Election Day. There’s still more work to do, as local election officials count and verify results through the canvass and certification process.

That means that race calls are made before results are official. But the AP only declares a winner when it’s certain that the candidate who’s ahead in the count can’t be caught.

EXPLAINER: States still in play and what makes them that way