EXPLAINER: What is the Strategic Petroleum Reserve? 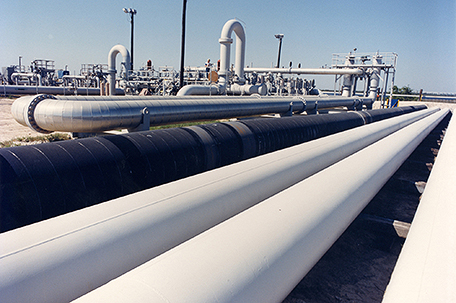 ABOVE PHOTO: An undated photo provided by the Department of Energy shows crude oil pipes at the Bryan Mound site near Freeport, Texas. President Joe Biden is dipping again into the nation’s petroleum stockpile to try to corral rising energy prices.The White House announced Thursday, March 31, 2022, that Biden ordered the release of 1 million barrels of oil per day from the strategic petroleum reserve for the next six months.(Department of Energy via AP)

By David Koenig And Cathy Bussewitz

DALLAS — President Joe Biden plans to release 15 million barrels of oil or more from the U.S. strategic reserves in an effort to stop gasoline prices from rising now that OPEC and its allies plan to cut production.

The administration hopes that tapping the Strategic Petroleum Reserve, a move that comes just weeks before the midterm elections, will bring relief to voters who have been struggling from high gasoline prices.

Global oil prices were rising even before Russia invaded Ukraine in February. When Biden announced a ban on Russian oil imports in early March, he acknowledged it would come at a cost to American consumers.

The drawdown announced Wednesday will complete the release of 180 million barrels authorized by Biden in March that was initially supposed to occur over six months. That has sent the strategic reserve to its lowest level since 1984 in what the administration called a “bridge” until domestic production could be increased. The reserve now contains roughly 400 million barrels of oil.

Tapping the reserve is among the few things a president can do alone to try to control inflation, which makes Americans poorer and often creates a political liability for the party in control of the White House.

Here is a look at what’s involved:

WHAT IS THE PETROLEUM RESERVE?

America’s Strategic Petroleum Reserve is a collection of underground salt caverns in Texas and Louisiana that can hold more than 700 million barrels of oil, although it is not currently full. The reserve held almost 409 million barrels earlier this month, down from more than 617 million barrels at about the same point last year, according to the U.S. Energy Department.

The reserve was created after the 1970s Arab oil embargo to give the United States a supply that could be used in an emergency.

WHY IS IT USED?

The U.S. now exports more petroleum than it imports, but the reserve remains and has been tapped for various reasons, from offsetting the impact of hurricanes and ship-channel closings to raising money for deficit reduction.

HOW DO THEY GET THE OIL OUT?

Oil is lighter than water — that’s why disasters like those caused by the Exxon Valdez tanker and the Deepwater Horizon drilling rig create slicks on the surface. To remove oil from the reserves, water is pumped into the salt caverns, making the crude float to the surface, where it is captured and sent through pipelines to refineries.

WHY IS BIDEN TAPPING THE RESERVE?

Supply and demand. Biden is hoping that by releasing more oil on the market, prices will fall. Prices did dip for nearly two weeks after Biden’s initial announcement about tapping the reserve back in November but they began to climb again before the month was over. U.S. crude is up more than 10% this year, but it has been falling steadily since June when a barrel cost more than $120. U.S benchmark crude futures were trading for around $83 Wednesday.

WILL GASOLINE GET CHEAPER?

What most people want to know is what’s going to happen to prices at the pump. Many factors go into the price of gasoline. Refineries buy crude oil in advance, so they could still be working with more expensive oil. States have differing tax rates that affect the price that motorists pay.

On Wednesday, the national average price for a gallon of regular was $3.85, up 18 cents from a month ago, according to auto club AAA.

The average is lower than that in many states in the middle of the country, but it’s higher in the Northeast and highest in the West. In California, it’s $5.94 a gallon.

Even if those prices don’t drop, Biden can argue that by tapping the reserve he tried to help.

WHO GETS HURT MOST?

Gasoline prices are regressive — lower-income people are more likely to spend a higher percentage of their money on gasoline than are affluent Americans — so increases hurt the most price-sensitive consumers. Kevin Book, managing director at Clearview Energy Partners, says those consumers might not show up in measures of the nation’s economy, “but they show up in vote counts … if we get down to it, that’s really what this is about.”

WHY DOES OIL MATTER?

The future of oil and gas in the U.S. is a political flashpoint and source of tension, especially as companies and government agencies grapple with climate change and the transition to cleaner sources of energy.

On one hand, the U.S. oil and gas industry has been praised by some political leaders for creating energy independence. Where the U.S. once relied heavily on imports, other nations now rely on the U.S. for oil. It’s also a job supplier: The oil and gas industry employs more than 10 million people in the U.S. and contributes about 8% of the nation’s gross domestic product, according to the American Petroleum Institute.

Companies that supply oil benefit from higher prices. But consumers don’t like it when those higher prices trickle down to the pump.

The institute has previously said that any release of oil from the strategic reserve should be paired with policy measures that encourage more U.S. energy production. That collides with Biden’s promise to reduce dependence on fossil fuels that contribute to climate change.