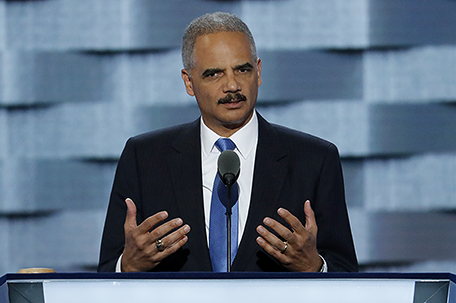 In a speech at the Democratic National Convention, former U.S. Attorney General Eric Holder urged delegates attending a meeting of the Party’s Black Caucus to mobilize their forces against voter suppression as the November presidential election nears.

Holder addressed an array of topics, at the Wednesday meeting, that ranged from Black Lives Matter to police brutality and from gun reform to voting rights. However, it was the latter—voting rights—that  he emphasized. He implored delegates to be cognizant that a citizen’s right to vote should not be taken for granted, but should be held sacred.

Holder also made it clear that he was stomping the political stump for Hillary Clinton, adding that he believes she would work to restore the erosion of voting rights.

“At a time when the right to vote is under siege, when Republicans brazenly assault the most fundamental right of our democracy, passing laws designed to stop people from voting, while closing locations in minority neighborhoods where people get the documents they need to vote, we need a president sensitive to these echoes of Jim Crow,” Holder said.

During this presidential election cycle, Holder urged all to act aggressively to ensure that every American will be able to exercise his or her right to participate in the democratic process, unencumbered by unnecessary restrictions that discourage and discriminate or marginalize voters.

Holder was referencing the voter ID laws, which have largely been imposed by Republican states to prevent voter fraud, a problem, in his appraisal does not exist”. Republican states have reported voter fraud, and have imposed voter ID laws in part to ensure that illegal immigrants aren’t able to vote. But in Holder opinion, those claims are exaggerated, and have led to laws at the state level that could ultimately disenfranchise voters.

Urging action, Holder called for the necessity to fight various voter ID laws around the country. Citing a recent Federal Appeals Court ruling in Texas that stuck down that state’s voter ID law. The court found that the law could disenfranchise hundreds of thousands of eligible voters who lack the requisite identification. The laws were viewed as an effort to suppress the votes of members of certain groups that most frequently vote for Democratic candidates.

The Texas voter ID law, widely seen as the most restrictive in the nation, requires voters to produce only certain, state-issued IDs. But there are an estimated 600,000 people across the state who don’t have the right ID, and most of those are poor, elderly, or members of minority groups. As a result, the law disproportionally disfranchised members of certain groups while welcoming others. That’s what many had been saying for years since the ID requirement became law, and that’s what an appeals court ruled.

Holder also had harsh criticism for the Supreme Court’s 2013 decision in the Shelby County vs. Holder case, which Democrats believe gutted a key piece of the Voting Rights Act of 1965. Holder called that ruling a “deeply misguided, flawed and unwise decision.”

The landmark US Supreme Court ruling struck down language in the Voting Rights Act of 1965 that describes which states and counties are required to seek federal approval for changes to their voting rules. The states and counties listed under the law reflect the realities of Civil Rights era America, and the Supreme Court essentially held they need to be updated to reflect improvements to those voting systems over the years.

Democrats have said that decision essentially “gutted” the Voting Rights Act, and immediately called for efforts to update federal clearance rules through legislation.  It is Holder’s contention that Clinton, if elected, would work to restore voting access in locales where the 1965 Voting Rights Act has been rolled back.

“We need a president who holds the right to vote as sacred and stands firm against any kind of modern-day poll tax” Holder asserted.

Holder’s reference to the “poll tax” was a reminder that through the uses of poll taxes, literacy tests and other means, Southern states were able to effectively prevent may African Americans  from voting, under rights granted by the 15th Amendment to the Constitution in 1870. It would take the passage of the Voting Rights Act of 1965, a landmark piece of federal legislation, signed into law by President Lyndon B. Johnson during the height of the Civil Rights Movement on august 6, 1965, before the majority of African American in the South were registered to vote. Congress later amended the Act five times to expand its protections.

According to Virgie M. Rollins, DNC Black Caucus Chair, Holders appearance was an opportunity to educate delegates about the legislative landscape they are confronted with and to provide them with the necessary tools to combat attempts to disenfranchise voters. “The protection of the vote, which is a democratic right, must be protected at all cost,” opined Rollins, who is advancing the party’s grassroots voting initiative for Hillary Clinton’s presidential election.