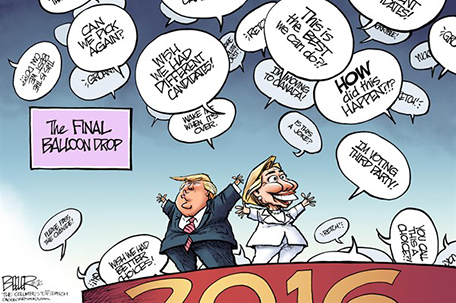 In a year where the bizarre has been commonplace, the Presidential Contest between Hillary Clinton and Donald Trump makes it’s own absurd sense.

You’ve gotta admit, 2016 has been a pretty strange year.

From the appearance of some sort of mass shooting or terrorist attack every week to the deaths of just about every legendary musician you can think of ranging from David Bowie to Prince, 2016 has been one of those years that makes you reach for a bottle—be it aspirin or alcohol.

So when I packed up to get on the bus and go to Cleveland for the 2016 Republican National Convention, I kinda figured that between this political gathering and the Democratic National Convention I’d be going to when I came back to Philadelphia, I wasn’t expecting the same “all over but the shouting” conventions I had covered in years past.

I was expecting unusual. I mean, hey, when the former host of “Celebrity Apprentice” is going to be your party’s presidential nominee, unusual is probably an understatement.

But while I expected unusual, what we ended up getting from the RNC and DNC has shown me that perhaps I need to expand my imagination a little.

No, actually, I need to expand it a lot.

Because if anyone had told me that we’d witness a couple of floor fights, walk outs, the takeover of a media tent, a 73-minute acceptance speech, thunderstorms and some of the other nonsense we all got to see during the last two weeks, I’d have never believed them.

But that’s what happened.

And to be honest, when you consider the rest of 2016, the fact that either Hillary Clinton or Donald Trump is probably going to be moving into the White House when President Barack Obama and company clear out in January 2017 makes perfect, absurd sense.

The extremes on both sides reared their ugly heads and while the Extreme Left didn’t get their standard bearer the nomination, the Extreme Right is wondering “How did we get here?”

Although many of us didn’t care for it much at the time, one thing that the Republicans were really good at during the era of Ronald Reagan was discipline. Message discipline. Candidate discipline. Overall discipline.

I mean, the unofficial 11th Commandment for Reagan’s GOP was “Thou Shalt Not Speak Ill Of Another Republican”.

If the RNC was any indication, that era is over. Done. Kaput.

The “deal with the devil” that former Rep. John Boehner made with the Tea Party in 2010– the deal that gave the people who had always been in the basement and only let out to vote control of the whole Republican Party– has borne the kind of fruit we all kinda thought it would.

And the name of that fruit is Donald Trump.

Trump’s existence has trashed what was left of the discipline that was the Republican Party. From the first day of the RNC, where #NeverTrump delegates tried to get the delegates released from their electoral commitments to the request that delegates “vote their conscience” from former candidate Sen. Ted Cruz, to the nearly empty hall that Trump spoke into during the convention’s last night, things at Quicken Loans Arena got more than a little messy.

And hateful. And scary. And showed us that possibly the only people more frightening than Donald Trump and his dizzying lack of intellect were the people who crowded into stadiums to see him speak.

But the Democrats had no reason to cheer. Their convention started with the world finding out what a lot of Democratic operatives had already known: Debbie Wasserman Schultz had no business being DNC chair. With the publication of DNC internal communications by Wikileaks the Sunday before the convention started, we all found out that message discipline wasn’t something she was big on.

It also became all of the excuse that partisans of Sen. Bernie Sanders needed to try and disrupt just about everything, including a media tent behind the Wells Fargo Center. These so-called progressives booed everyone on the first night of the DNC who praised Hillary Clinton, including Rep. Elijah Cummings and Sen. Cory Booker.

By now, everyone’s heard about the most powerful part of the DNC. When Khizir Khan held up his pocket copy of the Constitution and challenged Trump to read it while talking about his son, a soldier killed in the Middle East who would have been denied entry under the Republican candidate’s Muslim ban, it was kind of the shot heard round the world.

Trump responded in a way that surprised no one, disparaging the Khans and even doubling down on it by equating their sacrifice with building his business empire and incurring the wrath of everyone from veterans groups to members of Congress.

Which brings me to the most spectacular part of all this.

The presidential race is still close.

You would think that after coming after a pair of Gold Star parents, calling on the Russians to hack into the email accounts of his presidential rival, a former Secretary of State, and far too many other things to mention, he’d be getting his clock cleaned by a competent woman who, despite being disliked by a great deal of people for reasons that sometimes don’t make a whole lot of sense, is more than qualified to be president.

But that’s not what’s going on here. Is sexism playing a part? Maybe. But, it’s still close. And Republican Party leaders refuse to put some water on this burning trash fire.

We have less than 100 days left before we get to pick the next President of the United States. It’s going to be a tough vote for a lot of us.

Unfortunately, the one thing that could make it a lot less tough isn’t an option.

Less than 100 days isn’t enough time to rescind the constitutional amendment that restricts a president to two terms.