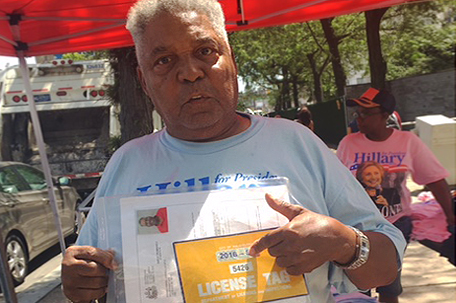 On Sunday, South Broad St. was all decked out for the Democratic National Convention with the flags of the 50 states, the District of Columbia and U.S. Territories.

Mississippi’s flag, the last state flag to still incorporate the Confederate battle flag, was taken down Monday afternoon by the police department after a group of irate citizens sat on the roadway advocating for its removal, according to the Associated Press. City officials later said both protesters and nearby residents objected to the flag’s symbolism.

While many Mississippians proudly embrace the Confederacy as part of their history, protesters in Philadelphia were clearly saying that the state flag reflected bigotry and hate to them.

They belong to a group that no mother ever asks to join. Each had lost a son or daughter to gun violence, several in deadly encounters with law enforcement officers.

Dubbed “Mothers of the Movement,” they came together at the urging of Hillary Clinton to share their stories Tuesday night at the Democratic National Convention, which has highlighted both the challenges facing law enforcement officers as well as controversial deadly-force policies and police tactics.

“So many of our children are gone but not forgotten,” said Geneva Reed-Veal, mother of Sandra Bland, who died in a Texas jail after getting arrested for a traffic violation. “I’m here with Hillary Clinton because she is a leader and a mother who will say our children’s names. Hillary knows that when a young black life is cut short, it’s not just a personal loss. It is a national loss. It is a loss that diminishes all of us.”

Lucia McBath’s young son, Jordan Davis, was shot while sitting in a car at a Florida gas station. The stranger who pulled the trigger had complained Davis’ music was too loud.

“I lived in fear that my son would die like this,” McBath said. “I even warned him that because he was a young black man he would meet people who didn’t value him or his life. That is a conversation that no parent should ever have with their child.”

The other mothers were:

–Maria Hamilton, mother of Dontré Hamilton, who was killed in Milwaukee by a police officer.

–Glen Carr, mother of Eric Garner who died as a result of compression of the neck – a chokehold – during an arrest. His death was ruled a homicide.

–Lezley McSpadden, mother of Michael Brown, whose death during an arrest in Ferguson, Mo. set off protests nationwide.

–Cleopatra Pendleton-Cowley, mother of Hadiya Pendleton, a Chicago teenager shot while in a park with friends.

–Wanda Johnson, mother of Oscar Grant, the young man killed by a transit officer and whose tragic death was brought to the big screen in the film, “Fruitvale Station.”

“We’re going to keep telling our children’s stories, and we’re urging you to say their names,” McBath said.

The Fraternal Order of Police expressed “shock and anger” over the decision to allow the “Mothers of the Movement” to address the DNC.

Edward Perrell is not a business tycoon, though he zips around this country. Recently, he was in Cleveland selling T-shirts to some very, very, very happy Cavaliers fans. This week, the hustling entrepreneur, who is an African American, has been in Philly trying to sell T-shirts to supporters of Hillary Clinton and Bernie Sanders. 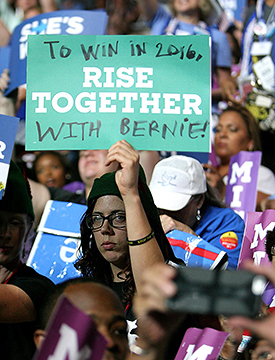 Philadelphia’s welcome, however, has fallen short of his expectations. Before he arrived, he called the City of Philadelphia to determine if he needed a business license for the week he would be in town. Turns out, he did and an annual license cost $300.

Initially, Perrell, who lives in Las Vegas, tried to set up his booth in front of the Municipal Services Building across from City Hall, where the Bernie or Bust protesters had staked out ground. It was not long before staff from the city’s Department of Licenses & Inspection (L & I) chased him away. He was told his license did not give him the right to set up in Center City, which is the economic heart and pulse of the metropolis and home to many convention hotels.

Karen Guss, L&I’s communications director, explained that a limited number of Center City vending licenses are available, and each of those comes with a specific location where vendors can set up.  These premium licenses, however, are only distributed by lottery, with the last one taking place two years ago.

So DNC vendors who purchased vending licenses found themselves outside of the business and political hubs, a point some hadn’t factored into business models or sales equations.

“We have learned a lot from this experience,” said Guss, who added that L&I received complaints from some other DNC vendors as well.

All L&I staff may not have communicated the licensing restrictions clearly, she said. So some small vendors like Perrell were surprised when they ended up on streets where people were focused on getting to work or school, rather than on promoting their politics.

This being the City of Brotherly Love, L&I didn’t want Perrell to walk away feeling like an unappreciated guest. The city will refund the $300 he paid for his business license, Guss said.

Perrell, who eventually set up his booth on Spring Garden Street, a residential neighborhood blocks from downtown, was ecstatic – but not just because of the refund. He said it was heartening somebody in Philly was listening to the little guys, who have had a starring role at both the DNC and RNC conventions.

“I wasn’t feeling the love, and I thought this was the city of brotherly love,” Perrell said. “I feel better now. Somebody cares.”