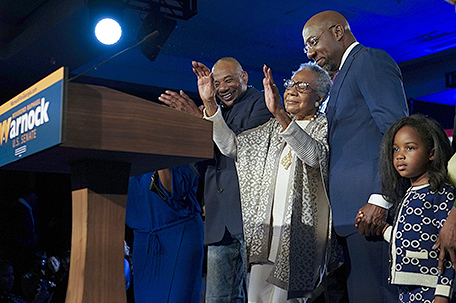 ABOVE PHOTO: Democratic Sen. Raphael Warnock speaks as he stands with his mother Verlene Warnock and his daughter Chloe during an election night watch party, Tuesday, Dec. 6, 2022, in Atlanta. Sen. Warnock has defeated Republican challenger Herschel Walker in a runoff election in Georgia. (AP Photo/John Bazemore)

By Bill Barrow And Jeff Amy

ATLANTA — Democratic Sen. Raphael Warnock defeated Republican challenger Herschel Walker in a Georgia runoff election Tuesday, ensuring Democrats an outright majority in the Senate for the rest of President Joe Biden’s current term and capping an underwhelming midterm cycle for the GOP in the last major vote of the year.

With Warnock’s second runoff victory in as many years, Democrats will have a 51-49 Senate majority, gaining a seat from the current 50-50 split with John Fetterman’s victory in Pennsylvania. There will be divided government, however, with Republicans having narrowly flipped House control.

“After a hard-fought campaign — or, should I say, campaigns — it is my honor to utter the four most powerful words ever spoken in a democracy: The people have spoken,” Warnock, 53, told jubilant supporters who packed a downtown Atlanta hotel ballroom.

“I often say that a vote is a kind of prayer for the world we desire for ourselves and for our children,” declared Warnock, a Baptist pastor and his state’s first Black senator. “Georgia, you have been praying with your lips and your legs, your hands and your feet, your heads and your hearts. You have put in the hard work, and here we are standing together.”

In last month’s election, Warnock led Walker by 37,000 votes out of almost 4 million cast, but fell short of the 50% threshold needed to avoid a runoff. The senator appeared to be headed for a wider final margin in Tuesday’s runoff, with Walker, a football legend at the University of Georgia and in the NFL, unable to overcome a bevy of damaging allegations, including claims that he paid for two former girlfriends’ abortions despite supporting a national ban on the procedure.

“The numbers look like they’re not going to add up,” Walker, an ally and friend of former President Donald Trump, told supporters late Tuesday at the College Football Hall of Fame in downtown Atlanta. “There’s no excuses in life, and I’m not going to make any excuses now because we put up one heck of a fight.”

Walker’s defeat bookends the GOP’s struggles this year to win with flawed candidates cast from Trump’s mold, a blow to the former president as he builds his third White House bid ahead of 2024.

Democrats’ new outright majority in the Senate means the party will no longer have to negotiate a power-sharing deal with Republicans and won’t have to rely on Vice President Kamala Harris to break as many tie votes.