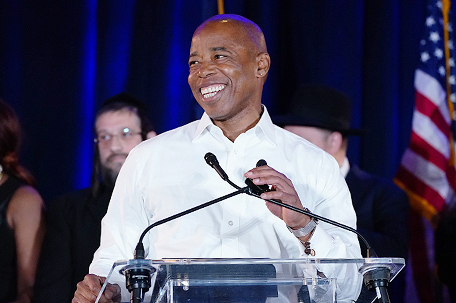 NEW YORK — Democrat Eric Adams has been elected New York City mayor, defeating Republican Curtis Sliwa on Tuesday in a contest far easier than his next task: steering a damaged city through its recovery from the coronavirus pandemic.

Adams, a former New York City police captain and the Brooklyn borough president, will become the second Black mayor of the nation’s most populous city. David Dinkins, who served from 1990 to 1993, was the first.

“Tonight, New York has chosen one of you — one of our own. I am you. I am you,” Adams told a jubilant crowd at his victory party at a hotel in his hometown borough of Brooklyn. “After years of praying and hoping and struggling and working, we are headed to City Hall.”

Adams’ victory seemed all but assured after he emerged as the winner from a crowded Democratic primary this summer in a city where Democrats outnumber Republicans 7 to 1.

As a candidate, Adams referenced his working-class roots and being raised with five siblings by a single mother who cleaned houses. He described carrying a garbage bag of clothes to school out of fear his family would be evicted.

He brought a photo of his late mother with him Tuesday as he voted in Brooklyn. He teared up as he described his life as a classic New York story, rising from a poor upbringing to become the leader of the city.

Adams, 61, will take office Jan. 1 in a city where more than 34,500 people have been killed by COVID-19, and where the economy is still beset by challenges related to the pandemic. The tourism industry hasn’t come back yet. Office buildings remain partly empty, with people still working from home. Schools are trying to get children back on track after a year of distance learning.

After he finished speaking, Adams was joined onstage by Gov. Kathy Hochul, who pledged “a whole new era of cooperation” between the state in the city, after eight years in which the former governor, Andrew Cuomo, was constantly at adds with Mayor Bill de Blasio.

“We will fight for you, not fight each other anymore,” she said.

De Blasio, a Democrat, was limited by law to two terms.

Sliwa, who founded the Guardian Angels anti-crime patrol, ran a campaign punctuated by his penchant for stunts and his signature red beret. He portrayed Adams as an out-of-touch elitist.

Adams dismissed Sliwa as a clown and painted him as untrustworthy for having admitted he made up claims years ago about being kidnapped and of other exploits from the Guardian Angels’ patrols.

Sliwa said at an election night party Tuesday that he tried to call Adams to concede but couldn’t immediately reach him.

“I am pledging my support to the new Mayor Eric Adams because we’re all going to have to coalesce together in harmony and solidarity if we’re going to save this city that we love,” Sliwa said.

Adams brings a nuanced perspective on policing and crime, drawing on his experiences as a former police captain, an officer who gained early attention for speaking critically about the department he served in, and as someone who experienced police brutality as a teen. At age 15, he said, he was beaten by police officers when he was arrested for trespassing.

He rejected progressive mantras to “defund the police,” though, and said he was proud of his time in the department.

Adams became a transit police officer in 1984. As a police officer, he cofounded an advocacy group, 100 Blacks in Law Enforcement Who Care, which pushed for criminal justice reform and decried police brutality.

Adams retired from the police department in 2006. He then won a seat in the state Senate, representing Brooklyn. In 2013, he was elected borough president.

Though seen as the moderate candidate in the crowded Democratic primary, one who offered a business-friendly approach, Adams has rejected the label and maintains he is a progressive.

He is a vegan who wrote a book in 2020 about how a plant-based diet helped him with diabetes.

Adams faced questions as a candidate about his residence after Politico reported he was sleeping at his Borough Hall office often. He co-owns an apartment in Fort Lee, New Jersey, with his partner, Tracey Collins. He tried to dispel the questions during the campaign by giving reporters a tour of a basement apartment in Brooklyn’s Bedford-Stuyvesant neighborhood that he said is his primary residence.

Sliwa tried to spotlight the issue during the campaign by crossing a bridge to Fort Lee while holding a milk carton featuring a picture of “missing” Adams.

Sliwa also became known for living with more than a dozen rescue cats in his very small apartment with his wife. He brought one of the cats with him Tuesday to his Manhattan polling place but was told the animal had to stay outside.

In his concession speech, Sliwa made it clear he wasn’t going to fade from the headlines.

“You will have Curtis Sliwa to kick around,” he vowed.