Day Two and Three of the DNC 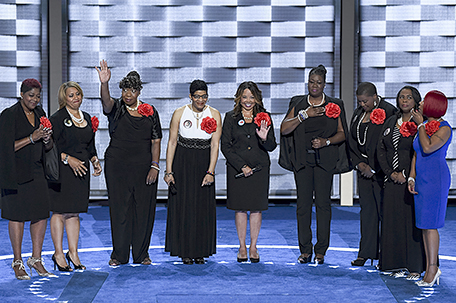 ABOVE PHOTO:  Mothers of the Movement, those who have lost children to police violence, take the stage at the Democratic National Convention in Philadelphia on Tuesday, July 26, 2016.  (Photo By Bill Clark/CQ Roll Call) (CQ Roll Call via AP Images)

The energy surrounding days two and three of the Democratic National Convention at The Wells Fargo Center was something special; a new experience for Philadelphia.

Hillary Rodham Clinton officially made history, becoming the first woman nominated for president by a major political party in the United States. The cameos were endless — with actors like Rosario Dawson, Shailene Woodley and Bryan Cranston walking the halls and floors of the Wells Fargo Center. Throughout both nights, celebrities like America Ferrera, Meryl Streep, Erica Alexander, Alicia Keys,Andra Day, Lenny Kravitz and many others took the main stage to offer their support for Hillary Clinton.

Many echoed the words we heard from First Lady Michelle Obama just one day prior — “I’m With Her”. Perhaps the most moving of all of the endorsements came from the Mothers of the Movement, a group of mothers who lost their sons and daughters in racially charged incidents. Among them was Geneva-Reed Veal, the mother of Sandra Bland. Her voice cracked as she spoke about her late daughter,

“She [Sandra] was the fourth of five daughters, and she was gone. No, no —  not on administrative leave, but on permanent leave from this earth. Found hanging in a jail cell after an unlawful traffic stop and an unlawful arrest.”

Day Two ended with former President Bill Clinton appealing to the crowd by sharing personal anecdotes of Hillary Rodham Clinton as wife, mother,advocate, and as his best friend. President Clinton attributed tenacity to Hillary’s indefatigable mission to improve the lives of Americans. Tears streamed down the faces of many with hope in their eyes, acknowledging that another barrier was broken, another milestone reached.

Day Three of the DNC was filled with equally powerful endorsement speeches from: Ex Marine Captain Kristen Kavanaugh, Admiral John Hutson, and NY Mayor Michael Bloomberg. Sarcasm and laughter was plentiful. The arena erupted with applause when he stated, “I built a business and I didn’t do it with a million dollar check from my father.” Every speaker spoke candidly about how our country would suffer at the hands of a President Donald Trump.

Yet even with the overwhelming amount of support that Hillary Clinton has received throughout the DNC, there is still a very large elephant in the room (pun intended). Amongst the presence of thousands of Hillary supporters that night were Senator Bernie Sanders supporters chanting “Bernie or Bust!” despite his endorsement of Hillary Clinton. The looming question remains; what is next for the Democratic Party? Will Hillary Clinton’s nomination unite or divide the party? Will the Bernie supporters vote for Hillary in November? Though the campaign is far from over, only time will tell.