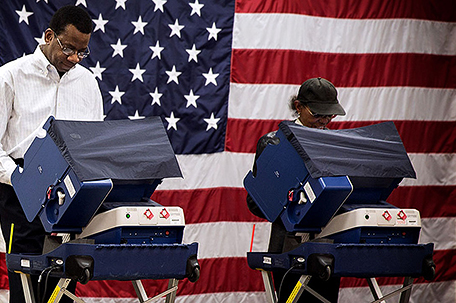 ‘If we don’t vote in the upcoming presidential election. We stand the chance of moving backwards. We are at a delicate place in this country. The political gains we’ve achieved are being eroded. You can’t stay at home and not vote and then complain about the results after the election. Get involved and make your vote count.”

“The important issues hinge on jobs, education and the economy. We must focus on solving those concerns to ensure that everyone in the country prospers. If we avoid adopting the necessary solutions, we the people, in this country, are in grave danger. To fight for our democratic way of life, we must use our voting power.”

“We must remember that there are people who died for our right to vote. There are times when we can be disillusioned by the political, social and economic direction of the country. However, we can do something about it—VOTE! We should never think that our vote doesn’t matter. It does.”

“To ensure a Republican defeat in November, Democrats must have a near-record turnout. Bernie Sanders’ supporters are critical. Vote for Hillary Clinton, who has experience and a track record. We don’t know what the Republican agenda is. We do know that what Donald Trump is spewing doesn’t bode well for the country. To those voters who believe they are choosing the lesser of two evils. Don’t withhold your vote in this election. Vote for Hillary. Half a loaf is better than none. Take the best of the loaf…”

“As the upcoming presidential election approaches, think about the consequences for not voting. The Republicans want to win by any means necessary. Some Republican-dominated states have imposed voter ID laws designed to suppress the rights of voters. To defeat them, participate in the election process, perhaps as a poll watcher that reports voter fraud. Don’t give up. You vote does count.”