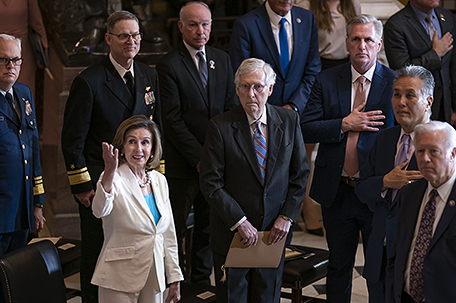 ABOVE PHOTO: Speaker of the House Nancy Pelosi, D-Calif., Senate Minority Leader Mitch McConnell, R-Ky., and House Minority Leader Kevin McCarthy, R-Calif., stand together as they attend a Congressional Gold Medal ceremony to honor members of the Merchant Marine who served in World War II, at the Capitol in Washington, Wednesday, May 18, 2022. (AP Photo/J. Scott Applewhite)

WASHINGTON — Congress has bestowed its highest honor on merchant mariners who fought in World War II, almost eight decades after the conflict in which more than 8,000 of them were killed.

More than two years after Congress voted to approve the award, leaders on Capitol Hill last Wednesday awarded the Congressional Gold Medal to surviving merchant mariners who provided equipment, food, fuel and other materials to military troops around the world during World War II. While they suffered what was thought to be the highest per capita casualty rate in the war, they did not receive veteran status until 1988 because they are not a branch of the military.

Dave Yoho, a 94-year-old veteran of the service, said at the ceremony in Statuary Hall that he and his fellow mariners “brought home the scars of war” but were forgotten.

“This war ended before most of you were born, but there was a sense of patriotism” among those who served, Yoho said. He was accompanied by another merchant marine veteran whom Yoho said was 101 years old.

The U.S. Merchant Marine provided goods in many different arenas during the war, including at the invasion of Normandy. The legislation passed by Congress in March 2020 awarding the medal cites a 1944 New York Times article that said the Normandy invasion “would not have been possible without the Merchant Marine.”

Congressional leaders thanked the mariners for their service and said it was long overdue.

“Thank you for being there when others weren’t watching,” said House GOP Leader Kevin McCarthy. “This is a beautiful medal.”

Democratic Rep. John Garamendi of California, one of the original sponsors of the legislation, said it had taken Congress 50 years to award the medal. He noted that the veterans’ successors are still on the seas providing goods around the world.

The medal will be displayed in the American Merchant Marine Museum in New York.

Black Navy veteran to get medal for WWII actions