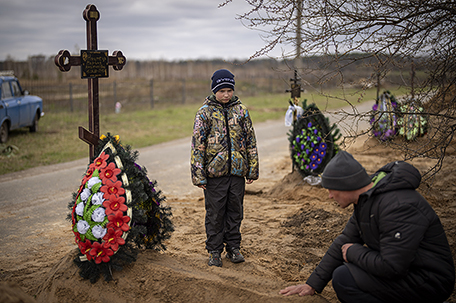 ABOVE PHOTO: Vova, 10, looks at the grave of his mother, Maryna, while his father, Ivan Drahun, prays during her funeral in Bucha, on the outskirts of Kyiv, Ukraine, on Wednesday, April 20, 2022. Vova’s mother died while they sheltered in a cold basement for more than a month during the Russian military’s occupation. (AP Photo/Emilio Morenatti)

WASHINGTON — President Joe Biden on Thursday announced an additional $800 million in military aid to help Ukraine fight back in its strong but increasingly difficult battle against the Russian invasion, but he also warned that Congress will need to approve additional assistance if the U.S. is to keep up its support.

The new military package includes much needed heavy artillery, 144,000 rounds of ammunition, and drones for Ukrainian forces in the escalating battle for the Donbas region of eastern Ukraine. It builds on roughly $2.6 billion in military assistance that Biden had previously approved.

The aid, Biden said, will be sent “directly to the front lines of freedom.”

“Putin is banking on us losing interest,” Biden said. The Russian president is betting that “Western unity will crack … and once again we’re going to prove him wrong.”

Biden also announced that all Russian-affiliated ships would be barred from U.S. ports.

And he announced that the United States would provide an additional $500 million in direct economic assistance to the Ukrainian government. That raises the total U.S. economic support to $1 billion since Russia’s invasion began nearly two months ago.

He said that $13.6 billion approved last month by Congress for military and humanitarian assistance was “almost exhausted.”

“Next week, I’m going to have to be sending to Congress a supplemental budget request to keep weapons and ammunition deployed without interruption,” Biden said. Congress has signaled it is receptive to further requests and has been expecting there would be a need for further help for the Ukrainians.

Biden did not detail how much additional funding he would request, adding that he was consulting with defense officials on the matter.

Biden spoke on the new assistance, and more broadly about the situation in Ukraine, hours after Russian President Vladimir Putin claimed victory in the strategic city of Mariupol. Putin, however, ordered his troops not to risk more losses by storming the last pocket of Ukrainian resistance in the war’s iconic battleground.

Russian forces have destroyed much of southeastern port city, which has witnessed some of the fiercest fighting of the war. By Russian estimates, about 2,000 Ukrainian forces remain holed up in a sprawling steel plant, even as Russian forces continue to pound the industrial site and repeatedly issue ultimatums for Ukrainian forces’ surrender.

Russian troops have besieged the port city since the early days of the conflict and largely reduced it to ruins.

Biden in a brief exchange with reporters following his remarks called Russia’s claim on Mariupol “questionable.”

The new tranche of military assistance is expected to include 72 155mm howitzers, 144,000 artillery rounds, 72 vehicles used to tow to the howitzers onto the battlefield, and over 121 Phoenix Ghost tactical drones, as well as field equipment and spare parts.

The 72 howitzers are in addition to the 18 announced last week the U.S. was transferring to Ukraine.

Biden’s decision to quadruple the number pledged in an arms package announced just last week reflects what is shaping up as a major ground battle in the contested Donbas region of eastern Ukraine.

The Russians have been deploying additional artillery there in recent days as they aim to expand their offensive and attempt to take full control of the Donbas after retreating from a failed attempt to capture Kyiv, the capital. Heavy weaponry like artillery is expected to play a key role in the fighting in the relatively confined Donbas area where Ukrainian and Russian-backed separatists have been battling since 2014.

A senior U.S. defense official said training of Ukrainian personnel on American 155mm howitzers has begun in a European country outside Ukraine.

Biden on Wednesday lauded U.S. military officials for “exceptional” work arming Ukraine as he gathered the nation’s military brass for their first in-person White House group meeting of his presidency.

The announcements on new aid came against the backdrop of International Monetary Fund and World Bank spring meetings dominated by conversations over how to manage the spillover from Russia’s war in Ukraine.