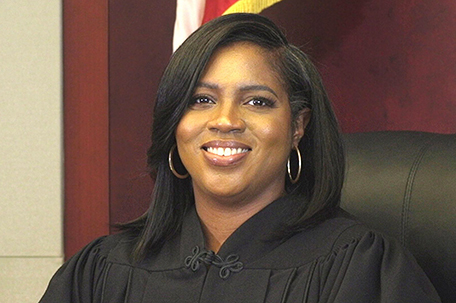 For Judge Tamika Lane, running for a seat on Pennsylvania’s Superior Court is about giving a voice to everyone in the Commonwealth.

For much of her life, Tamika Lane has understood that, in the words of the late Muhammad Ali, “Service is the rent you pay for your room here on Earth.”

From teaching middle school civics and social studies, to using her legal degree to help make policy and preserve voting rights, to bringing civics education to high school students, to her current position as a judge in the Court of Common Pleas, Lane has taken the words of her late grandmother to heart, she said.

“Growing up, my grandmother always used to say that ‘it’s not about you’,” Lane said. “It’s about service to others.”

As an extension of that service, Lane is one of three Democrats running for Superior Court in the May primary election. Should she win, she would be on the ballot to fill a 10-year term on the 15-member court. Due to the vacancy on the ballot, the court currently seats seven Republicans and seven Democrats.

For a court that hears about 8,000 cases a year, many of them criminal, that’s unacceptable, Lane believes.

“We need to make sure that we have our voices heard across the Commonwealth,” she said. “You have to be the change you want to see, even if that means moving out of your comfort zone. Seventy percent of the cases the court hears are criminal and Black and brown communities are disproportionately impacted by that. Because the [Pennsylvania] Supreme Court doesn’t take all cases, Superior Court cases are used as precedents. So, it’s an important court.”

Because this is a statewide race, the West Philadelphia native is going out into all 67 of Pennsylvania’s counties to try and get to know voters. What she’s finding is that the need to be heard and represented is a universal one.

But her climb is uphill in many ways. Pennsylvania’s record of electing people of color to statewide offices is less than stellar. Currently, the Commonwealth has one row officer of color, Auditor General Tim DeFoor, and he ran in a race where his opponent was also a person of color, Nina Ahmad.

That said, Lane is finding that her message of representation is, hopefully, motivating people to vote.

“There’s an historic number of African American women running statewide as judges,” she said. “But it’s hard. You’re going to have to have at least $2 million on hand for the general election. We need to make sure that we support people that step out and are trying. My cousin gave me $25 and it meant the world to me. Every little bit helps. If you have nothing to give, give your time.”

The Pennsylvania Supreme Court recently appointed Lane co-chair of the County Adult Probation and Parole Advisory Committee (CAPPAC). She also serves as the board chair for the Judges Board of City Trust Committee, co-chair of the Local Criminal Rules Committee and as a member of the Communication and Community Affairs, Jury, FYI and Women Judges Initiative committees.

Lane has been endorsed by the Democratic City Committee and has been recommended for the Superior Court by the Pennsylvania Bar Association. She is a graduate of Howard University and has a Juris Doctor degree from the Rutgers-Camden School of Law. Before becoming a judge, she was chief legal council for State Sen. Anthony Williams and the Democratic executive director for the Pennsylvania State Senate Government Committee. She was also a major trial attorney for the Defenders Association of Philadelphia.

Mail-in voting has started now for the May primary. In-person voting will be held on May 18.