A “March” in Kensington 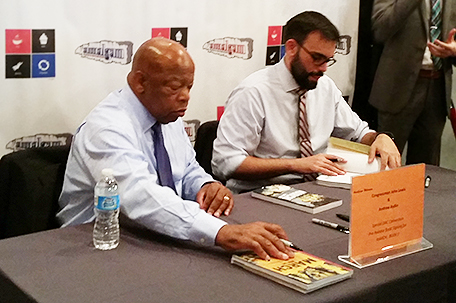 Here at the Democratic National Convention, Rep. John Lewis of Georgia is a pretty popular guy.

He’s a leader in the Congressional Black Caucus. He recently led a sit-in on the floor of the House of Representatives to demand responsible gun laws. He’s also been called the conscious of the Congress because of his work in the Civil Rights Movement.

But the people in the line forming on the inside of the Amalgam Comics and Coffeehouse in Kensington on Wednesday were there as much for Lewis’s accomplishments as a statesman as they were for an accomplishment that no one thought would happen eight years ago: star of an award-winning graphic novel.

Lewis and co-creator Andrew Aydin were at Amalgam to sign copies of the third and final chapter of the graphic novel “March: Book Three”, which tells the story of the Voting Rights March from Selma to Montgomery, Alabama through the eyes of a young Lewis and his fellow members of the Student Nonviolent Coordinating Committee.

The graphic novel series, which was created by Lewis, Aydin and artist Nate Powell, has won several awards including the Eisner Award and was the first graphic novel to win the Robert F. Kennedy Book Award.

While “March: Book Three” won’t actually be released until August 2, Lewis decided to come to the comic book store and coffeehouse to showcase the new work, said Arielle Johnson, owner of Amalgam Comics.

An avuncular Lewis — the youngest and last surviving keynote speaker at the 1963 March on Washington — captivated the crowd by sharing stories of his life in the Civil Rights Movement. He talked about the challenges of doing what he did, and why the perseverance of himself and people like the Rev. Dr. Martin Luther King and Rosa Parks is still something that’s needed today.

“We titled the book “March” because we did a lot of that, picking them up and putting them down,” Lewis said. “We didn’t just march on Washington, we also marched from Selma to Montgomery for the right to vote. We were beaten and bloodied, but we didn’t give up. We kept our eyes on the prize.”

Aydin, one of Lewis’s congressional aides, came to the Congressman with the idea of turning the stories that he had told him about his life in the Civil Rights Movement into a graphic novel after visiting the DragonCon comic book conference. He had found out about a comic book co-edited by the Rev. Dr. Martin Luther King that played a role in the Civil Rights Movement.

“I asked him to write a comic book and he said he’d do it under one condition: I had to write it with him,” Aydin said.

Aydin took the idea to Top Shelf Productions, a publishing house that focuses on more artistic works. While the production house had started projects with celebrities before, they didn’t always work out, said Leigh Walton, a spokesman for Top Shelf.

But when Aydin sent Top Shelf a script, it told the compelling story that is Lewis’s life in such a way that readers would flock to it, Walton said.

“This was a team effort,” he said. “March’ is something special, a powerful and emotional look inside the heads of the young people involved in SNCC and the consequences of what they were doing.”

When the first chapter of “March” was released in 2013, it was around the time of the 50th anniversary of the March on Washington. Lewis decided that he wanted to go to San Diego’s iconic comic convention, ComicCon.

Cosplaying — or dressing up as your favorite character — is a major part of ComicCon, so Lewis decided to try it. He dressed up in the outfit he wore on the day he participated in the Voting Rights March from Selma To Montgomery, an outfit that included a tan trench coat and a black backpack, then walked around ComicCon, a trail of eager comic fans following him.

Lewis and Aydin signed copies of “March”, took pictures and chatted with a group of supporters at Amalgam for at least an hour. Among those waiting for her turn with the Congressman was Rebecca Cerese, a documentary filmmaker who is currently using animation to tell a similar story.

That “March” is now being used in the New York City schools and in other places as a way to tell these stories of the Civil Rights Movement is significant, Cerese said.

“John Lewis is one of my personal heroes,” she said. “One of the reasons that our young people don’t understand their history is because of how it’s taught, which is kind of dry. Books like this help.”

Copies of “March: Books One,Two and Three,” are available at Amalgam Comics and Coffeehouse, 2578 Frankford Ave.

50 years later, focus on jobs minimized in memories of March on Washington