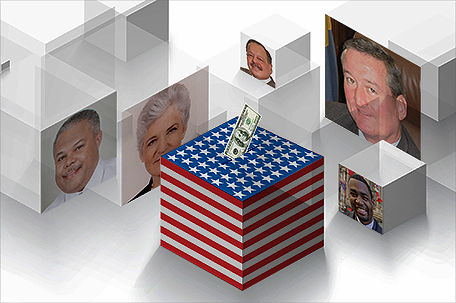 Don’t embarrass yourself this Tuesday. Please…please…don’t replicate what they did last month in Ferguson, Missouri. GO TO THE POLLS May 19, 2015 and VOTE! Turnout has been predicted to be around one-third of eligible voters, which many would accept as a success. The Philadelphia SUN believes Philadelphians can do better, so we’ll just keep on “keepin’ the faith” in our folk.

On page 47 of this edition, you’ll find the SUN’s recommended candidates on our sample ballot. We produced the sample ballot in its entirety in order that voters would not be stymied by the sheer number of candidates they’ll find in their respective polling places. TAKE YOUR TIME. YES…THERE ARE A LOT OF CANDIDATES THIS YEAR.

This is due to the unusually large number of judicial vacancies because of retirements, resignations,  deaths and legal interventions. AND, YES the judicial candidates appear on “top” of the candidates for mayor and city council. THAT’S THE STATE LAW!

In the six-way contest for the city’s next Mayor, the SUN is supporting ANTHONY HARDY WILLIAMS, (Button #66) who has served in the State Senate for the past 23 years and who has championed the cause of education reform, even though his position has oftentimes put him at odds with many in his traditional political base, namely the unions.

Our principal reason for supporting Williams is because we believe he has the special commitment to address the overriding problem of poverty within the African American community—the deadly and intractable socio-economic disease which infects fully one- third of our families.

For City Council at Large, the SUN supports veterans BLONDELL REYNOLDS BROWN (Button #90) and W. WILSON GOODE, Jr. (Button #99) because their work and dedication on the issues of economic equality, public education and job creation has been exemplary. For the remaining three slots we recommend newcomers DEREK S. GREEN (Button #84); HELEN GYM (Button #95) and ISAIAH THOMAS (Button #98) because based on their track records as community leaders all three are sure to, thankfully, shake things up.

Further down on your ballot you’ll find the row offices of Sheriff, Register of Wills and City Commissioner.

The SUN hopes you’ll pay particular attention this year to the contest of City Commissioner, since we have a chance to replace an incumbent who has not had the decency to vote for the past five years, even while he was being paid to supervise the city’s election laws and voter registration machinery. It’s embarrassing to talk about this too loudly. The SUN supports two new faces for City Commissioner, TRACEY L. GORDON (Button #75) and OMAR SABIR (Button #79), because both have promised to keep civic engagement paramount.

Regrettably, last month in Ferguson, Missouri when all the votes were counted following weeks of turmoil and upheaval in the aftermath of the police killing of an unarmed Michael Brown,18, less than one-third of the eligible voters had bothered to show up at the polls their most recent municipal election. There is no excuse for civic disengagement—only despair. The SUN believes Philadelphia’s history of civic pride won’t allow us to succumb to such dysphoria. Come Wednesday morning, let us show the world that Philadelphia “will have fought the good fight, has finished the race and Kept The Faith!” (2nd Timothy; 4th verse).