Selma to Iran… from triumph to tragedy in a flash 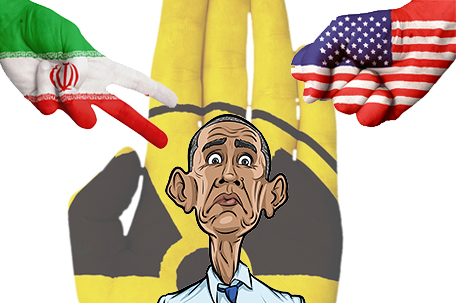 Why does it keep happening?

Just when most of us are feeling good about President Barack Obama and the way he can command the field when he puts his mind to it, oops…something interrupts his message and he is made to look a lot less presidential than he has right to be.

What’s the fuss about this time? The nuclear disarmament talks with Iran, that’s what!

In other words, world peace.

Last Saturday, under a brilliant sunny Alabama sky, President Obama captivated the nation’s attention with a moving and historic speech at the site of one of the most searing days of the civil rights movement, reflecting on how far the nation had evolved toward a more perfect union but also on how far it still has to go. In his panegyric to those brave enough to cross the Edmund Pettus Bridge 50 years ago in the face of violent defenders of Jim Crow segregation, President Obama delivered a message that both uplifted and challenged his national audience. He combined hope and pride in a way that saluted the New South without blaspheming the Old South.

But, in less than a fortnight, his demureness in the face of a major foreign policy controversy lead by the Republican majority in the U.S. Senate had all but erased any of Selma’s afterglow.

The ‘what’ in this case was last week’s publication of a letter from 47 GOP U.S. Senators severely criticizing the Obama administration’s negotiating strategy to keep Iran from building a nuclear weapon.

The letter, addressed to Iran’s hardline leadership, essentially told Iran any deal cut with Mr. Obama’s White House needed congressional approval to be taken seriously. Coming in the midst of the most delicate stage of the negotiating process, the letter is certainly unprecedented and was seen by most rational foreign policy experts as an unwise public relations nightmare at the very least.

Furthermore, in addition to disrupting a precarious process that involves a network of other nuclear armed superpowers, the letter also belittled the presidency since its most basic imprint was to publicly diminish the power of the White House to set foreign policy. Thus, it was an embarrassing rebuke of our own constitutional division of powers.

Several GOP White House hopefuls added their names to the list by week’s end further insuring that the international audience was getting a glimpse of just how truly dysfunctional Washington had become.

Vice President Joe Biden did weigh in with a scathing denunciation of the letter and the motive of its author, freshman Senator Tom Cotton of Arkansas who just a few months ago was completing his tour of duty in Afghanistan.

However, it would have been wiser for the White House to organize responses from Democratic and Republican foreign affairs professionals so that the recklessness of the Cotton’s leadership could have been dramatically portrayed to the entire world. And once a few dozen highly respected voices like a Colin Powell or a Brent Snowcroft had been carefully circulated, President Obama could feel free to lower the boom directly on this latest attack on his presidential leadership.

Lack of respect for this president has been an issue from the very earliest hours of his first inauguration when several top Republicans plotted how to keep him from winning a second term. This was followed a few weeks later when a congressman shouted out that Obama was a “liar” during his first State of the Union address. Such bad behavior was embarrassing then. Now, because it’s been allowed to fester, it’s become dangerous on a worldwide scale.