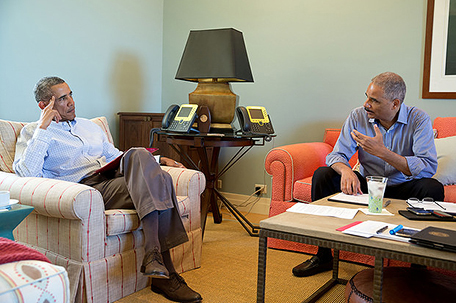 [Ed. Note:  For each week this month in the memory of SUN Publisher and Founder J. Whyatt Mondesire, we will feature some of Jerry’s Freedom Quest commentaries; providing his unique and provocative opinions on subjects from politics to entertainment.]

When Mr. Obama won his first national election, many black people celebrated copiously and wept with unrestrained joy. On the other hand, many well-intentioned (if not misguided) white folks immediately started talking on television about a grand transformative epoch and celebrating what they called the “end of racial politics.” And judging by his own super cautionary approach to acute racial incidents early in his first term in the White House, perhaps even the new president himself thought a new era was about in the offing.

But then one of his former Harvard buddies, a bespectacled professor with a goatee and a cane got roughed up outside his own front door by the Boston police. A short while later, a coarse and crude white Congressman shouted out “Liar!” during a State of the Union address. And, of course, who will ever forget the brutal murder of Trayvon Martin, killed while walking home in Florida armed with a bag of skittles and a soft drink.

Through all of these racially coated incidents President Barack Obama has remained stuck in neutral; seemingly incapable of pushing the public debate up a few decibels so as to expose the raw underbelly of racial animus into the full light of an open discussion where for the first time a man of color would have thelast word.

In the past, when Presidents Abraham Lincoln, Dwight D. Eisenhower, John F. Kennedy or Lyndon Johnson picked the racial burden while they occupied the White House, their words were morally correct for the most part and they certainly did advance the path to progress, even if it were only an inch at time in some instances.

So, now that African Americans had indeed lived to see of one of our own in this seat of ultimate power are we wrong to expect more than lip service to racial harmony or homilies to a distant future where the color of a person’s skin really wouldn’t define his or her character?

Without stooping to calls for revenge for centuries of slavery and oppression are African Americans not entitled to expect the first Black president to stand up to the horrors of then and now by at least calling them out when the blood of a Black boy not much older than his own first bom is flowing the in the streets of a modern American city? Is he not moved by the sight of tanks and automatic weapons unsheathed in a stand-off with a rag tag group of demonstrators armed with little more than big mouthsand water bottles?

Surely, only a black man with Obama’s kind of personal temperament and almost non-existent track record on racial matters could have been elected president of a mostly white country; that much the African American masses surely understand. But what is starting to mystify more of them each day is why, when he has no more campaigns to look forward to, does he it find so difficult to call out the inherent unfairness that still frames so many chances and choices of today’s black youth.

His educational/economic stimulus effort to assist young black and brown males, “My Brother’s Keeper Program,” certainly is well intentioned. But it too lacks the passion and fury needed to burn away the years of degradation, doubt and social disease that has placed so many young men of color in harm’s way.

A few years ago when Attorney General Eric Holder addressed a major civil rights convention he opened with the line: “This is one brother who brings you greetings from another brother in the White House.”

The mostly black crowd roared its approval, even if most of them didn’t believe it. At least the man has style. And he knew his audience.