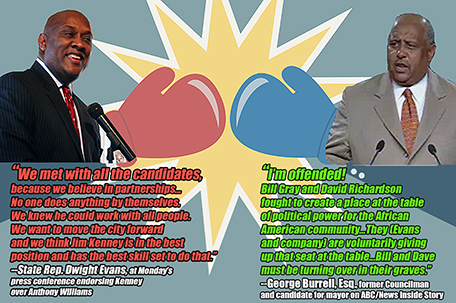 Gone are the polite, velvet-gloved tit-for-tat exchanges from genteel opponents. Now that a group of lawmakers from the city’s Northwest section announced their decision to endorse former City Councilman Jim Kenney in his quest to become Mayor of Philadelphia at a press conference held at the Relish restaurant on Monday, the battlefield has been shrunken radically and the ammo is about to come out.

While it probably won’t rival the drama of the “Thrilla in Manila,” the endorsement has turned the Mayor’s race into a rumble for the soul of Black Philadelphia, thus making who actually wins the Democratic Primary on May 19 a small part of a much larger story.

That’s because the five Black elected officials risked supporting a White candidate to win a Democratic Party (that’s mostly African American) election will also seal their place in the cockpit or the outhouse as to who actually “controls” the Black vote. The risk is real because Black voters, like all Americans, can be fickle. Black officeholders have oftentimes endorsed candidates who were abandoned at the polls by the rank and file.

Just ask the man who seven years ago challenged Mayor Michael Nutter. That candidate launched with dozens of major political figures, clergymen and civic activists, while Nutter couldn’t muster a high-five from a single colleague among his 16 fellow members of City Council where he had served nearly two decades.  That candidate came in dead last. His name: Dwight Evans, the man, who by the way, was the ringleader of last Monday’s historic press conference.

Talk radio turns funky Within the African American neighborhoods of North, West, Northwest and South Philadelphia, the mayor’s race has already begun to come down to a tight slugfest between two of the six people vying for the nod: Kenney and State Sen. Anthony Hardy Williams. The other two Black candidates, former Sen. T. Milton Street (more about him later) and former Philadelphia Gas Works Vice-President for Communications Doug Oliver don’t have enough real money, labor union support or access to TV commercials to mount a serious challenge. Outside of Latino neighborhoods, former Common Pleas Court Judge Nelson Diaz is all but unknown and former District Attorney Lynne Abraham is about as welcome above Girard Avenue as the former police chief of Ferguson, Missouri will be at next year’s Kwanzaa Festival.

So, when this group of prominent Black elected officials—a group that also included City Councilpersons Marian Tasco and Cindy Bass, State Reps. Cherelle Parker and Stephen Kinsey–publicly endorsed the leading White candidate in the May 19th Democratic Primary over his most serious Black opponent, many other African American officeholders, activists and just plain voters exploded with outrage. A few even howled sentiments of betrayal at those who would advocate halting the growth of Black Political power. On Monday, the call-in lines on Black talk radio, which here in Philly means 900AM WURD, were choked with callers demeaning the names of Evans and Tasco for leading Parker, Kinsey and Bass to the podium at Relish to anoint Kenney as the “future voice of Black Philadelphia” according to Tuesday’s Philadelphia Daily News.

“Horrible,” said Paula Peebles, local leader of the National Action Network, emphasized when she called in. “It’s pretty sad” to have to listen to them do what they did today, she added, as she continued to work on plans to send volunteers for Williams into the areas represented by the so-called  “Northwest Five”.

Like many of WURD’s callers, Peebles rejected the Evans-Tasco “he cares for all people” crown awarded to Kenney because they believed as mayor he would safeguard the rights and hopes of African Americans based on his 23 years of service in City Council where he had shown “a good heart” and the ability to “work with all people.” Bass went further, calling the one-time Mummer and South Philly row-house denizen her “mentor,” and exclaiming he was the “right person for the right job, right now!”

At least one of Bass’s predecessors angrily disagreed. “I am offended,” snapped an obviously irate George Burrell, who dropped his usually conciliatory demeanor on 6ABC’s “Inside Story” on Sunday to register his outrage. Burrell, who served in Council before quitting to run for mayor in 1991, invoked the legacy of the 30-year struggle to increase Black political power in Philadelphia when he called Monday’s endorsements a “mistake” disturbing enough to cause the late Cong. William H. Gray, III and State Rep. David P. Richardson “to turn over in their graves.”

“These seasoned veterans, who got where they are through the blood, sweat and tears of their African American predecessors, should not be voluntarily giving up that seat at the table,” Burrell said. Within a few hours of Monday’s announcement, many of those close to the Williams campaign like the African American leaders at Laborers’ Local 332 and others were finalizing plans to “take it to the streets” with door-to-door canvassing, weekend motorcades and even a second press conference, this time made up of committee people, elected officials, religious leaders and activists from the same environs represented by Evans, Tasco, et al.

Those Northwest neighborhoods who elected the Evans-Tasco clique are what elevates this rumble. They constitute the very core of the city’s independent-voting Black storehouse of votes. Tasco, who leads the 50th Ward and Evans, who leads the 10th Ward, hold sway over nearly 35,000 African American registered households, many of whom are what political observers call “super-voters,” meaning they vote in primaries regularly, not just during presidential years. The leader of Mt. Airy’s 22nd Ward also attended Monday’s breakfast announcement. Assuming he remains loyal, his ward would give the Evans-Tasco faction another 15,000 votes potentially.

Even while many West Philadelphians like the late Sen. Hardy Williams (Anthony’s father) often chafed at the mere mention of the political power of Mt. Airy, Oak Lane and Germantown, the Northwest has provided the muscle behind the growth of Black political empowerment separate from the White-dominated Democratic City Machine over the past 30 years. Elected officials including John F. White, Jr., Richardson, the late Augusta Clark, former Democratic Congresswoman Allyson Schwartz, John Myers and Gray all benefitted from the votes from these middle and working class households. These families were also the bedrock of W. Wilson Goode’s historic election as the city’s first African American mayor in 1983. Many others Black elected officials from different neighborhoods later won elected office with the dollars and expertise the Northwest trailblazers volunteered to give them. During this period, unity among these elected officials and ward leaders remained strong as they successfully supported various causes and candidates for other citywide or statewide elections, giving the Northwest a kind of unofficial primal position on the food chain of Black political power.

Even after Richardson’s untimely death 20 years ago and Gray’s abrupt departure from Congress in 1991, anyone seeking citywide office would always check to see where the Northwest was leaning. Monday’s break from this tradition has to be understood in this context then in order for its wider implications to be assessed. “I’ve been a nationalist all my life,” intoned John Myers last week as he reflected upon watching some of his closest political allies announce support for a candidate for mayor “against a prominent African American, whose family has been part of the historic independent black political movement.”

Myers, who succeeded Richardson in the statehouse to represent Germantown, said, “What kind of message are we sending to the next generation of our people? I love Dwight. I don’t have any problem with him trying to build a political power base. But that doesn’t mean we should sit by and let them take those younger people with him and Tasco that leaves the rest of our people on the outside.” Myers added that his private conversation with the man who succeeded him–Rep. Stephen Kinsey–was even more directly tied to the sacrifices endured by Richardson and others. “I can’t ever let him forget what it took for us to achieve.”

Ghost of “Johnny Doc’ Lurking in the background of Monday’s epochal announcement is the apprehension many African American political activists have regarding Kenney’s chief labor supporter, electrician’s union boss John Dougherty, known affectionately and (un-affectionately) as “Johnny Doc.” To many, the fact that a future mayor could be so closely aligned with someone who is used to doing things his own way and has the capital to orchestrate his political will has them skeptical that African Americans will continue to have access to the few political spoils still available. Further worry comes also from the less than stellar history Dougherty’s union has for including non-whites and women among its ranks. This doesn’t mean that Dougherty is not welcomed in Black churches or banquets and the like. His union often is the first to send a check (a sizable one most times) whenever a solicitation is received at I.B.E. W. Local 98 headquarters on Spring Garden Street.

But with Dougherty’s brother, Common Pleas Judge Kevin Dougherty vying for a spot on the state’s all powerful Supreme Court on May 19, will Johnny Doc finally be satisfied that he has enough power or will he want still more?

“That’s what I’m talking about,” gasped a beleaguered John Myers. “He’s soon going to be king of Philadelphia. With the mayor also one of his people; what does he want to be king of all Pennsylvania? What about our folks. Who will be looking out for us?”

The “Street factor” While Monday’s surprise announcement dominated the political dispatches through the week, another equally important development occurred which has the potential to play havoc with May Primary’s eventual outcome.

T. Milton Street, the former Senator and convicted tax cheat, was sued in Commonwealth Court to have his name removed from the ballot over allegations that he lied about his party’s registration status prior to the deadline. Street, the eternal king of political highjinks, previously survived this challenge in Common Pleas Court, but now faces a tougher legal hurdle against opponents who have filed a strongly documented appeal.

But because of the notoriously dawdling pace maintained by our state’s judicial system, a final ruling could be held up by the Supreme Court until possibly early May.

This would mean Street could be a spoiler should the race become a tight contest between Williams and Kenney. Goofy or not; outlandish public pronouncements aside–Street continues to be able to nurture a constituency even as he approaches 80. The Williams camp has to be concerned when they recall Street took nearly 24 percent of the Black vote when he challenged Mayor Michael Nutter four years ago

Should he survive this latest ballot challenge, the stage would be set indeed for an ironic finish: Street turns out to be the spoiler who not only hands a close race to Kenney, but he also ends up resurrecting the political fortunes of Evans-Tasco clique–opponents he has dueled for more than 30 years.

Who wins the actual primary election is now just part of a bigger story. That’s because the five black elected officials who chose to risk supporting a white candidate to win a Democratic Party (that’s more than half African American) election will also seal their place in the cockpit or the outhouse as to who actually “controls” the black vote.

Several well known leaders who have close personal relationships with both Evans and Tasco have privately speculated that at least a part of the motivation for Monday’s endorsement of Kenney is rooted more in personal political feuds with Williams than with other issues.