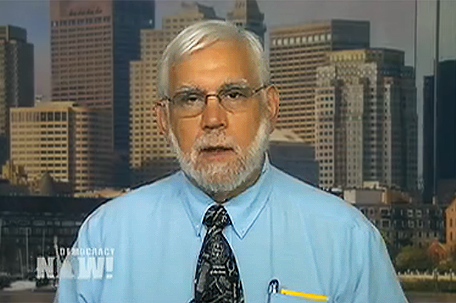 Unraveling international news has never been easy. Foreign wars are especially hard to grasp since once the shooting starts, truth is always the first casualty. So it is with the current torrent of news stories about the latest conflicts in the Middle East, where thousands of people have been killed in recent weeks and the coverage by American journalistic franchises continues to regurgitate their usual stereotypical reports. Recently, the Philadelphia SUN was pleased to catch a few stories on a public radio news program called Democracy Now! We commend them to your attention in order that you might find a more balanced portrayal of the actual events in that region.

Part two of our interview with acclaimed MIT physicist Theodore Postol, who says there is no evidence Israel’s Iron Dome missile defense system is actually working. He estimates the Iron Dome, which is partially built by Raytheon, intercepts just 5 percent of rockets fired at Israel.

A Venerable Jewish Voice for Peace

By Amy Goodman with Denis Moynihan

The Israeli assault on the Palestinian people in the Gaza Strip has entered its fourth week. Henry Siegman, a venerable dean of American Jewish thought and president of the U.S./Middle East Project, sat down for an interview with the Democracy Now! news hour. An ordained rabbi, Siegman is the former executive director of the American Jewish Congress and former executive head of the Synagogue Council of America, two of the major, mainstream Jewish organizations in the United States. He says the Israeli occupation of the Palestinian territories must end. 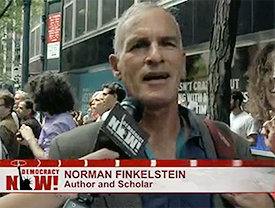 In New York City, a group of demonstrators blocked traffic by laying down in the streets outside Israel’s Mission to the United Nations on Tuesday. Twenty-six people were arrested after refusing police orders to disperse. The action was organized by the author and scholar Norman Finkelstein.

Overcoming the Media Blockade in Gaza

By Amy Goodman with Denis Moynihan

One of the greatest challenges in understanding the situation in Israel and the occupied Palestinian territories is getting reliable information. This latest assault on Gaza reaffirms the key role played by the U.S. media in maintaining the information blockade. It also highlights the increasing importance of pressure applied by social networks.