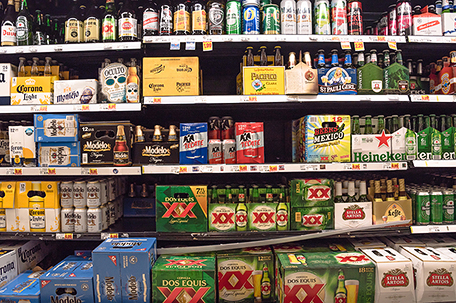 [Ed. Note:  This month the SUN celebrates the memory of our SUN Publisher and Founder J. Whyatt Mondesire. We will feature some of Jerry’s FreedomQuest commentaries; providing his unique and provocative opinions on subjects from politics to entertainment.]

A generation ago before Hollywood surrendered its creativity to comic strip heroes there was a well-scripted satire, ‘Network’ , about the television news business that featured an emotionally exhausted anchorman who told viewers to go a window and shout…“I’m as mad as hell…and I don’t have to take it anymore!”

That catch phrase from ‘Network’ could very easily sum up how many Philadelphians feel about the “nuisance” take-out delis and bars which sell beer and malt beverages throughout the city. Sadly, too many “off-premise” beer retailers don’t care how their trade pollutes the surrounding neighborhood.

Many neighborhoods live in fear of these “nuisance” delis and bars because of the alcohol-soaked creeps, drug dealers and oftentimes violent felons who congregate around these establishments preying on young women, senior citizens and law abiding citizens who must pass by on their way to school, work, church or public transportation.

This is not a blanket condemnation against all take-out beer joints. Here, we’re discriminating against those several dozen take-out joints that specialize in selling beer to minors, allow drunken patrons to urinate near their back or side doors, sell blunts knowing full well that the teens and pre-teens will use them to light up pot or other illegal drugs and especially those stores that allow prostitutes to openly sell their services in or near their stacks of six-packs.

If your neighborhood is suffering with this kind of off-premise outlet, you really don’t have to take it anymore. A group of city council members; their staffs, a veteran civil rights group and one of the city’s top law firms are already mad as hell and they’ve teamed up this summer to do something about such nuisances.

Act 155 gives the city 90 days to approve or disapprove an application for a permit for off premises sales, which means that most smart beer and malt retailers will file in July so that in the event of a protest of their establishment, everything can be resolved by Halloween and there can be a seamless transition of the permit.

Enter the Malt and Brewed Beverage Hearing Board.

This new operational arm of the city’s Law Department will process all applications for any take-out operation anywhere in the city. Set up formally last month, neighborhood groups, town watch activists, city council members and anyone who resides within 300 feet of a take-out operation has the right to file a protest within 21 days of the applicant’s filing.

Neighbors will know if a store is seeking a new permit by the green neon poster that must be posted in the store’s window.

And, for the first time since City Council first tried unsuccessfully to address this quality of life issue two years ago, there are some new players in the game on the side of the neighbors.

The NAACP Philadelphia Branch has joined with City Council’s leaders, President Anna Verna and Majority Leader Marian Tasco, to help spread the word throughout churches, community associations and town watch groups that this new law is in effect.

But perhaps even more important, the NAACP persuaded the highly regarded law firm of Blank, Rome to provide pro bono legal assistance to those neighborhood groups who plan to file protests before the Malt and Brewed Beverage Hearing Board.

Neighborhood groups now have high quality legal help to challenge permits from problem beer sellers, many of whom are able to pay huge sums to lawyers intimately familiar with the arcane state laws governing liquor sales.

Two years ago it was the overwhelming number of victories racked up by these nuisance beer retailers and their high-priced attorneys that left many community groups highly skeptical that anything can be done this time to rid the city of this scourge.

When the first two attempts to stop nuisance take-out establishments ended with court injunctions mandating that every establishment be given a permit for off premises sales of malt and brewed beverages, nearly every community group worth its salt became disgusted with power of Act 155 to really do any good.

Well, in this third set of hearings soon about to begin, City Council, the NAACP and some of the best lawyers in town are on the side of the ordinary citizen in every neighborhood in the city.

The combined resources of these three institutions will finally give average citizens a lot more clout than just shouting from an open window.