Your prayer is already answered 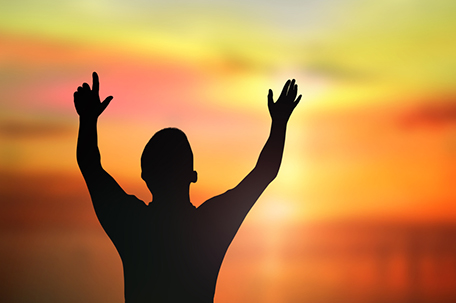 Baked fish isn’t one of his favorite dishes, so he wasn’t too enthused about having to eat it.

Suddenly becoming Mr. Helpful, the little guy suggested suitable alternatives to solve this “problem” of not wanting to consume what was on his plate.

“Oh, I could just eat a peanut butter and jelly sandwich,” he casually suggested, poking the unwanted food with his fork without looking up.

“You have to eat your food,” I said in a sing-song voice, not feeding into our youngest child’s usual antics. For as long as I can remember, he has been quite the picky eater. In fact, there are few non sugar-filled foods he finds delightful.

“When I was growing up, we had to eat whatever was set before us,” I explained.

Truth is, I would have been in big trouble for even expressing my displeasure over what Mom prepared. Dad wasn’t having that. He viewed it as disrespectful. So I had better fake like I liked it!

I have a much more laid back parenting style, but I wasn’t flinching on the menu.

Kaleb had to eat every bite.

Realizing that he had no choice, he came up with his own creative way of making the fish more palatable: smothering it in corn.

As the Hobbs family sat around the table, Kaleb’s incessant complaining was the perfect segue into a conversation about gratefulness. So I explained to him, as millions of parents before me have, that there are people that wish they had food, clean water and the things he takes for granted.

I used that opportunity to help him see that there are real problems in the world.

Not liking baked fish isn’t one of them.

I think he got the message.

About 20 minutes later, a smiling Kaleb held up a clean plate and declared, “Look! I ate all of it.”

Sometimes in life, we behave just like Kaleb. We get so focused on all the things we don’t like. We start complaining about our circumstances.

Of course we often have much greater trials to face. I mean, if not liking dinner was our biggest concern, most of us would be clicking our heels together!

There are serious challenges and rough seasons when we come up against some truly tough circumstances.

But complaining won’t fix it. Praying will.

In Act 12, King Herod, who had it out for Christ’s disciples, had the Apostle Peter thrown in prison.

Though the circumstances were bad, instead of sitting around moaning and grumbling about it, verse 5 says, “the church was earnestly praying to God for him.”

The Bible didn’t say the people of God got together to have a pity party. They didn’t huddle up to vent their frustrations about the unfairness of this persecution.

No, they started interceding. They bombarded heaven, which is what Believers are supposed to do.

You see, when others are found complaining, we are found praying, because complaining does nothing to solve issues, but prayer changes things.

The people of God prayed until the angel of the Lord broke Peter out of prison. The guards Herod appointed to stand watch didn’t even know a jailbreak had happened. In fact, the prayer warriors didn’t even know what was going on.

They just kept on praying with no inclination that their answer was about to come knocking—literally.

When Peter knocked at the outer entrance of the house where everyone was gathered, the Bible says a servant named Rhoda came to answer the door. When she heard Peter’s voice, she was so excited, she ran back to everyone without evening opening the door.

“Peter is at the door!” she shouted.

Here’s the funny thing. These folks who were praying with all their heart, didn’t even believe Rhoda.

“You’re out of your mind,” they told her.

The Bible says, “When she kept insisting that it was so, they said, “’It must be his angel.’”

Looks like they weren’t expecting God to supernaturally give Peter an early release. That turnaround came quicker than they were thinking. The shift in the circumstances was so fast and unexpected, they couldn’t wrap their minds around it.

James, the brother of John, had been killed by Herod. Peter was supposed to be locked up until his time came to stand trial. It couldn’t be him, they thought.

Verse 16 says, “But Peter kept on knocking, and when they opened the door and saw him, they were astonished.”

God is able to astonish you too.

As the saints were praying, before they could even say amen, their answer showed up.

Friend, there are some prayers you have been praying that are already answered. The manifestation is about to show up in your life and it’s going to exceed your expectations.

Others may be telling you, “You’re out of your mind,” just as Rhoda was told. But she wasn’t crazy. It wasn’t a figment of her imagination.

God had showed up, just as He’s about to do for you.

To help you grab hold to this truth, I’m stirring Isaiah 65:24 NIV into your cup of inspiration, which says, “Before they call I will answer; while they are still speaking I will hear.”

As you drink down the contents of your cup, get excited about what’s on its way to you.

What others may doubt is coming to pass.

Your prayer is already answered.

Believe and receive it.

Is your prayer life like a pack of Now and Laters?