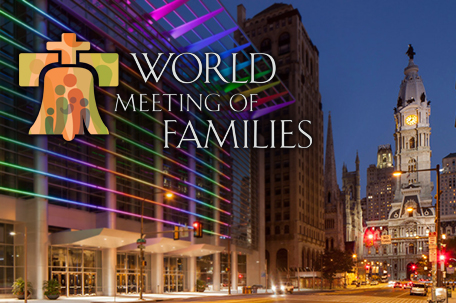 The first segment of the World Meeting of Families – Philadelphia 2015 will take place at the Pennsylvania Convention Center from September 22 through 25. Most events will occur congruent with the activities to take place at the convention center for the Congress. The Center covers more than 2 million square feet and is the 14th largest facility in the nation. It features the largest exhibit space and ballroom in the Northeastern U.S.

Keynote Presentations will receive simultaneous interpretation into several languages, including French, English, Spanish and Italian. Other languages will be added as registration shows a need.

Breakout Sessions: Congress attendees will be able to choose from sessions presented in the primary language of speakers. A select few Breakouts will be simultaneously interpreted or have one of the panelists interpreted.

For a list of all our Adult Congress presenters and Youth Congress activities, go to http://www.worldmeeting2015.org/about-the-event/speakers-2/

–Mass will be celebrated inside the convention center everyday.

–Confession locations will be set up at designated areas in the convention center and times will be announced.

Paint with The City of Philadelphia Mural Arts Program

Add your creative touch to a mural commemorating the Papal Visit.

The World Meeting of Families – Philadelphia 2015, in partnership with The City of Philadelphia Mural Arts Program, have joined hands with renowned muralist Cesar Viveros, to create a hands on opportunity to all congress attendees to help paint portions of this historical mural, entitled The Sacred Now: Faith and Family in the 21st Century, at the convention center will be a 4,239 square feet permanent installation on the face of an elementary school or to learn more about the artist, click here.

Vatican Splendors at the Franklin Institute

Vatican art, history, culture and religion are presented through extraordinary works by masters including Michelangelo, Bernini, Giotto and Guercino, and objects dating back to the first century. From the venerated relics (bone fragments) of Saint Peter and Saint Paul to Michelangelo’s art and tools used in work on the Sistine Chapel, this exhibit comprises one of the largest Vatican collections ever to tour North America. View more.

The World Meeting of Families – Philadelphia 2015 and Greater Philadelphia Film Office (GPFO) formally announced the World Meeting of Families Film Festival, which will open Tuesday, September 22 and close on the evening of Friday, September 25, 2015, just before Pope Francis’ arrival in Philadelphia. Curated by the GPFO and presented by Beneficial Bank, the Film Festival will be held at The Kimmel Center for the Performing Arts, adding to the many cultural and family-friendly events being planned across the Philadelphia region.

Originally exhibited at the Vatican in Rome, Verbum Domini II will showcase more than 80 artifacts from Museum of the Bible’s Green Collection, one of the largest private collections of rare biblical texts and artifacts in the world. The exhibit will encompass 15,000 square feet in eight galleries and 24 display cases in Hall G of the Pennsylvania Convention Center, accessible via the Broad Street Atrium.