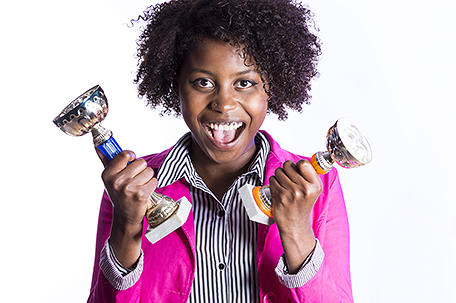 Competition isn’t something we think we encounter daily. And honestly we aren’t racing to an actual goal every day. However, competition is very much a part of our lives. As a child it was common to foot race a friend outside. You also competed in games and other sports on daily basis as child. Yet as adult we don’t always call many things what they are…a competition. For example we go in for a job and we call it an interview…but isn’t it really a competition?

Let’s look a little more an interviews since it’s the most common thing we all share as adults. You find a great job online. You sent in your resume hoping that you get a call about the job. You get a call from someone in human resources saying you were selected for an interview. You show up for the interview…ready! You’ve got your nice outfit on and you’re ready to answer all kinds of questions and you’re hoping you are knocking their socks off. You leave feeling good and now you sit at home…waiting on the phone to ring to say, “You got the job.”

We tend not to view an interview as a competition…but it is on a few levels. First, your resume gets seen. Second, your resume beats out many others to receive and interview call. Third you compete for the actual job! The victory is that you get the job…you are then the WINNER.  In perfect world it works just like that…1, 2, 3 hired. But we know it isn’t that simple. I’ve had interviews where they showed me where my seat is…introduced me to folks on the floor…I all but met the janitor! Alas, I never got the call for the job that seemed like that had all but offered me right there on the spot. I often felt the sting of disappointment. High hopes…and losses.

There are some people who have a “shoe-in”. They know someone down at the company who will bring them right in with a job. The top of this type of “sure thing” to me is someone who has a relative who works there and can hire them the term for this is…nepotism.

Nepotism is defined as the practice among those with power or influence of favoring relatives or friends, especially by giving them jobs. Although the definition speaks of giving jobs to family or friends the word is most often applied to family…and this is what we will focus one.

Imagine having your father as the CEO of some large successful company. Imagine knowing that one day you will sit at the head of this company…you are a “shoe in” to be CEO…the owner. How comforting it is to know you will never have to compete for a job in the company…your last name is on the building! Everyone knows who you are and where you are going. They know that success is automatic for you. To some people you were born a Winner.

So most of us don’t have our Father in the physical realm as the CEO some successful company. Nevertheless, I am here to declare that we are even more connected than that. We are “shoe-ins” for greatness. Our name is on the “building”. We are known in the right circle. We were born as Winners!

At this point you asking how that is possible? Romans 8:17 says, “Now if we are children, then we are heirs-heirs of God and co-heirs with Christ, if indeed we share in his sufferings in order that we may also share in his glory.” We are heirs! We are in the family of God and therefore we have an inheritance. Our father is rich and so are we according to Psalm 50:10…that God owns a cattle on a thousand hills. The earth is the Lords and the fullness thereof (Psalm 24:1)…we are connected to that greatness. We are more than conquers (Romans 8:37). We are walking and talking winners. This is nepotism at the highest level. We know the right person to call on…God. You’ve already been declared a winner, promoted, elevated…a champion. Promotion comes from God (Psalms 75:6-7) and you are his child therefore promotion is yours!

Today you may be saying, I don’t feel like a winner but I want to. You can become an heir today by saying the following:  Dear Jesus, I know I have sinned against you. I confess that I am a sinner. I accept the sacrifice you made on the cross on my behalf. I ask you to come into my heart. Please cleanse me of my sin. I repent from my sins and put my trust in You. Thank you, Jesus.  Amen.

Randal Pinkett–“You’re hired!” A chat with the only African American winner of “The Apprentice”