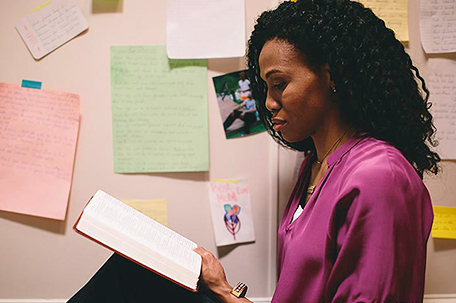 In 2011, Pastor Alex Kendrick produced, directed, wrote and starred in Courageous, a very compelling, action-oriented, faith-based drama. With War Room, he’s opted to play only a supporting role in the flick, thereby freeing himself to focus more on his duties behind the camera.

The film revolves around protagonists Elizabeth (Priscilla Shirer) and Tony Jordan (T.C. Stallings), a couple we meet already in the midst of a relationship crisis. Most of their marital woes are of the husband’s making, as he is a workaholic who’s emotionally and physically unavailable to his wife and their young daughter, Danielle (Alena Pitts).

And that’s just the tip of the iceberg, since terribly-flawed Tony proceeds to put both his job and marriage in jeopardy by embezzling funds from his company and dating a colleague when he’s away on business. Nevertheless, the lout should thank his lucky stars that instead of leaving him, realtor Liz heeds the advice of Miss Clara (Karen Abercrombie), a sage, elderly client of hers.

Clara is a Christian who believes in the power of prayer. Furthermore, she suggests that Liz ought to love and respect rather than try to fix her philandering hubby. Together, they come up with a “battle plan” to resurrect the relationship, which helps explain the picture’s militaristic-sounding title.

In this critic’s opinion, War Room is a movie that’s way too heavy-handed in its treatment of the material to find much of a mainstream following. That’s too bad, since the modern morality play could’ve just as effectively delivered its valuable message without wearing religion on its sleeve.

Consequently, its appeal is apt to be pretty much limited to Evangelicals with an appetite for incessant sermonizing. This represents an unfortunate step backwards for Pastor Kendrick who had previously demonstrated an uncanny ability to serve up Jesus fare ever so subtly.

A prayer-ordained, prodigal husband parable preaching primarily to the choir!