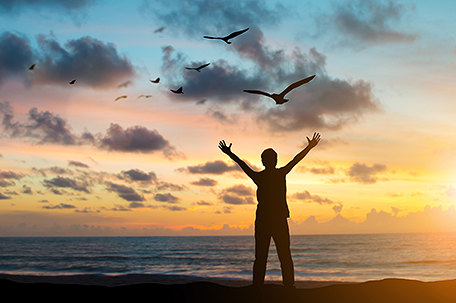 I cried out in my brokenness. I sobbed until I could hardly breathe. It was a rough season and I didn’t know how the Lord would bring me out. I had no idea when He would work things out in my favor.

I was stuck in my “meantime” experience. I was in that between-time space, where nothing seemed to be going right, despite my determination to speak and believe the word of God.

And breaking down, and crying out in His presence when it all gets to be too much.

If so, I know where you are.

I was there that day, laid out, wailing.

On this particular day, however, I didn’t ask God to fix it. I didn’t request that He change things.

I had before, but not that day.

You know what I did instead?

I praised Him right in the midst of that trial. As I was weeping and feeling so weak I could hardly carry on, I glorified Him.

Can I tell you something?

In that moment, I experienced God in a new way, as I never had before. His presence saturated me right on that floor. I was engulfed, arrested, overcome, overtaken.

I don’t really have the words.

His Spirit swept over me mightily in my place of brokenness. It was a beautiful thing to bless the Lord in that valley. The circumstances weren’t ideal, but His presence was heavenly.

Friend, at times, we all find ourselves in a low place, hoping and praying for a way out. But the answers and the manifestation don’t come right away.

So we have to wait on the Lord. That’s inevitable. We have no control over the wait.

But what we can control is what we do while we wait.

1 Thessalonians 5:18 says, “In everything give thanks, for this is the will of God in Christ Jesus concerning you.” David said in Psalm 34:1, “I will bless the Lord at all times: his praise shall continually be in my mouth.”

I love this psalm I just mentioned, especially because of what David was going through when he wrote it.

If you open your Bible, you’ll notice that, right before this particular passage begins, the word of God says, “Of David, when he changed his behavior before Abimelech, so that he drove him out, and he went away.”

So, what does that sentence mean?

Well, unlike some psalms that do not clearly indicate when they were written, there are others that explain the exact context and time period. Psalm 34 is one of them. To fully grasp the richness of the text, you have to trace it all the way back to 1 Samuel 21 when David was on the run, trying to preserve his life as jealous King Saul sought to kill him.

When we enter the story, David was desperate for food and protection, so he went to a place called Nob. Once there, he asked Abimelech the priest to allow him to eat the holy bread (also known as the “shewbread” or “Bread of Presence”) that was set aside as a sacrifice to God.

For his own safety, he also asked Abimelech to give him the sword he used to kill Goliath that was stored as a sacred national possession of Israel.

The priest complied with both requests.

But after David left and went to Achish, the king of Gath, one of the king’s servants recognized the revered warrior, which terrified David! To conceal his identity, the Bible says in 1 Samuel 21:13 that he changed his behavior and pretended to be crazy.

How did he accomplish this?

David started scratching on the doors of the city gate while letting saliva run down his beard.

This man, whom God promised to make a king someday, was relegated to the wilderness, living in and out of caves, and drooling all over himself to avoid danger.

What a tough time it was for David!

He looked like a wild man, though he was perfectly civilized and anointed to be king of Israel.

David’s plan worked. King Achish thought he was a certifiable nutcase. So he dismissed David from his presence.

Can you imagine being in that kind of distress, scavenging for food and knowing that a very powerful king, intent on killing you, was pursuing you at every turn?

It was rough  for David carrying around that prophetic word, when everything happening to him seemed to contradict it. Some people would have walked away murmuring. They would have begun questioning God. They would have been complaining nonstop and having an angry fit.

Instead, this worshiper said, “I will bless the Lord at all times and His praise shall continually be in my mouth.” He waited and praised; endured persecution and praised; was under the threat of extermination daily and praised anyhow.

Friend, be like David when you’re going through. Refuse to allow anything to steal your praise. Keep your heart full of gratitude—no matter what, no matter how long the wait.

To help you do that, I’m stirring Psalm 34:1 into your cup of inspiration. I want you to say it and mean it: “I will bless the Lord at all times; his praise shall continually be in my mouth.”

As you drink down the contents of your cup, even though things aren’t perfect and you may have unanswered requests still before the Lord, bless His name while you wait.

In this moment, find a reason to give Him glory. I promise you won’t have to search too hard.

God kept your mind when you were going through enough to lose it. He held you together when everything in your life was falling apart. He encouraged you in the midst of discouraging circumstances. He provided for your needs when your resources had run out. He wrapped you in the cradle of His arms when others forsook you.

Thank Him for those things.

And remember, just as God did in the life of David, He will bring His word to pass in your life.

This Joy I have