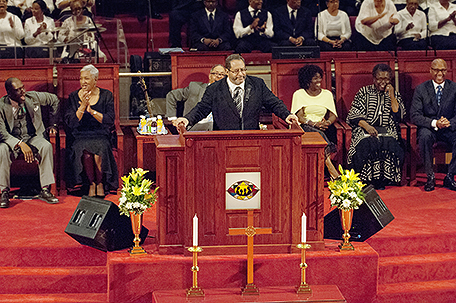 The service opened with the Sam Cooke classic, “A Change Gonna Come” – a 1960s Civil Rights movement anthem, apropos in this year’s tumultuous political climate, where many of the rights earned are being challenged. Around 500 people — including CBC member Rep. Shelia Jackson-Lee (D- Texas) — were in attendance for the service, which featured prayer and inspiring messages. Music selections were offered by the Enon Mass Choir, as well as Brother Charles Butler and his ensemble, Trinity.

Dr. Pierre is one of over 30 African American women on the Clinton campaign staff. She spoke passionately of the importance of voting and challenged those in attendance to encourage at least 10 people to register and participate in November’s election. She urged the congregation to utilize all tools available to them—including their social media networks— to help turn out the vote in what may be the most consequential election of the 21st century. 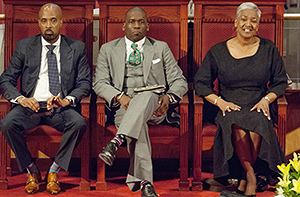 Keynote speakers Dr. Michael Eric Dyson, Rev. Dr. Cynthia Hale, Rev. Dr. Jamal Bryant and Dr. Freddie Haynes all electrified the program with messages that placed a strong emphasis on what is most at stake in this year’s election. Some of the topics covered were mass incarceration, education, voter suppression, and all in attendance were admonished to become more invested in the political process. The challenges to civil rights, the African American community and the country as a whole presented by Republican Party nominee, Donald J. Trump and responses to those challenges were also a main focal point.

The song, ‘We Shall Overcome’, closed out the uplifting program, as delegates, parishioners and officials grasped hands, swaying to and fro as they sang, a tradition that began at the height of the civil rights movement of the 1960s.

Our Values, Our Voice, Our Votes and One Vote