United Methodist Church to offer the gift of hospitality; a warm welcome can happen anywhere… and so can church, Dec 15-18 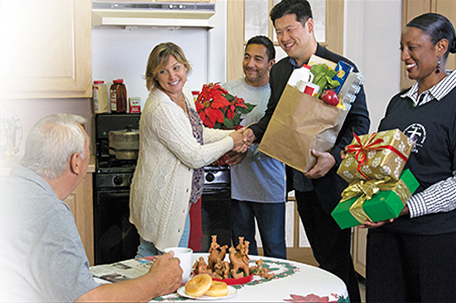 If you see people wearing what looks like a bright red jetpack and walking around some of our city’s most popular destinations December 15-18, you might want to head over. They’re actually bearing gifts: tasty cups of hot cocoa dispensed from state-of-the-art backpack drink dispensers.

The United Methodist Church is taking to the streets of Philadelphia to offer the gift of hospitality this Christmas season with a warm invitation and a hot cup of cocoa. As commuters, holiday shoppers and eventgoers crowd the city’s most trafficked areas, United Methodists will be amongst them—hoping to warm their stomachs and also their hearts with a Christmas greeting and an invitation to visit any of their Philadelphia-area churches and events.

“We think church can happen anywhere–and so can hospitality,” says Philadelphia Area Bishop Peggy Johnson. “Church is not something that happens just within the walls of a building. It’s a way of life focused on reaching out into our communities to offer hope and love. By taking the church to the city, we hope to help people connect with a local church just in time for Christmas.”

United Methodist churches are opening their doors wide during the holidays, and they invite all to visit not only for worship but also for Christmas dinners, concerts, caroling and other activities. The paper goblets filled with chocolate-y goodness exhort cocoa drinkers to “Rethink Church” and point them to a website – rethinkchurch.org/find-a-church – where they can find local churches in their areas. A mobile billboard cruising the streets will do the same. National advertising will also be running on digital media and cable television. http://www.rethinkchurch.org/find-a-church/search.

Research shows that twice the number of U.S. adults say they are lonely compared to 10 years ago. That’s despite being continually connected more than ever before through texting, Facebook, Twitter, Snapchat etc. The Rev. Christopher J. Kurien, Director of Connectional Ministries for the Eastern Pennsylvania Conference, says they may be missing a deeper, more meaningful kind of community. “Christmas is a time when many people are particularly lonely or feel like something is missing from their lives,” said Kurien. “The United Methodist Church is a place to belong, where you can explore the true meaning of Christmas in community with others.” Here is a map and the schedule for our planned hospitality outreach appearances in Philadelphia, from Thursday, December 15 to Sunday, December 18: