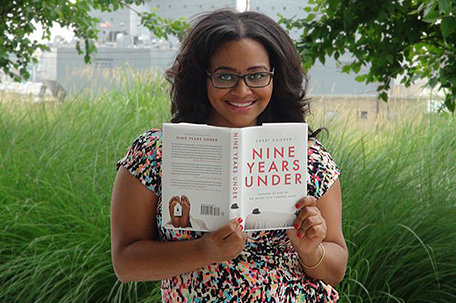 By spending time around death, Sheri Booker learned the importance of life.

In 1997, after the death of a beloved aunt, 15-year-old Sheri Booker became an intern at the Wylie Funeral Home in West Baltimore.

Between HIV/AIDS and gang violence, there was never a shortage of business. It was a place where the dead were memorialized on t-shirts and people would occasionally pour some cognac on the ground for the brothers who aren’t here.

But in addition to seeing wives and mistresses fighting at funerals and other unintentionally funny things, Booker learned a lot of lessons through her nine years at the funeral home. Among those lessons, lessons that she now shares as a “death expert” of sorts, was how desensitized young people have become to death, and the impact those deaths have on communities.

Booker turned those lessons into a book, ‘Nine Years Under: Coming Of Age In An Inner-City Funeral Home’. She’s also been in demand for her perspective—and her insights on how these communities can heal—regarding the recent spate of deaths of young Black men at the hands of police—and of each other.

In an interview with the SUN, Booker talks about what her experiences with death have taught her about life, and how to deal with the dismay caused by constantly having to remind people that #BlackLivesMatter.

SB: I was very young when I started working at the funeral home. It was very alarming because we had a lot of young homicide victims come through the funeral home. These were guys that I should have been dating, guys my age. They had no opportunity to lead a full life.  When you’re exposed to death at an early age, it changes your perspective on life. It makes you want to live now. These experiences influence my work.

SUN: Do we take death seriously enough, and what part does the circumstances of life play in our perception of the seriousness of death?

SB: We’re kind of desensitized to death. All you need to do to see that is to go on Twitter. Celebrity death hoaxes go viral almost instantly. This is because the respect and reverence for life has been lost. I think that we need to have real conversations with our children about death. We may that someone has “gone to heaven” or is “no longer with us”, but parents have the responsibility of talking to their children about loss and how to process it.

SUN: Because of some of the things going on in the news, parents have kind of been forced to have those conversations. There have been protests regarding the deaths of young Black men at the hands of police. Should we be talking about those deaths differently?

SB: Homicide is difficult to grasp. There are upwards of 300 homicides a year in Baltimore and the majority of young males. In many of those cases, you will never find a suspect. But what’s troubling now is that in the case of the police killings we actually know who committed the crime. There’s no secrecy. There was video in Eric Garner’s case and in Michael Brown’s case there were witness accounts.

There was an expectation of justice there. Justice is what we all want. There are mothers grieving the loss of their sons. They want answers and a lot of time they don’t get them. It’s troubling to them because they know who did it in these cases, yet there’s still no justice.

SUN: Your father was a police officer.

SG: Dad was on the Baltimore Police Force for 34 years. Typically, I take the side of the police department because Dad was a great cop. The only time he shot someone was when he was a rookie. How he explained it to me was that he was on the way to work and saw a woman who was being abused by her boyfriend. He started to fight the police and my Dad eventually reached for his gun and shot him in the leg.

SUN: Your father could have killed the man, but he didn’t.

SG: That’s true. And I’m sure that he was scared when he faced him. When we look at the situation with the shootings involving police officers, fear plays a major role in what we’ve been seeing. In the shooting of Michael Brown [former Ferguson Police Officer] Darren Wilson said he acted in fear for his safety and not in fear of “the other”. But Brown didn’t have a weapon. He didn’t point a weapon at anyone. Sometimes officers forget whom they’re actually protecting and that’s been my issue. They should shoot to wound instead of shoot to kill.

SUN: Is the relationship between the Black community and police irreparable? If not, how do we fix it?

SG: There’s a lack of trust between police officers and young people. I think that in order for that to change there has to be more accountability. People want to see police departments show some leadership. They want to see police commissioners say, “We don’t tolerate this” and mean it.

SUN: The #BlackLivesMatter movement is focused on the premise that Black life is seen as less than valuable, especially to law enforcement. Do you think that there’s a certain amount of fatalism that this movement is trying to address?

SG: I think that in certain places there’s an expectation that you won’t live to see 90. I’ve witnessed young men giving their lives to Christ, trying to live better and make changes. A lot of young people are angry. Because of what they may be going through at home, they have a lot of aggression and anger and a lack of respect for authority. But in the end, they want love and respect.

SUN: Well, thank you so much for your time Sheri. I really appreciate it.

To get a copy of Nine Years Under, go to www.amazon.com.