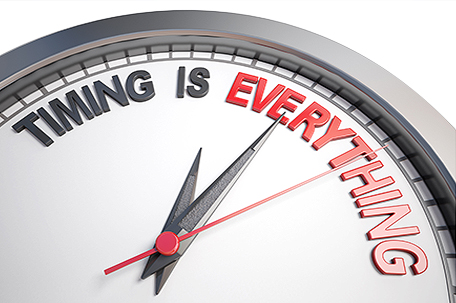 It’s a very popular statement. The statement is often applied to business or inventions. Historically, just as it is today, whomever makes it to the patent office FIRST will mostly become the great success. They get the invention into the marketplace and before the copy cats. By the time others enter the marketplace and copy the invention, the original creator is wealthy, and has credibility and brand loyalty from consumers. Timing is everything.

I personally love track and field events. Even if you’ve never ran track in school you can appreciate the timing in running the Olympics, we see this on a heightened level. A great runner like Usain Bolt demonstrates that timing is everything with his great speed clocked at record times. In other cases, there are races with photo finishes, they’re nail bitters. On television, they show you that sometimes one person beat the other by a faction of millimeter or just by a hair. Timing is everything… it can be the difference between winning and losing.
One person that comes to mind from the Bible is Joseph. I think the story of Joseph’s life can mirror so many things in our lives, but let’s look at how God set up him for a crucial time. In Genesis 37, we find the story of Joseph’s life. He is favored by his father and envied by his brothers (his half-brothers to be accurate). He demonstrated this love by giving him a coat of many colors. No doubt this increased the envy from him brothers. Joseph was a dreamer and once shared a dream whereby his father and brothers were bowing down to him. The dream was represented in bundles of grain. In another dream, he saw his father as the sun, his mother as the moon and his brothers as 11 stars that bow towards him. Needless to say this greatly angered his brothers.

In their envy, his brothers plotted to kill him. Instead they threw him into a hole, sold him and lied to their father about it. Joseph experienced many hard times of being lied about and imprisoned. Ultimately, his gift of dream interpretation found him before the king of Egypt interpreting his dream of great famine on the rise. This gave them time to prepare thus saving all of Egypt and he became a great person, second only to the King. Joseph’s family became effected by the famine and made a trip to Egypt for food. His brothers found themselves bowing before Joseph, not knowing it was him. In the end, Joseph and his family were reunited and because these things happened to Joseph he was at the right place at the right time.

None of us need to go through all of what Joseph did but we are often in places and with people that seem to makes no sense. We may be at a job, living in a neighborhood, or dealing with certain situations that seem to hinder our time of blessings. But all things work together for our good (Romans 8:28).

I enjoy a great meal. There is nothing like something well prepared. There is also nothing like something that is cooked too long or under cooked. If you have ever gotten an overcooked piece of anything it just doesn’t taste good. Something undercooked is scary. I once had someone give me undercooked chicken. Yikes! A good cook takes time to prepare and ensure the meal is ready. Consider all the areas of our lives. Don’t we want things when they are ready… right on time… not a minute too late or even too soon when we aren’t ready. It may appear that God is holding back good things but that is isn’t so. He is aligning you, setting you up, getting people in place and making sure it’s just right for us.

With God timing is everything… and His blessings for you will be right on time!