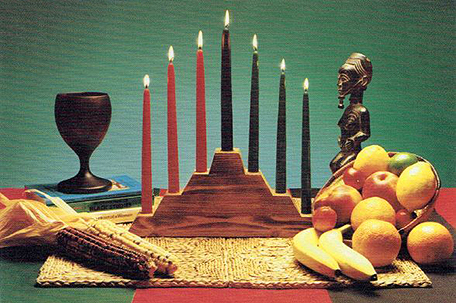 The holiday Kwanzaa is a product of creative cultural synthesis. That is to say, it is the product of critical selection and judicious mixture on several levels. First, Kwanzaa is a synthesis of both Continental African and Diaspora African cultural elements.

This means that it is rooted in both the cultural values and practice of Africans on the Continent and in the U.S. with strict attention to cultural authenticity and values for a meaningful, principled and productive life.

And finally, Kwanzaa is a synthesis in the sense that it is based, in both conception and self-conscious commitment, on tradition and reason. Kawaida, the philosophy out of which Kwanzaa is created, teaches that all we think and do should be based on tradition and reason which are in turn rooted in practice. Tradition is our grounding, our cultural anchor and therefore, our starting point.

It is also cultural authority for any claims to cultural authenticity for anything we do and think as an African people. And reason is necessary critical thought about our tradition which enables us to select, preserve and build on the best of what we have achieved and produced, in the light of our knowledge and our needs born of experience. Through reason rooted in experience or practice, then, we keep our tradition as an African people from becoming stagnant, sterile convention or empty historical reference. Instead, our tradition becomes and remains a lived, living and constantly expanded and enriched experience.

From: “Kwanzaa: A Celebration of Family, Community and Culture – by Maulana Karenga / pp 15-16 / Los Angeles: University of Sankore Press (2008)

The roots of Kwanzaa, then, are in ancient and ongoing continental African first-fruits or first-harvest celebrations. They give Kwanzaa its model and shared values and practices, and its historical groundedness. Rooted in this ancient history and culture, Kwanzaa develops as a flourishing branch of the African cultural tree. It emerges in the context of African American life and struggle as a recreated and expanded ancient tradition. Thus, it bears special characteristics and meaning for African American people.

But it is not only an African American holiday but also a Pan-African one. For it draws from the cultures of various African peoples, and is celebrated by millions of Africans throughout the world African community. Moreover, these various African peoples celebrate Kwanzaa because it speaks not only to African Americans in a special way, but also to Africans as a whole, in its stress on history, values, family, community and culture.

Kwanzaa was established in 1966 in the midst of the Black Freedom Movement and thus reflects its concern for cultural groundedness in thought and practice, and the unity and self-determination associated with this. It was conceived and established to serve several functions.

From: “Kwanzaa: A Celebration of Family, Community and Culture – by Maulana Karenga / p 28 / Los Angeles: University of Sankore Press (2008)

Kwanzaa was created to reaffirm and restore our rootedness in African culture. It is, therefore, an expression of recovery and reconstruction of African culture which was being conducted in the general context of the Black Liberation Movement of the 60’s and in the specific context of The Organization Us. In the 60’s the Black Movement after 1965 was defined by its thrust to “return to the source,” to go “Back to Black.” It stressed the rescue and reconstruction of African history and culture, redefinition of ourselves and our culture and a restructuring of the goals and purpose of our struggle for liberation and a higher level of human life based on an Afrocentric model.

This stress on restoration was evidenced in cultural practices such as renaming of oneself and one’s children with African names, wearing the Natural or Afro hair style and African clothes, relearning African languages, especially Swahili, and reviving African life-cycle ceremonies such as naming, nationalization, rites of passage (Akika and Majando), wedding (Arusi) and funeral (Maziko).

This restorative thrust also involved the struggle for an establishment of Black Studies in the academy and the building of community institutions which restored and reintroduced African culture, i.e., cultural centers, theaters, art galleries, independent schools, etc.

Moreover, there was an emphasis on returning to the African continent physically, culturally and spiritually for cultural revitalization, to reestablish links and build ongoing mutually beneficial and reinforcing relationships. And finally, there was the attempt to recover and begin to live, even relive, African values in the family and community as a way to rebuild and reinforce family, community and culture.

Introducing and Reinforcing of the Nguzo Saba

Kwanzaa was created to introduce and reinforce the Nguzo Saba (the Seven Principles). These values were and are a self-conscious contribution to the general Movement call and the specific Us call and struggle for an African (African American) value system. These seven communitarian African values are: Umoja (Unity), Kujichagulia (Self-Determination), Ujima (Collective Work and Responsibility), Ujamaa (Cooperative Economics), Nia (Purpose), Kuumba (Creativity), and Imani (Faith) (see Chapter 3). Their communitarian character was viewed as especially important because of their collective emphasis, positive composition and their rootedness and prevalence in African culture.

The Nguzo Saba were thus projected as the moral minimum set of African values that African Americans needed in order to rebuild and strengthen family, community and culture and become a self-conscious social force in the struggle to control their destiny and daily life. This stress on the Nguzo Saba was at the same time an emphasis on the importance of African communitarian values in general. And Kwanzaa was conceived as a fundamental and important way to introduce and reinforce these values and cultivate appreciation for them.

From: “Kwanzaa: A Celebration of Family, Community and Culture – by Maulana Karenga / p 31 / Los Angeles: University of Sankore Press (2008)

And finally, Kwanzaa was created as an act of cultural self-determination, as a self-conscious statement of our cultural truth as an African people. It was an important way and expression of being African in a context in which African identity and culture had been devalued and denied. But it was and remains also an important way we as African people speak our special cultural truth in a multicultural world.

The first act of a self-conscious, self-determining people, Us contended, is to redefine and reshape their world in their own image and interest. This, as stated above, is a cultural project in the full sense of the word, i.e., is a total project involving restructuring thought and practice on every level. Moreover, it is a project which requires recovering lost models and memory, suppressed principles and practices of African culture, and putting these in the service of African people in their struggle to free themselves and realize their highest aspirations.

From: “Kwanzaa: A Celebration of Family, Community and Culture – by Maulana Karenga / p 32 / Los Angeles: University of Sankore Press (2008)

One of the most important and meaningful ways to see and approach Kwanzaa is as a self-conscious cultural choice. Some celebrants see Kwanzaa as an alternative to the sentiments and practices of other holidays which stress the commercial or faddish or lack an African character or aspect. But they realize this is not Kwanzaa’s true function or meaning. For Kwanzaa is not a reaction or substitute for anything. In fact, it offers a clear and self-conscious option, opportunity and chance to make a proactive choice, a self-affirming and positive choice as distinct from a reactive one.

Likewise, Kwanzaa is a cultural choice as distinct from a religious one. This point is important because when the question arises as to the relation between choosing Kwanzaa or/and Christmas, this distinction is not always made. This failure to make this distinction causes confusion, for it appears to suggest one must give up one’s religion to practice one’s culture. Whereas this might be true in other cases, it is not so in this case.

For here, one can and should make a distinction between one’s specific religion and one’s general culture in which that religion is practiced. On one hand, Christmas is a religious holiday for Christians, but it is also a cultural holiday for Europeans. Thus, one can accept and revere the religious message and meaning but reject its European cultural accretions of Santa Claus, reindeer, mistletoe, frantic shopping, alienated gift-giving, etc.

This point can be made by citing two of the most frequent reasons Christian celebrants of Kwanzaa give for turning to Kwanzaa. The first reason is that it provides them with cultural grounding and reaffirmation as African Americans. The other reason is that it gives them a spiritual alternative to the commercialization of Christmas and the resultant move away from its original spiritual values and message. Here it is of value to note that there is a real and important difference between spirituality as a general appreciation for and commitment to the transcendent, and religion which suggests formal structures and doctrines.

Kwanzaa is not a religious holiday, but a cultural one with an inherent spiritual quality as with all major African celebrations. This inherent spiritual quality is respect for the Transcendent, the Sacred, the Good, the Right. Thus, Africans of all faiths can and do celebrate Kwanzaa, i.e., Muslims, Christians, Black Hebrews, Jews, Buddhists, Bahai and Hindus as well as those who follow the ancient traditions of Maat, Yoruba, Ashanti, Dogon, etc. For what Kwanzaa offers is not an alternative to their religion or faith but a common ground of African culture which they all share and cherish. It is this common ground of culture on which they all meet, find ancient and enduring meaning and by which they are thus reaffirmed and reinforced.