The giant will fall 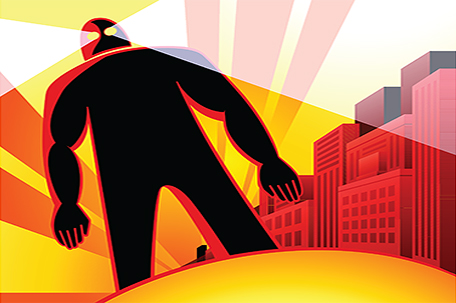 I used to sing along with the catchy tune when I watched the familiar commercials used to market vegetables. The “Jolly Green Giant” is a fictitious character rooted in folklore and fairy tales. Yet, this iconic advertising figure fascinated me.

It wasn’t until later that I learned real-life giants—the kind that take on various forms and often stand in the way of destiny—aren’t friendly or green.

There are many things the years have taught me.

Looking retrospectively, I chuckle about how naïve and carefree I used to be.

When I was a little girl, I loved playing dress up and walking around in my mother’s shoes.

She had the coolest high heels and I would go trudging around the house in them, barely able to keep my balance.

Playing pretend was amusing. My love of it was not unique. Most children get a kick out of that at some point.

I romanticized the idea of adulthood. I just couldn’t wait to be grown and gone so I could do whatever I imagined I wanted to.

Having no adults to supervise, instruct, or set the course for my life was exciting to me.

Being independent, in my mind, meant living a free, unrestricted lifestyle, full of thrills and fun.

But thrills quickly gave way to bills and the quest for fun was replaced with the need to be functional, and self-sufficient.

Responsibilities mounted quickly and there was no shortage of things to do.

Although my youth was not without challenges, there were plenty of things I didn’t have to think about.

I had no idea the tremendous pressure my parents were under. Raising a family and navigating life’s challenges takes much prayer, work and balance.

These days, I totally get what it means to be all grown up and I see firsthand what sort of obligations come along with that.

Being free isn’t actually free. It comes at a cost.

It takes much sacrifice.

I now realize something I didn’t when I was role-playing: we tend to over-romanticize what we have never experienced.

We have this false notion that if we can just get there—wherever there is—all our heartaches, troubles and concerns will be over. The sky will be bluer, the grass greener and the sun brighter on the other side.

Even the most exciting things have mundane elements. The greatest opportunities are often accompanied by the greatest opposition. Walking through doors God opens doesn’t mean you always know what you’re walking into.

As a parent, I do my best to prepare our children for the realities of life. I tell them there will be problems. But as long as the ultimate problem-solver is on their side, they have no cause to worry.

Often, when you achieve a long-held dream, or arrive at a place you once daydreamed about, it doesn’t always live up to your expectations, does it?

As the saying goes, “It’s not all it’s cracked up to be.”

If, before you got there, you deluded yourself into believing things would be perfect, soon after, comes that rude awakening.

That cloud nine float gets a pin stuck in it called reality as you come crashing down to earth.

There are no perfect circumstances. Further, there is no one-size-fits-all solution to the unique issues we face, even in our Promised Land.

Who knew there would be problems that came along with those promises?

Welcome to the real world.

Remember in Numbers 13 when God had assured the Israelites they would possess the land of Canaan—their Promised Land?

Well, when Moses, at the Lord’s command, sent spies from each of the twelve tribes to scope out the land which was being given to them as an inheritance, they were not prepared for what they saw.

In verses 18-20 he told them, “See what the land is like and whether the people who live there are strong or weak, few or many.

“How is the soil? Is it fertile or poor? Are there trees in it or not? Do your best to bring back some of the fruit of the land. (It was the season for the first ripe grapes.)”

When they got over there, oh boy!

They saw menacing giants that terrified them. The Bible says 10 of the 12 Israelite spies came back with a negative, horrifying story of war-like giants they were sure would consume them.

Even though it was harvest season and they brought back some good things like huge clusters of grapes, pomegranates and figs, the not-so-good things shook them up.

Friend, are you shaken up by negative manifestations you see right now, even though God has given you positive revelations of your future?

As I touched on briefly, every promise also has a problem.

That’s what we learn from the story of David and Goliath in 1 Samuel 17:45.  God’s manservant told that mocking giant, “You come to me with a sword and with a spear and with a javelin, but I come to you in the name of the LORD of hosts, the God of the armies of Israel, whom you have defied.”

Even though it seemed unlikely, David defeated Goliath and you will defeat whatever enemy stands in the way of your destiny.

To give you a boost of confidence, I’m stirring Numbers 13:30 NLT into your cup of inspiration. These are the words of Caleb, who silenced the panicked people and expressed his belief in supernatural equipping. “’Let’s go at once to take the land,’ he said. ‘We can certainly conquer it!’”

As you drink down the contents of your cup, God is infusing your spirit with the assurance you need to slay the giants in your life. You will realize that what is coming against you right now is no match for who is for you.

You are already victorious. You just have to be bold, courageous and faith-filled enough to charge ahead when everything around you is screaming, “Retreat!”

This battle is won. The fight is fixed.

As you resist fear and walk by faith, you will lay hold of your destiny.

At this moment, as you take in this word, God’s anointing is awakening the conquering warrior within. Go forth. Possess the promise.

He already said you can have it. His favor is with you.

As President & CEO of Empowering Everyday Women (EEW) Online Magazine, America’s #1 web publication for Christian women of color, Dianna Hobbs and her team endeavor to inform, uplift, inspire, and empower women of God to live out their faith in an increasingly faithless society.

You are not here by accident