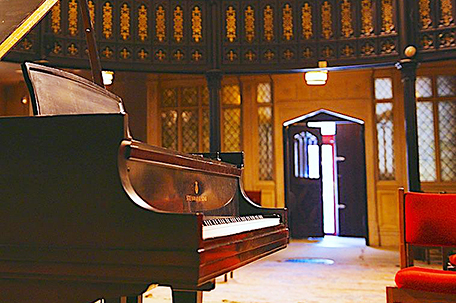 The series explores the vanguard of jazz piano. Pianist, Fred Hersch, who opened the 2018-19 season in September 2018 with a benefit performance and book signing, is also the series curator. Hersch organized this series of solo performances that continues through the spring of 2019. Drawing from four decades of experience as a musician and teacher, Hersch selected three New York-based artists that are “bright young lights of the jazz piano scene: Glenn Zaleski, Sulllivan Fortner and Micah Thomas.”

An exploratory artist, outspoken activist, influential educator and possessor of one of the most personal and expressive pianistic styles in improvised music, Fred Hersch has led a singular life that has shaped one of the most acclaimed and influential voices in modern jazz. At the forefront of the music for more than three decades, he’s earned countless awards and accolades, including 12 Grammy® nominations. Hailed by Vanity Fair as “the most arrestingly innovative pianist in jazz over the last decade,” he stands as a defining figure in several different contexts, credited with more than 40 albums that span breathtaking solo recitals, compelling duos, gold-standard trios and innovative chamber pieces. Hersch has told his inspiring story in his new memoir, “Good Things Happen Slowly: A Life In and Out of Jazz” in the feature documentary, “The Ballad of Fred Hersch,” and on stage in the confessional jazz-theater piece, “My Coma Dreams.”

“From my more than 35 years teaching jazz piano at many elite conservatories to my more than 40 years living in New York City and keeping and ear to the ground, I have been aware of — and in many cases, mentored — some of the bright young lights of the jazz piano scene.” Hersch said, in a curator’s statement. “My series this year shines some light on three particularly strong pianists. Playing solo is a true test of pianistic resources, imagination, and awareness of all of the many historical styles of jazz piano. And these young artists are more than up to the task.”

Pianist and composer Micah Thomas grew up in Columbus, Ohio. Since his sophomore year of high school in Columbus, Ohio, Thomas has been gigging regularly with violinist Christian Howes, accompanying him on tours across the country—Thomas has been a regular faculty member at Howes’ annual Creative Strings Workshop since 2015. Thomas frequently appears with the Columbus Jazz Orchestra as a guest artist, performing with John Clayton and Joshua Redman for their 45th anniversary concert series in 2017, and has performed throughout Ohio with distinguished musicians including JD Allen, Billy Contreras, Eddie Bayard, George Delancey, Cedric Easton, and Bobby Floyd.

In 2015, Thomas moved from Ohio to New York to pursue a BM in Jazz Studies at the Juilliard School and is now performing in venues throughout the city, both as a leader of his own groups and as a sideman for such luminaries as Lage Lund, Etienne Charles, Immanuel Wilkins, Joel Ross, Gabe Schnider, Tivon Pennicott, Harish Raghavan, Stacy Dillard, and Joshua Redman. He appeared as a guest with Wynton Marsalis’ Jazz at Lincoln Center Orchestra in 2017 alongside Sullivan Fortner, Aaron Diehl, and Joel Wenhardt and performed solo piano at the 2018 Newport Jazz Festival.

St. Stephen’s is a historic parish, established in Philadelphia in 1823. In 2017, St. Stephen’s was reborn as a new model of church, one that is redefining the idea of congregation and forging a non-traditional path. Much has changed since 1823, and spirituality is no exception. St. Stephen’s is committed to meeting this new challenge, to looking toward the future while celebrating our history and journey.