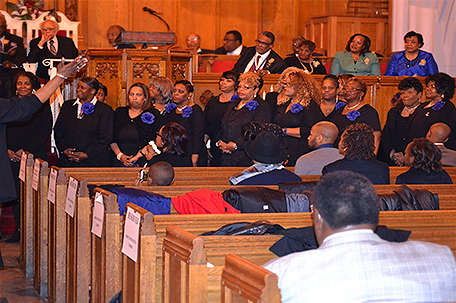 ABOVE PHOTO:  Rome Emmanuel Baptist Church choir, singing during Installation Service for their Pastor, Rev. Darrian A. Brown, as the 134th President of the Baptist Pastors and Ministers Conference.

The Baptist Pastors and Ministers Conference installed the Rev. Darrian A. Brown as its 134th President in an installation service held in the church Rev. Brown pastors, the Rome Emmanuel Baptist Church, 1100 W. Lehigh Ave.

The Installation service was so outstanding, we thought it worthy to do a story to share with Philadelphia readers as we observe Black History Month, let’s look at the history of two great church organizations that joined together and became one. 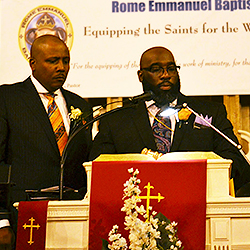 Pastor Darrian A. Brown (at left), incoming president of the BPMC, standing next to outgoing president, Bishop Sutton.

The Conference met at various homes and churches for three years. In 1897, an invitation for a permanent meeting place was extended by the Shiloh Baptist Church through its Pastor, the late Rev. William H. Philips. Since that time, the conference has had several permanent homes, with the present place of meeting being the Second Mt. Zion Baptist Church, where Rev. James Moore, Sr. is the Pastor. 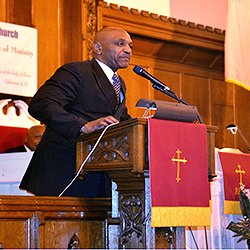 Pastor Jay Broadnax, the newly installed President of Black Clergy of Philadelphia and Vicinity was also on hand for the Installation service.

Born out of a need for a closer fellowship where a rapport could be established and maintained among ministers, laymen and Churches from all Associations and Conventions, the Baptist Ministers Conference of Philadelphia and Vicinity has continued over the years to provide a common forum for the discussion and solution of spiritual, sociological, economic and intellectual problems, that faced those people, the churches and communities in which its members are influential.

For 100 years, the Conference has been very active in supporting denominational schools, and many other worthwhile endeavors.

Meanwhile, the Missionary Baptist Pastors Conference was organized under the leadership of the late Rev. I. W. Foulkes in 1943. The Conference had at its inception, 13 members and its home base was the Golden Star Baptist Church, on Ridge Avenue. The purpose of the Conference was to provide a peer fellowship for those brethren who presided over small or struggling churches, however as the membership gained citywide popularity, pastors that didn’t fit into that category embraced the fellowship.

In 1968, under the visionary leadership of conference president, the Rev. James S. Hall, Pastor of Triumph Baptist Church, the citywide Revival was initiated. The Revival has provided exemplary teaching and preaching by nationally known Evangelists, Revivalists, and Lectures for the tri-state area. The purpose of the revival is to reach the unchurched, save the unsaved, revive and strengthen believers and make a unified statement of our faith in the areas of witnessing and evangelism.

It was truly a very stately installation of officers for two key Pastors’  and Ministers organizations. On the heels of the Baptist Pastors and Ministers Conference Installation January 30th, the very next day, the new administration for the Black Clergy of Philadelphia and Vicinity were sworn into office during their special Installation service. The new president of the Black Clergy of Philadelphia and Vicinity is the Rev.  Jay B. Broadnax, Pastor of Mount Pisgah AME Church in Philadelphia.